It's a bunch of people getting together on a wiki at a particular time to do a bunch of writing. It's like an online party! Heck no, it is an online party! It's also an excuse for infrequent wikiers to show up and party hardy; to exchange ideas with people we might not "meet" otherwise.

But hey, why not show up in between the write-ins, too!

Write-a-Thons happen the first Wednesday of every month. The next Write-a-Thon is Wednesday, May 7th, 2008. Save The Date! Put it on your calendar! Set yourself a reminder!

Any new article you create, and any edit you make to somebody else's Write-a-Thon article during that time period will count, though to be a bona fide partier, you have to write your new articles when it's that day in your part of the world.

Our first Write-a-Thon took place Wednesday, August 1, 2007 and was considered a roaring good time--we had about 30 partiers creating something like 50 articles, and editing lots.

What are the rules?

Rules? This is a party! There are no rules!

Well, OK, maybe there are a couple rules:

(You can also be inspired by some of the theme suggestions, below. Or propose one yourself--just scroll down. Or write about something that takes your fancy--or the first thing that comes into your head--JUST DO IT!)

Check it out: Start an article!

Now (this time anyway) easier than ever! Stubs are not only permitted they are encouraged!

Well, it's still Wednesday in this Portland and Honolulu, so Aleta's back at it. Made a list of the other Derek's date's works, including her only epistolary novel. Also, I call samosas samusas so I said something about that. Aleta Curry 23:58, 2 April 2008 (CDT) 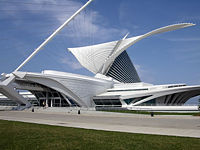 The The "brise soleil" opened at the Milwaukee museum of art. Designed by architect Santiago Calatrava

Going to go right now and see if I understand that. There was a TV programme called Quantum Leap--is that related?? Aleta Curry 23:47, 1 April 2008 (CDT)

Aleta fully intended to pass John some water, but was distracted by his beautiful photos. Planning to drag John off porch later. Aleta Curry 23:41, 31 March 2008 (CDT)

John, still in a stupor, hammered on the window for the water, then headed off to get some more snaps elsewhere. He spotted Jimmy Wales heading the other way. John Stephenson 08:41, 1 April 2008 (CDT)

John still looks much the worse for wear. Aleta hands him a spritzer. Couldn't hurt.

Still being a party pooper until she has finished work (soz: will be raring to write once she gets home), Louise is unable to resist commenting at this point that *now* she knows why butterscotch cookies are so nice and crunchy. Learn something new every day, especially here!Louise Valmoria 22:55, 1 April 2008 (CDT)

Go ahead, admit it!

My mind has too many neurons firing as a result of having to worry about so much going on today and this coming week that I simply do not have the mental patience to participate this month Template:Codefrown. --Robert W King 11:16, 2 April 2008 (CDT)

Sorry to miss out this time, but am jet lagged and functioning even less efficiently than usualGareth Leng 11:31, 2 April 2008 (CDT)

I was literally unable to access the Internet all day Wednesday...after I got up, I was travelling, and when I got to the hotel, they couldn't fix the stupid Internet connection! But...I will soon have excellent news--big news for us. --Larry Sanger 17:42, 4 April 2008 (CDT)

I'm making Irish Stew tonight: That's got potatoes in it. Just meat, potatoes, some tomato paste, fried onions and maybe some carrots boiled up in a good meat stock. Or you could do shepherds pie. I think I know over 100 ways to cook potatoes. A very versatile food. Derek Harkness 06:17, 2 April 2008 (CDT)

Irish stew is a stew made with the potatoes in the same pot as the meat. Beyond that you can stick in just about any vegetable you have to hand - depending on the seasons. I double checked and I can't find any recipes on thin that don'thave onions. I always fry my onions till lightly golden before adding to the stew as it gives better flavour. Tomato paste is not in every recipe but it is in many. You shouldn't use a lot. By which I mean, in my 8 pints of stew there is 4 ounces of tomato paste. It's just to enhance your gravy a little and make it less watery. Derek Harkness 10:06, 2 April 2008 (CDT)

Oh, I agree the onions are mandatory - just I've never seen a recipe that didn't say "throw 'em raw into the pot" :P Having to fry stuff up separately kinda defeats the purpose of a one-pot dinner, for me anyway. Anyway - enjoy! Anton Sweeney 10:42, 2 April 2008 (CDT)

Always one pot. Put the onions in first and brown them then add the meat and other veg and warm them up. After a few minutes frying add your stock, herbs and spices and boil for a long time. Last add your cubed potatoes. When the potatoes are soft, eat. Derek Harkness 06:49, 3 April 2008 (CDT)

I actually did make Samosa just now and will probably dabble with your suggestions for Irish stew tonight--thanks guys :) Louise Valmoria 00:02, 3 April 2008 (CDT)

I'm going to have to try making these Samosas. Here in China I get cravings, not for English food, but for Indian food. Derek Harkness 06:49, 3 April 2008 (CDT)

Oh, darn, it's no longer the first Wednesday anywhere on the planet.

Not only couldn't I read all the new articles on the day they were written, but for the first time, I couldn't see all the edits done on the second--my 'Recent Changes' couldn't handle the volume.

Soooo....I've probably missed some shy guys. You'll all have to make sure you sign in yerselves next month!

Thanks a bunch, everyone!

Go ahead and propose one!

Great Men (and women too)

What do you say we get some biographies started. No matter what workgroup you belong to, there will be a Great Person for your group so this is one that everybody can work on. You might do a famous scientist, maybe an actor or actress, perhaps a national leader, or whatever takes your fancy. Derek Harkness 07:20, 31 March 2008 (CDT)

We don't even have an article on Tibet yet! We know China has blocked Wikipedia. Has China blocked Citizendium? Meg Ireland 19:15, 3 April 2008 (CDT)

Citizendium is not blocked in China. Also, the English Wikipedia is not blocked at the moment either. We don't have articles about most places yet. We don't even have a completed article about China let alone smaller places. Derek Harkness 20:16, 3 April 2008 (CDT)

Why not themes on holidays? May Day is that week after all. We can getting cracking on Maypole and Moriss dancers and of course Fetes. Possibly tie in other pagan themes, stonehenge and such. Or even go with the obscure maritime connection and make a start on the Titanic, (may day may day). Of course there is the labor movement too and the Haymarket riot for those who want to stick to politics. Anyway, you get the idea. Chris Day 22:29, 3 April 2008 (CDT)