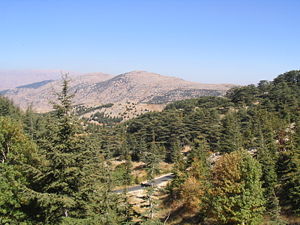 A view from Barouk, in the Shouf district of Mount Lebanon, showing the Mountain's famous cedars.

Mount Lebanon, also called the Lebanon Mountains or simply the Mountain, is a range of mountains in central Lebanon, with extensions (the Jabal Amil in the south and the Akkar in the north) through the entire length of the country. Mount Lebanon is fairly rugged, and over the centuries has provided a refuge from persecution for ethnic and religious groups such as the Maronites and the Druze-who between them form most of the Mountain's population today. Mount Lebanon is also famous for its cedar forests, which provided wood to build the ships of the Phoenicians in antiquity, were mentioned in the Bible, and became one of Lebanon's national symbols-so much that one appears prominently on the country's flag today.