From Citizendium
< Archive:Monthly Write-a-Thon
Jump to navigation Jump to search 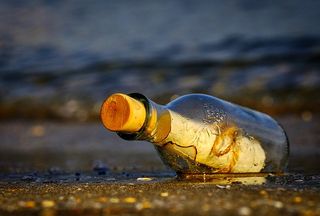 Message in a bottle.

The next Write-a-Thon will take place on Sunday, January 17, 2021--for the second time in nearly a decade!

Hey, WhatsApp? Messaging and Missives is our theme, dedicated to all forms of communication, from letters to social media via bottles or tin can telephones. And of course, we're not just interested in smartphones or email, but languages, writing and other forms of communication too (whale song? Semaphore?).

Have started and worked on Invisiblehate.org which is a web site devoted to messaging about opposition to, and efforts to remove, the 700 remaining Confederate statues and more than 1,600 other symbols of racial division. Note that the link in the first sentence doesn't work because in creating the title, I inadvertently named it invisibleHate.com. As soon as someone with the necessary technical expertise can correct my error, the link in the first sentence will turn blue and the one in the second will be red, which will be at my level of understanding such things. There is currently no Wikipedia article on this topic, although I suspect that will come soon. Although I've tried to make it neutral and nonpartisan reporting, this one could be controversial, and might even become a target of internet trolls, so it bears watching. Roger A. Lohmann (talk) 20:52, 17 January 2021 (UTC)

Also staggered to realize that my home town (Paris, Tennessee) has one of the targeted Confederate monuments standing on the lawn of its court square, which I never even noticed before now. Sigh.Pat Palmer (talk) 03:18, 18 January 2021 (UTC)

I think I should get brownie points for continuing to plug along on Claude Shannon, a foundational figure in computer hardware, information theory, and Cryptography, without which all of today's digital communication would be impossible. His work on signaling was also critical for some areas of Biology. Pat Palmer (talk) 03:09, 18 January 2021 (UTC)

There has been (and continues to be) universal agreement to award you brownie points for plugging along with Claude, but the BP judges' panel are hung up on just how many points to award! Roger A. Lohmann (talk) 14:05, 18 January 2021 (UTC)

Some among the panel are currently checking the value of a brownie point these days. How much is a brownie point worth? Wikipedia doesn't seem to have an article on that along with 38 pages of discussion and argument. Roger A. Lohmann (talk) 14:08, 18 January 2021 (UTC)

Great job setting up Message (disambiguation); I am mulling how or whether "Message" should or could be coordinated with signals, protocols, semaphores, smoke signals and the like which do not actually include the word "message". Pat Palmer (talk) 03:48, 18 January 2021 (UTC)