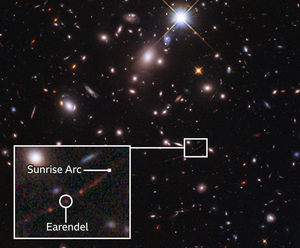 The Sunrise Arc is smeared across 15 seconds of arc, in the Constellation Cetus, by the gravitational lens that makes it visible.

The Sunrise Arc is the name of a small distant galaxy, first detected in 2016 by Dan Coe, of John Hopkins University.[1] The galaxy has an enormous red shift, because it lies 12.9 billion lightyears from Planet Earth, and the light we see from it was emitted when the Universe was only 900 million years old.

The galaxy was detected by the Reionization Lensing Cluster Survey (RELICS) Program. That program relies on gravitational lensing by distant galaxies to detect even more distant objects, objects magnified by those gravitational lenses, that would otherwise be too dim to be detectable.

Due to gravitational lensing by a supercluster of galaxies that lie between Planet Earth and The Sunrise Arc the light from that galaxy has been smeared across 15 seconds of arc.

In June of 2021 Brian Welch, a PhD student of Coe's, published a paper describing star cluster's within the galaxy that were surprisingly studiable, due to the lensing.[2]

On March 30, 2022, Welch and a team of colleagues announced their conclusion that, within the galaxy, they had found a bright blue supergiant Welch dubbed Earendel - the oldest and most distant star to ever be detected.[3]