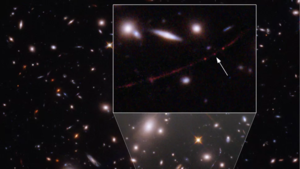 "The most distant star yet seen, called Earendel, is indicated by an arrow in the inset of this image from the Hubble Space Telescope that captured the star from 12.9 billion light-years away using a gravitational lens. (Image credit: NASA, ESA, B. Welch (JHU), D. Coe (STScI), A. Pagan (STScI) )"[1]

On March 30, 2022, Astronomers using the Hubble Space Telescope published a paper in Nature, announcing they had found a star they dubbed Earendel that was 12.9 billion light-years from Planet Earth.[1][2] At 12.9 billion light years it would be not only the most distant star yet detected, but also the oldest.

Detection of the star was possible because it was at the focus of a Gravitational lens.[1] Forbes magazine reported that the star was detected during the work of the Reionization Lensing Cluster Survey (RELICS) Program.[2] RELICS job was to find distant galaxies worthy of further study by the new James Webb Space Telescope.

The official designation is WHL0137-LS, and it is at least 50 times the mass of Sol, our sun, and on the order of a million times as bright.[3] The Guardian reports that it is a blue supergiant. The unofficial name, Earendel, is a word from the Old English language, meaning "first light", as this star shone within the first billion years of our Universe.

Ars Technica noting that the almost complete absence of elements heavier than Helium in the early Universe meant stars could be much more massive than stars today, reported the star might be 500 times the mass of Sol.[5]

The galaxy Earendel was found in is known as "The Sunrise Arc", as the gravitational lensing from a supercluster between us and them has smeared the galaxy into a long arc.[5][6]

Brian Welch, the lead author of the study that announced the star, said "This finding gives us an opportunity to study a star in detail in the early universe".[1] According to The Guardian Welch, is still working on his PhD.[3]

Welch assembled a large team to analyze Earendel, and confirm that it was a star, or a pair of binary stars.[6] That team studied the images for three and a half years, prior to publication. Magnification from gravitational lenses is lumpy, due to the lumpiness of the galaxies that form the lenses.[5] This means some regions get much higher levels of magnification than nearby regions. Objects that are near the lens' critical curve, are particularly highly magnified. Earendel's closeness to the lens's critical curve meant the lens was magnifying it 1,000 to 40,000 times.

The star considered the most distant, prior to finding Earendel, was detected in 2018, and, at 9 billion lightyears, was over four times older.[2]