There are three main specifications that characterize a current mirror. The first is the current level it produces. The second is its AC output resistance, which determines how much the output current varies with the voltage applied to the mirror. The third specification is the minimum voltage drop across the mirror necessary to make it work properly. This minimum voltage is dictated by the need to keep the output transistor of the mirror in active mode. The range of voltages where the mirror works is called the compliance range and the voltage marking the boundary between good and bad behavior is called the compliance voltage. There are also a number of secondary performance issues with mirrors, for example, temperature and bias stability.

For small-signal analysis the current mirror can be approximated by its equivalent Norton impedance . 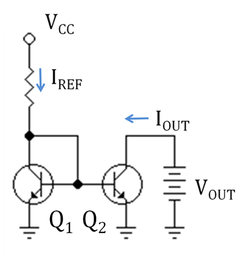 The simplest bipolar current mirror consists of two transistors connected as shown in the figure. Transistor Q1 is connected so its collector-base voltage is zero. Consequently, the voltage drop across Q1 is VBE, that is, this voltage is set by the diode law and Q1 is said to be diode connected. (See also Ebers-Moll model.) It is important to have Q1 in the circuit instead of a simple diode, because Q1 sets VBE for the transistor Q2. If Q1 and Q2 are matched, that is, have substantially the same device properties, and if the mirror output voltage is chosen so the collector-base voltage of Q2 also is zero, then the VBE-value set by Q1 results in an emitter current in the matched Q2 that is the same as the emitter current in Q1. Because Q1 and Q2 are matched, their β0-values also agree, making the mirror output current the same as the collector current of Q1. The current delivered by the mirror for arbitrary collector-base reverse bias VCB of the output transistor is given by (see bipolar transistor):

where VT = thermal voltage (kBT/q ≈ 25 mV at 290K, kB is the Boltzmann constant), IS = reverse saturation current, or scale current; VA = Early voltage. This current is related to the reference current IREF when the output transistor VCB = 0 V by:

When Q2 has VCB > 0 V, the transistors no longer are matched. In particular, their β-values differ due to the Early effect, with

where VA is the Early voltage and β0 = transistor β for VCB = 0 V. Besides the difference due to the Early effect, the transistor β-values will differ because the β0-values depend on current, and the two transistors now carry different currents (see Gummel-Poon model).

Further, Q2 may get substantially hotter than Q1 due to the associated higher power dissipation. To maintain matching, the temperature of the transistors must be nearly the same. In integrated circuits and transistor arrays where both transistors are on the same die, this is easy to achieve. But if the two transistors are widely separated, the precision of the current mirror is compromised.

Additional matched transistors can be connected to the same base and will supply the same collector current. In other words, the right half of the circuit can be duplicated several times with various resistor values replacing R2 on each. Note, however, that each additional right-half transistor "steals" a bit of collector current from Q1 due to the non-zero base currents of the right-half transistors. This will result in a small reduction in the programmed current.

An example of a mirror with emitter degeneration to increase mirror resistance is found in two-port networks.

For the simple mirror shown in the diagram, typical values of

will yield a current match of 1% or better. 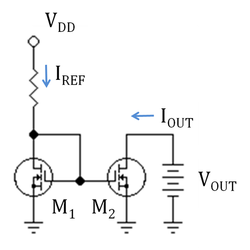 The basic current mirror can also be implemented using MOSFET transistors, as shown in the adjacent figure. Transistor M1 is operating in the saturation or active mode, and so is M2. In this setup, the output current IOUT is directly related to IREF, as discussed next.

The drain current of a MOSFET ID is a function of both the gate-source voltage and the drain-to-gate voltage of the MOSFET given by ID = f (VGS, VDG), a relationship derived from the functionality of the MOSFET device. In the case of transistor M1 of the mirror, ID = IREF. Reference current IREF is a known current, and can be provided by a resistor as shown, or by a "threshold-referenced" or "self-biased" current source to insure that it is constant, independent of voltage supply variations.[1]

Using VDG=0 for transistor M1, the drain current in M1 is ID = f (VGS,VDG=0), so we find: f (VGS, 0) = IREF, implicitly determining the value of VGS. Thus IREF sets the value of VGS. The circuit in the diagram forces the same VGS to apply to transistor M2. If M2 also is biased with zero VDG and provided both transistors M1 and M2 have good matching of their properties, such as channel length, width, threshold voltage etc., the relationship IOUT = f (VGS,VDG=0 ) applies, thus setting IOUT = IREF; that is, the output current is the same as the reference current when VDG=0 for the output transistor, and both transistors are matched.

The drain-to-source voltage can be expressed as VDS=VDG +VGS. With this substitution, the Shichman-Hodges model provides an approximate form for function f (VGS,VDG):[2]

Because of channel-length modulation, the mirror has a finite output (or Norton) resistance given by the rO of the output transistor, namely (see channel length modulation):

For Shichman-Hodges model, f -1 is approximately a square-root function.

A useful feature of this mirror is the linear dependence of f upon device width W, a proportionality approximately satisfied even for models more accurate than the Shichman-Hodges model. Thus, by adjusting the ratio of widths of the two transistors, multiples of the reference current can be generated.

It must be recognized that the Shichman-Hodges model[5] is accurate only for rather dated technology, although it often is used simply for convenience even today. Any quantitative design based upon new technology uses computer models for the devices that account for the changed current-voltage characteristics.[6] Among the differences that must be accounted for in an accurate design is the failure of the square law in VGS for voltage dependence of the current, and the very poor modeling of VDS drain voltage dependence provided by λVDS, leading to abysmal output resistance estimates. Another failure of the equations that proves very significant is the inaccurate dependence upon the channel length L. A significant source of L-dependence stems from λ, as noted by Gray and Meyer, who also note that λ usually must be taken from experimental data.[7] 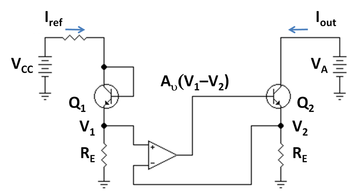 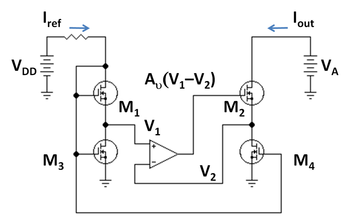 (PD) Image: John R. Brews
MOSFET version of wide-swing current mirror; M1 and M2 are in active mode, while M3 and M4 are in Ohmic mode and act like resistors.

The adjacent figure shows a bipolar mirror using negative feedback to increase output resistance. Because of the op amp, these circuits are sometimes called gain-boosted current mirrors. Because they have relatively low compliance voltages, they also are called wide-swing current mirrors. A variety of circuits based upon this idea are in use,[8][9][10] particularly for MOSFET mirrors because MOSFETs have rather low intrinsic output resistance values. A MOSFET version of the bipolar circuit is shown in the figure underneath where MOSFETs M3 and M4 operate in Ohmic mode to play the same role as emitter resistors RE in the bipolar circuit, and MOSFETs M1 and M2 operate in active mode in the same roles as mirror transistors Q1 and Q2 in the bipolar mirror. An explanation follows of how the bipolar circuit works.

The operational amplifier is fed the difference in voltages V1 - V2 at the top of the two emitter-leg resistors of value RE. This difference is amplified by the op amp and fed to the base of output transistor Q2. If the collector base reverse bias on Q2 is increased by increasing the applied voltage VA, the current in Q2 increases, increasing V2 and decreasing the difference V1 - V2 entering the op amp. Consequently, the base voltage of Q2 is decreased, and VBE of Q2 decreases, counteracting the increase in output current.

If the op amp gain Av is large, only a very small difference V1 - V2 is sufficient to generate the needed change in base voltage ΔVB for Q2, namely

Consequently, V1 is held close to V2 and the currents in the two leg resistors are held nearly the same, and the output current of the mirror is very nearly the same as the collector current IC1 in Q1, which in turn is set by the reference current as

where β1 for transistor Q1 and β2 for Q2 differ due to the Early effect if the reverse bias across the collector-base of Q2 is non-zero.

An idealized treatment of output resistance is given in the footnote.[11] A small-signal analysis for an op amp with finite gain Av but otherwise ideal is based upon the adjacent small-signal circuit (β, rO and rπ refer to Q2). To arrive at this circuit, notice that the positive input of the op amp in the bipolar circuit is at AC ground, so the voltage input to the op amp is simply the AC emitter voltage Ve applied to its negative input, resulting in a voltage output of −Av Ve. Using Ohm's law across the input resistance rπ determines the small-signal base current Ib as:

Combining this result with Ohm's law for RE, Ve can be eliminated, to find:[12]

Kirchhoff's voltage law from the test source IX to the ground of RE provides:

Substituting for Ib and collecting terms the output resistance Rout is found to be:

a substantial improvement over the basic mirror where Rout = rO.

The small-signal analysis of the MOSFET version of this wide-swing mirror is obtained from the bipolar analysis by setting β = gm rπ in the formula for Rout and then letting rπ → ∞. The result is

This time, RE is the resistance of the source-leg MOSFETs M3, M4. Unlike the bipolar version, however, as Av is increased (holding RE fixed in value), Rout continues to increase, and does not approach a limiting value at large Av.

For the bipolar circuit, a large op amp gain achieves the maximum Rout with only a small RE. A low value for RE means V2 also is small, allowing a low compliance voltage for this mirror, only a voltage V2 larger than the compliance voltage of the simple bipolar mirror. For this reason this type of mirror also is called a wide-swing current mirror, because it allows the output voltage to swing low compared to other types of mirror that achieve a large Rout only at the expense of large compliance voltages.

With the MOSFET circuit, like the bipolar circuit, the larger the op amp gain Av, the smaller RE can be made at a given Rout, and the lower the compliance voltage of the mirror.

There are many sophisticated current mirrors that have higher output resistances than the basic mirror (more closely approach an ideal mirror with current output independent of output voltage) and produce currents less sensitive to temperature and device parameter variations and to circuit voltage fluctuations. These multi-transistor mirror circuits are used both with bipolar and MOS transistors. These circuits include: