(PD) Image: John R. Brews
A planar npn bipolar junction transistor as might be constructed in a integrated circuit.

In electronics, the bipolar transistor, more completely the bipolar junction transistor, is a three-terminal semiconductor device used for switching and amplification. In concept it consists of two back-to-back pn-diodes, forming either a pnp or an npn sandwich, where p refers to a semiconductor doped to produce positively-charged carriers (holes) and n refers to a semiconductor doped to provide negatively-charged carriers (electrons). Moreover, the center region is thin enough to allow carriers injected from one of the end layers (the emitter E) to actually diffuse across the center region (the base B) and be collected by the other end region (the collector C).

Very small changes in the emitter-base junction voltage have an exponential influence over the number of carriers injected from the emitter, and so the base has enormous control over the current diffusing across the base to the collector. Moreover, the current consumed by the base in normal operation is very small, so the device serves well to amplify either a current or a voltage signal applied to the base.

The bipolar transistor was the historically first transistor invented. Prior to its invention in 1947 by Bardeen, Brattain and Shockley at Bell Laboratories, semiconductor devices were only two-terminal devices, like diodes and rectifiers. More of the history and development of this device can be found in an historical article by Shockley[1] and a more recent history.[2] 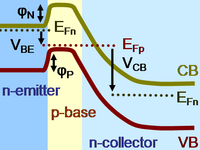 Using a band diagram as shown to the right, the operation can be understood. The diagram shows an npn transistor biased in active mode. It is a one-dimensional section vertically through the center of the emitter. The conduction band labeled CB shows the lowest energy of an electron (in electron volts, or energy divided by electron charge) in the conduction band of the semiconductor as a function of position in the npn transistor. The valence band labeled VB shows the highest energy for electrons in the semiconductor valence band. These two energy levels are separated by the semiconductor energy gap, a region of forbidden energy for an electron. The CB and VB vary in position within the transistor for two reasons: variations in doping levels going from n- to p- to n-type layers, and also variations in electrical potential through the structure.

The base-emitter junction is forward biased, that is, the base is made positive with respect to the emitter, attracting electrons. This forward bias VBE reduces the barrier φn that opposes entry of electrons into the base. Because the barrier is smaller, electrons enter the base, raising the concentration of electrons in the base above the normal equilibrium level and setting up a concentration gradient of electron density across the base. That gradient drives a diffusion current of electrons across the base (transport according to Fick's law of diffusion), toward the collector. At the same time, the collector is reverse biased by a voltage VCB with respect to the base, that is, made positive with respect to base, so it attracts electrons. This attraction reduces the electron density on the collector side of the base, adding to the gradient in electron density across the field-free portion of the base. The electrons diffusing across the base eventually reach the end of the field-free region, and enter the accelerating electric field created by the reverse bias on the collector. The transport of electrons then switches from diffusion due to the carrier gradient to drift under the action of the electric field.

The strong effect upon the collector current exerted by the base-emitter bias can be understood in terms of its large effect upon the electron density at the base-emitter interface. The number of electrons at the top of the barrier is a factor exp(−φn/Vth) smaller than the density in the emitter itself. Here Vth is the so-called thermal voltage given by:

where kB is the Boltzmann constant and T is the temperature in kelvins. At 290 K, Vth ≈ 25 mV. Thus, a change in this barrier height by an applied bias to become VBE smaller means the electron density at the top of the barrier becomes larger by a factor exp(VBE/Vth), a large exponential increase.

Using the same argument, the backward injection of holes from the base into the emitter also is increased by this same exponential factor. These holes recombine with electrons in the emitter and form a parasitic current consumption that must be supplied by the base current.

The heterojunction bipolar transistor attempts to reduce back injection of holes into the emitter by incorporating a wide bandgap emitter that will increase the barrier φp without increasing φn by changing the alignment of the valence bands of emitter and base without significant alteration of the conduction band alignment. Similarly, narrow bandgap base materials can reduce the electron barrier without reducing the hole barrier by realigning the conduction bands of emitter and base without significant change in the valence band alignment.[3] 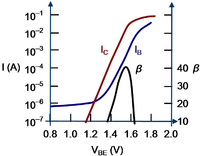 In applications a key parameter is the bipolar current gain, the ratio of DC collector to DC emitter current, usually called the common emitter current gain and denoted by β. In view of the similarity between forward injection of electrons from emitter to base and the backward injection of holes to the emitter, one could be forgiven for expecting not much difference. However, the structure can be designed to greatly favor the injection of forward current over the back-injection of holes. Several factors influence the comparison. First, heavily doping the emitter and lightly doping the base will increase the electron density at the barrier φn compared to the hole density at φp. Also, increasing the gradient of carrier density in the base will increase the electron diffusion current, suggesting a narrow base favors forward injection. (A narrow base increases the gradient by bringing the high electron density near the emitter nearer the low density next to the collector.) Likewise, a lower gradient of hole density in the emitter will tend to suppress backward injection. Unlike the base, where a reverse biased collector insures a low carrier density at the far side of the base, in the emitter this function is served by the recombination of holes at the interface with the metal or polysilicon contact to the emitter. The polysilicon contact is found to be advantageous because the hole current in polysilicon is reduced compared to silicon, not because the gradient of the hole concentration is affected, but because much less current flows in polysilicon than in crystalline silicon for the same gradient.

The figure shows a Gummel plot for one bipolar transistor.[5] It is a logarithmic plot of collector and base currents vs. base-emitter voltage, ideally two straight lines separated by a factor of the current gain β. This plot is useful for showing the range of bias over which the currents follow this exponential dependence upon base-emitter voltage, the center of this plot, and the onset of non-ideal behavior at high and low current levels. It also allows the current level dependence of the current gain to be assessed. 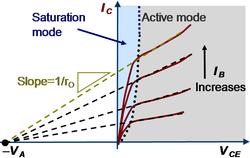 In analog applications such as current mirrors or active loads, it is important for the transistor to have a large output resistance. Such circuits emulate a current source or current sink, and the Norton resistance of such a circuit should be large for ideal behavior.

The output resistance, usually denoted by rO, is a measure of how much collector-base voltage change is necessary to cause a given change in transistor output current when the transistor is in active mode. The reason a change in VCB changes the current is that the width of the neutral base region, where the current is governed by the gradient in carrier density, is narrowed when the CB junction becomes more reverse biased. Therefore the gradient of the carrier density , which is the difference between the high density near the emitter and the low density near the collector divided by the neutral base width, is increased with increased reverse bias of the CB junction. This phenomenon is called either base-width modulation or the Early effect.[6] According to a simple empirical model (see the figure), the output resistance is given by:

where VA is called the Early voltage, and is a parameter entering most models of the transistor. The current IC(IB, VCE) is the collector current evaluated at the selected base current and the selected voltage VCE. The voltage VCE is used instead of VCB because the output resistance is connected between the collector and the emitter in the hybrid-pi model (discussed in the section on frequency dependence below), which is convenient but physically unmotivated. Inasmuch as VBE is relatively small and does not change much, the difference between the CB voltage and the CE voltage in this definition is a minor point.

The figure shows the slope of the output current as 1/rO, and indicates how it increases (how rO decreases, as suggested by the formula) as the collector current increases.

A simplified model for the DC current-voltage relations for the bipolar in active mode including the Early effect is then:[7]

where β0 is the value of β extrapolated to VCE=0, Vth is the thermal voltage already mentioned, and IS is a parameter that varies from device to device called the saturation current. The base current expression is the simple diode law for the EB junction. 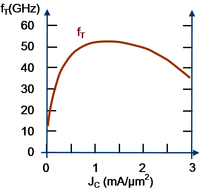 Another important device quality is its speed of response to transient signals. The bipolar transistor is a very non-linear device, so its transient response for large signals requires a numerical calculation. However, some idea is gained using a small-signal model and treating the device for small variations about a quiescent condition (its Q-point). Such a circuit is shown in the figure for a device biased in active mode, the hybrid-pi model. This circuit reduces the problem of frequency response to the RC time-constants related to charge and discharge of various capacitances through their associated resistors.

To boil down the frequency response to a single number (admittedly a limited summary of merit) the so-called transition frequency, denoted fT or ft, is used. This frequency is found by examination of the short-circuit current gain of the transistor, which can be estimated using the hybrid-pi model in common-emitter configuration. With a small-signal current applied to the base and the collector short-circuited to the emitter, which is grounded, the current flowing into the transistor through the collector is:

while the signal current is related to the input voltage vπ by:

The current gain is accordingly:

If we invoke the relation:

with Vth the thermal voltage and IC, IB the DC bias collector and base currents, then:

which, of course, provides the zero-frequency current gain of the transistor as β. However, as frequency increases the current gain drops once the corner frequency is passed, f > fC:

The transition frequency denoted fT is defined as the frequency where the current gain rolls off to a value of unity:

In active mode, capacitance Cμ is the depletion capacitance of the CB junction, which is a lightly doped junction with a large depletion layer width. Thus, this capacitance is small, say 2 pF. On the other hand, Cπ includes the heavily doped EB junction capacitance and the very large diffusion capacitance due to the injected electrons, and is typically several hundred pF. That is the justification for the rather cavalier brushing aside of the frequency dependence in the numerator, jωCμrπ. The frequency dependence in the denominator depending upon Cπrπ will dominate any effect of the numerator introduced by Cμrπ.