Vipera berus is a venomous viper species that is extremely widespread and can be found throughout most of Western Europe and Great Britain and all the way to Far East Asia.[1] Three subspecies are recognized, including the typical form described here.[5]

The body is relatively short and thick-set, with the males are usually shorter and slimmer than the females. Adults grow to 60 cm in length with an average of 55 cm. Maximum size varies per region. The largest -- over 90 cm -- are found in Sweden; specimens of 104 cm have been observed there on two occasions. In France and Great Britain, the maximum size is 80-87 cm.[2] It would seem likely that largest sizes mentioned were indeed attained by female specimens, but this is not mentioned specifically in the literature.

The head is distinct, the sides of which are almost flat and vertical. The edge of the the snout is usually raised into a low ridge. Seen from above, the rostral scale is not visible, or only just. Immediately behind the rostral, there are 2 (rarely 1) small scales. Dorsally, there are usually 5 large plates: a squarish frontal (longer than wide, sometimes rectangular), 2 parietals (sometimes with a tiny scale between the frontal and the parietals), and 2 long and narrow supraoculars. The latter are large and distinct, each separated from the frontal by 1-4 small scales. The nostril is situated in a shallow depression within a large nasal scale. The eye is relatively large -- equal in size or slightly larger than the nasal scale -- but often smaller in females. Below the supraoculars there are 6-13 (usually 8-10) small circumorbital scales. The temporal scales are smooth (rarely weakly keeled). There are 10-12 sublabials and 6-10 (usually 8-9) supralabials. Of the latter, the numbers 3 and 4 are the largest, while 4 and 5 (rarely 3 and 4) are separated from the eye by a single row of small scales (sometimes 2 rows in alpine specimens).[2] 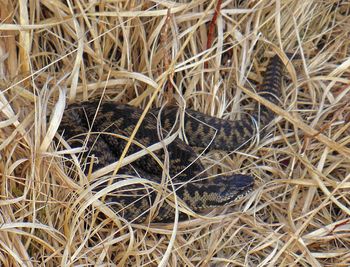 The color pattern varies, ranging from very light-colored specimens with small incomplete dark dorsal crossbars to melanistic individuals that are entirely dark and lack any apparent dorsal pattern. However, most have some kind of zigzig dorsal pattern down the entire length of the body and tail. The head usually has a distinctive dark V or X on the back. A dark streak runs from the eye to the neck and continues as a longitudinal series of spots along the flanks.[2]

This species is listed as protected (Appendix III) under the Berne Convention (Convention on the Conservation of European Wildlife and Natural Habitats).[8]

Sufficient habitat complexity is a crucial requirement for the presence of this species, in order to support their various behaviors -- basking, foraging and hibernation -- as well as to offer some protection from predators and human harassment.[2] It is found in variety of habitats, including: chalky downs, rocky hillsides, moors, sandy heaths, meadows, rough commons, edges of woods, sunny glades and clearings, bushy slopes and hedgerows, dumps, coastal dunes and stone quarries. If dry ground is locally available, they will not avoid wetlands. Therefore, they may be found on the banks of streams, lakes and ponds.[9]

In much of southern Europe, such as southern France and northern Italy, it is found in either low lying wetlands or at high altitudes. In the Swiss Alps, it may ascend to about 3000 m. In Hungary and Russia, it avoids open steppeland; a habitat in which V. ursinii is more likely to occur. In Russia, however, it does occur in the forest steppe zone.[9]

This is mainly a diurnal species, especially in the north of its range. Further south it is said to be active in the evening, and it may even be active at night during the summer months. It is predominantly a terrestrial species, although it has been known climb up banks and into low bushes in order to bask or search for prey.[9]

Generally speaking, this is not an aggressive species, tending to be rather timid and biting only when cornered or alarmed. Many people are only bitten after stepping on them. They will usually disappear into the undergrowth at a hint of any danger, but will return once all is quiet, often to the same spot. Occasionally, individuals will reveal their presence with a loud and sustained hissing, hoping to warn off potential aggressors. Often, these turn out to be pregnant females. When threatened, the front part of the body is drawn into a S-shape to prepare for a strike.[9]

This is a cold-adapted species that hibernates in the winter. In Great Britain, males and females hibernate for about 150 and 180 days respectively. However, in northern Sweden hibernation lasts 8-9 months. On mild winter days, they may emerge to bask where the snow has melted and will often travel across snow. Nevertheless, about 15% of adults and 30-40% of juveniles die during hibernation.[2]

Diet consists mainly of small mammals, such as mice, voles and shrews, as well as lizards. Sometimes, slow worms are taken, and even weasels and moles. They feed on amphibians, such as frogs newts and salamanders. Birds are also reported to be on the menu, especially nestlings and even eggs, for which they they will climb into shrubbery and bushes. Generally, diet varies depending on locality.[9]

Juveniles will eat nestling mammals, small lizards and frogs, as well as insects, worms and spiders. Once they reach about 30 cm in length, their diet begins to resemble that of the adults.[2]

In Hungary, mating takes place in the last week of April, while in the north it happens later in the second week of May. Matings have also been observed in June and even early October, but it is not known if the autumn matings result in any young.[2] Females often breed once every two years,[9] or even once every three years if the seasons are short and the climate is severe.[2]

Males find females by following their scent trails, sometimes tracking them for hundreds of meters a day. If a female is found and flees, the male follows. Courtship involves side-by-side parallel "flowing" behavior, tongue flicking along the back and excited lashing of the tail. Pairs stay together for one or two days after mating. Males chase away their rivals and engage in combat. Often, this also starts with the aforementioned flowing behavior before culminating in the dramatic "adder dance."[2] In this act, the males confront each other, raise up the front part of the body vertically, make swaying movements and attempt to push each other to the ground. This is repeated until one of the two becomes exhausted and crawls off to find another mate. Interestingly, Appleby (1971) notes that he has never seen an intruder win one of these contests, as if the frustrated defender is so aroused by courtship that he refuses to loose his chance to mate. There are no records of any biting taking place during these bouts.[9]

Females usually give birth in August-September, but sometimes as early as July, or as late as early October. Litters range in size from 3 to 20. The young are usually born encased in a transparent sac from which they must free themselves. Sometimes, they succeed in freeing themselves from this membrane while still inside the female. The neonates, measuring 14 to 23 cm (average of 17 cm), are born with a fully functional venom apparatus and a reserve supply of yolk within their bodies. They shed their skins for the first time within a day or two. Females do not appear to take much interest in their offspring, but the young have been observed to remain near their mothers for several days after birth.[9]

Because of the rapid rate of human expansion throughout the range of this species, bites are relatively common. Domestic animals and livestock are frequent victims. In Great Britain, most instances occur in March-October. In Sweden, there are about 1,300 bites a year, with an estimated 12% that require hospitalization.[2]

Relatively speaking, bites from this species are not highly dangerous.[2] There have been only 14 known fatalities since 1876; the last a 5 year old child in 1975. Even so, professional medical help should always be contacted as soon as possible after any bite. Very occasionally bites can be life threatening, particularly in small children, while adults may experience discomfort and disability long after the bite.[11] The length of recovery varies, but may take up to a year.[2]

Local symptoms include immediate and intense pain, followed after a few minutes (but perhaps by as much as 30 minutes) by swelling and a tingling sensation. Blisters containing blood are not common. The pain may spread within a few hours, along with tenderness and inflammation. Reddish lymphangitic lines and bruising may appear, and the whole limb can become swollen and bruised within 24 hours. Swelling may also spread to the trunk, and with children, throughout the entire body. Necrosis and intracompartmental syndromes are very rare.[11]

Systemic symptoms resulting from anaphylaxis can be dramatic. These may appear within 5 minutes post bite, or can be delayed for many hours. Such symptoms include nausea, retching and vomiting, abdominal colic and diarrhoea, incontinence of urine and faeces, sweating, fever, vasoconstriction, tachycardia, lightheadedness, loss of consciousness, shock, angioedema of the face, lips, gums, tongue, throat and epiglotis, urticaria and bronchospam. If left untreated, these symptoms may persist or fluctuate for up to 48 hours.[11] In severe cases, cardiovascular failure may occur.[2]

At least eight different antivenins are available against bites from this species.[12]

The subspecies V. b. bosniensis and V. b. sachalinensis have been regarded as full species in some recent publications.[2]