(PD) Image: John R. Brews
The amplitude of a musical note varies in time according to its sound envelope.[1]

A musical tone is the sound produced by a musical instrument playing a particular musical note. Tone is an objective (measurable) physical property of a note produced in a particular fashion. The differences in tone between musical instruments can be analyzed using Fourier series to identify the frequencies comprising the tone.[2]

The frequency spectrum of a musical instrument playing a particular note varies with the instrument and with the way that it is played. The manner of playing determines the sound envelope of a note, and therefore the amplitude of its constituent frequencies.[1] The spectrum is altered somewhat by the sound envelope, so the musician has some control over the tone.

Some instruments (like the flute or the violin) exhibit a fundamental frequency and multiples of that frequency called harmonics or overtones, all of various amplitudes and phases, and others (like the cymbal or the ratchet) do not.[2][3][4] These ideas find application in the construction of music synthesizers and musical instruments of all kinds.

The perception of a tone involves the subjective attributes called pitch and timbre, and listening to multiple tones can result in perception of either a chord, or a single note. These topics are pursued further below.

Hermann Ludwig F. von Helmholtz developed a theory for the perception of musical sounds.[5] However, apart from his ideas about perception, which involve conjectures about how the ear operates, Helmholtz commented upon the production of sound by musical instruments.

To understand Helmholtz' comments below, some vocabulary is needed: A single note is often referred to as a tone, the lowest frequency present as the fundamental or prime partial tone and harmonics (multiples) of this frequency that appear when a note is played on an instrument as harmonic upper partial tones or upper tones or upper partials. Where only one frequency is present, as with a tuning fork, it is called a simple tone or, sometimes, a pure tone. Where multiple frequencies are present, it is called a compound tone. So, a tone may be a pure tone or a compound tone.[5]

These words identify the organ as a form of mechanical rather than electronic music synthesizer. They also lay out the characterization of a musical note by its constituent frequency components, in the same way that a Fourier series expresses a periodic waveform in terms of its harmonic components. 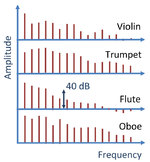 As the remarks of Helmholtz suggest, the sound of a note played upon each instrument is characterized by not only its fundamental tone or frequency, which is the same for all instruments, but by the higher partial tones or harmonics in the note, which are different in amplitude and in phase for each instrument, making them sound different. The figure shows the partial tones making up a tone in four instruments playing the same musical note. In addition to these partial tones, the spectrum contains a wide-band background of frequencies, not shown.

A musical note is a periodic function in time and in space, modulated by a sound envelope. That is, the note can be expressed in one spatial dimension as:

where s is the sound envelope that expresses the duration of the note at a fixed location or its extent in space at a fixed time, and f is a periodic function of its argument:

with λ the wavelength of f and T = λ/v the period of f and v the speed of propagation of f through space.

The periodic factor in such a wave can be analyzed using a Fourier series to show it is made up of a summation of sinusoidal waves, each with their own frequency. These frequency components are useful in distinguishing the different characteristics of the same note played upon different instruments, as shown approximately in the figure.

A laboratory determination of pitch is made by a subject listening to a tone from a musical instrument and to a simple tone, such as that produced by a tuning fork, and identifying circumstances where the instrument and the simple tone sound alike.[6] As a result, pitch is not a purely objective physical property; it is a subjective psychoacoustical attribute of a sound.

Naturally, besides the tone produced by the instrument, the musical experience also depends upon how the tone is modified by the auditorium where it propagates, and how the ear responds to the tone.[7] These effects that relate to the propagation and the perception of a sound are separate from the production of sound by the instrument. The perceived quality of a tone is referred to as timbre. The American National Standards Institute definition of timbre describes it as "that attribute of auditory sensation in terms of which a listener can judge that two sounds similarly presented and having the same loudness and pitch are dissimilar", and a note to this definition adds that "timbre depends primarily upon the spectrum of the stimulus, but it also depends upon the waveform, the sound pressure, the frequency location of the spectrum, and the temporal characteristics of the stimulus" [8]

As a musical tone consists of a fundamental tone and higher partial tones, one might ask how this differs from a chord, that is, several tones played simultaneously. This question is fundamentally one of perception: for example, how is it that a note played on a musical instrument is heard with a particular timbre, while several notes sound not like a single note played upon a different instrument (a note with a single timbre), but like a chord (a combination of notes, each with their own timbre)?

The perceptions of chord and timbre are complex. Partly, the differences have to do with the reaction of the ear to loudness of the constituent frequencies, and the fusion of separate harmonics into a single whole is disturbed when some component frequencies gain an intensity comparable to the fundamental, resulting in the perception of a chord.[9][10] The differences also involve how the ear responds to the way the sounds evolve in time; commonality in time-variation of harmonics tends to be heard as the fusing of the harmonics into the timbre of one tone.[11]