In thermal power plants, the primary purpose of a surface condenser is to condense the exhaust steam from a steam turbine at as low a pressure as possible and to obtain pure water (referred to as steam condensate) so that it may be reused in the steam generator or boiler as boiler feed water.

The steam turbine itself is a device to convert the heat in steam to mechanical work. The difference between the enthalpy of the inlet steam to a turbine and the enthalpy of the exhaust steam represents the heat which is converted to mechanical work. Therefore, the larger the enthalpy difference between inlet steam and exhaust steam, the higher is the amount of work delivered by the turbine. Condensing the exhaust steam of a turbine at a pressure below atmospheric pressure, increases that enthalpy difference and therefore increases the work output of turbine. The water-cooled surface condensers used on the steam turbine exhausts in large power plants usually operate at an absolute pressure of about 35 to 40 mmHg which is far below the typical atmospheric pressure of 760 mmHg.

Most of the heat liberated by condensing the exhaust steam is transferred to and carried away by the cooling medium (water or air) used by the surface condenser. 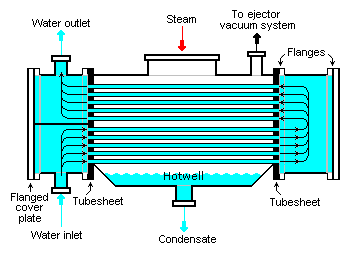 The adjacent diagram depicts a typical water-cooled surface condenser as used in power stations to condense the exhaust steam from a steam turbine driving an electrical generator.[2][3][5][6] There are many fabrication design variations depending on the manufacturer, the size of the steam turbine, and other site-specific conditions.

The shell is the condenser's outermost body and contains the heat exchanger tubes. The shell is fabricated from carbon steel plates and is stiffened as needed to provide rigidity for the shell. When required by the selected design, intermediate plates are installed to serve as baffle plates that provide the desired flow path of the condensing steam. The plates also provide support that help prevent sagging of long tube lengths.

At the bottom of the shell, where the condensate collects, an outlet is installed. In some designs, a sump (often referred to as the hotwell) is provided. Condensate is pumped from the outlet or the hotwell for reuse as boiler feedwater.

For most water-cooled surface condensers, the shell is under vacuum during normal operating conditions. 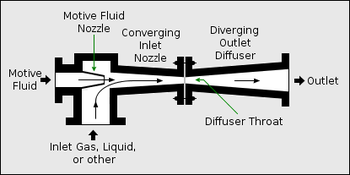 (CC) Image: Milton Beychok
Schematic diagram of a typical injector or ejector. For a steam-jet ejector, the motive fluid is steam.

The Venturi effect, which is a particular case of Bernoulli's equation, applies to the operation of steam-jet ejectors.

At each end of the shell, a steel sheet of sufficient thickness is provided, with holes for the exchanger tubes to be inserted. The inlet end of each tube is also bellmouthed for streamlined entry of water. This is to avoid eddies at the tube inlets giving rise to erosion, and to reduce flow friction. To take care of length-wise expansion of the tubes, some designs may have expansion joints (pleated steel bellows) between the shell and the tube sheets allowing the latter to move longitudinally.

Generally the tubes are made of stainless steel, copper alloys such as brass or bronze, cupro nickel, or titanium depending on various criteria. The tube lengths range up to about 55 ft (17 m) for modern power plants, depending on the size of the condenser. The outer diameter of the condenser tubes typically ranges from 3/4 inch (19 mm) to 1-1/4 inch (32 mm), based on condenser cooling water friction considerations and overall condenser size.

Each end of the condenser shell is closed by a box cover referred to as a waterbox, connected to the tube sheet or condenser shell by a flange. The waterbox is usually provided with manholes on hinged covers to allow periodic inspection and cleaning.

Other applications of surface condensers