Like any theory, special relativity has been subject to experimental test, and agrees with observations to the accuracy attainable up to the present. Some aspects of the theory are not directly measurable, so its validity is based upon those predictions that can be checked. For example, the Michelson-Morely experiment measures the two-way speed of light, not the one-way speed of light.[2] Some other properties of the speed of light in vacuum that are supported by experiment to date are: propagation is the same in all directions (isotropy); independent of polarization (no dichroism); independent of field strength (magnitude of the associated electric and magnetic fields); and independent of the frequency (color) of the light (no dispersion).

No theory to date can predict the speed of light from other considerations. 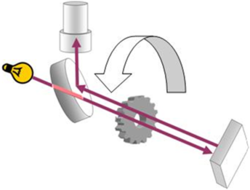 (PD) Image: John R. Brews
The Fizeau apparatus for measuring the speed of light by passing it between the teeth of a rotating cog and reflecting it back through adjacent teeth. 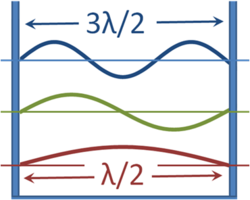 (PD) Image: John R. Brews
The wavelengths of standing waves in a box that have zero amplitude (nodes) at the walls.

Galileo Galilei suspected that light has a finite velocity and claimed that he tried in vain to measure it. About forty years later, in 1675, the Danish atronomer Rømer estimated that it takes about 11 minutes (660 seconds) for light to travel from the Sun to the Earth. He could make this estimate by observing eclipses of the first satellite of the planet Jupiter. A few years earlier Cassini had deduced from observations of Mars that the distance from Sun to Earth was about 139⋅106 km, so that the speed of light was estimated to be 2.1⋅108 m/s, which is about 30% lower than the modern value. Later Rømer's value was refined, by similar astronomical observations, to 499 seconds. In 1849 Fizeau determined by Earth-bound experiments that c is 3.15⋅108 m/s.

Modern work brought this value down to just under 3⋅108 m/s. In particular, measurements of the resonant frequencies of cavities with dimensions a known number of wavelengths, and the relation c=λf relating wavelength and frequency to the speed of light resulted in c = 299,792.5±3 km/s in 1950.[3] As shown in the figure, the wavelength of waves in a box that are forced to have zero amplitude at the walls can have only values that are multiples of a half-wavelength. For microwaves, zero amplitude at the walls results because the electromagnetic fields associated with the wave cannot penetrate a metal wall, so the light intensity inside the wall is zero. Naturally, such walls are an idealization and real walls will permit some slight penetration (for example, the skin effect).

In any event, with the imposition of a condition for nodes at the walls, allowed wavelengths can adopt only restricted values. Because wavelength λ (determining the spatial behavior) and frequency f (determining the time dependence of the wave) are related to the speed c (at which the wave would propagate if it were free, and not in a box) as λ=c/f, the frequencies also have only discrete values. By choosing the wavelength by specifying the dimensions of the box, and by measuring the associated frequency, a value for c=λf is found.

A brief history of later developments is found in Sullivan.[4]

Relation to the metre

See also the discussion at metre.

The universality of speed of light in vacuum, and its propagation being independent of complications like dichroism, anisotropy, dispersion and nonlinearity meant that all observers readily could measure lengths using the transit time of light. In 1975 the 15th CGPM (Conférence Générale des Poids et Mesures, General Conference on Weights and Measures)[5] recommended a defined speed of light in the SI system of units:

The numerical value for c in principle could be chosen to be any numerical value whatsoever, because a change in the defined value of c corresponds simply to a different choice for the time-of-flight 1/c to traverse the metre, and thus traversal of a different length, and thus a standard metre of different length. The length of the standard metre, of course, is an arbitrary unit selected by international convention,[7] and likewise for the choice for the standard time-of-flight 1/c.

A few years later[8] this suggestion was adopted, and the metre was redefined as the length of the path traveled by light in vacuum during a time interval of 1/c of a second, and the notation c0 suggested for the defined value of the speed of light in vacuum.[9][10] The value for c0 was selected to correspond well with the measured speed of light using the then standard metre defined in terms of a wavelength of krypton-86 radiation. That choice was made to limit any dislocation in switching to the new international standard of length. Reference was made to commonly employed methods and corrections to insure measured transit times in real media could be adjusted to refer to classical vacuum.[11]

In 1968, the second was defined as the duration of 9 192 631 770 periods of the radiation corresponding to the transition between the two hyperfine levels of the ground state of the caesium-133 atom.[12] Greater precision in time determinations became possible with the development of microwave and laser optics, allowing extension of time measurements to higher frequency transitions in the optical regime.[13]

“Note that consequently the speed of light is and remains precisely 299 792 458 meters per second; improvements in experimental accuracy will modify the meter relative to atomic wavelengths, but not the value of the speed of light!”

To this remark it may be added that the defined speed of light c0 has by virtue of its definition the properties of isotropy, no dichroism, no dependence upon field strength, and no dispersion, regardless of what experiment may discover about, for instance, the propagation of light in some real medium approximating ideal vacuum, for instance, propagation in outer space or in good terrestrial vacuum. A discovery of anisotropy in terrestrial vacuum, as an example hypothetical situation, would not change c0, but would instead lead to a specification by the CGPM that the measurement must be corrected for anisotropy to refer terrestrial vacuum to the reference medium classical vacuum, or (perhaps) that the standard metre had to be measured in a particular standard direction when using terrestrial vacuum.

Other systems of units

In systems of units where lengths are not derived units based upon times of transit, but are independent units (for example, wavelengths of light at a chosen frequency), improvements in measurements of length or time lead to more accurate determination of the speed of light. However, it may be noted that the comparison of lengths even in such units can be made by comparing the transit time of light along the lengths. Such time-of-flight methodology may or may not be more accurate than the determination of a length as a multiple of the fundamental length unit.