A personal computer (PC) is a computer whose price, size, and features make it suitable for personal use. Personal computers are intended for use by one user, as compared with servers. A personal computer, for example, will typically include the ability to play music and display graphics quickly. A server, on the other hand, is intended to be accessed by many users at once over a network; it is unlikely to include sound or fancy display capability, but instead may be configured with additional memory or network connections and a faster processor.

The term personal computer entered common use when small, personally affordable computers became available in the late 1970s. The original PCs were made by Apple Computer with their Apple I and II, Tandy Radio Shack with the TRS-80, and Commodore International with the Commodore PET and Commodore 64. Building on the success of these earlier efforts, IBM in 1983 introduced the IBM PC. This development prompted aspiring computer manufacturers such as Compaq to legally reverse engineer the IBM BIOS (the only hardware on the original PC that was proprietary), thus spawning an entire industry devoted to manufacturing "clones." Clones (more technically IBM compatible PCs) were capable of running the same Disk Operating System as the original IBM PC but on hardware components manufactured by other companies besides IBM.

Personal computers tend to be operated by one user at a time to perform word processing, internet browsing, faxing, e-mail and other digital messaging, multimedia playback, video game play, computer programming, etc. This is in contrast to most other consumer electronics, which tend to specialize in only a few functions, but tend to outperform general purpose PCs at those tasks. As a result, a video game console (for example) can generally play video games better than an equally-priced computer, but can't do any of a PC's other functions.

The user of a modern personal computer may have significant knowledge of the operating environment and application programs, but is not necessarily interested in or capable of programming for the computer. Therefore, most software written primarily for personal computers tends to be designed with simplicity of use, or " user-friendliness" in mind. However, the software industry continuously provides a wide range of new products for use in personal computers, targeted at both the expert and the non-expert user.

Personal computers are generally divided into categories based on their size, portability, and capabilities.

Portable computers are designed for portability, and so are lighter than desktops. They tend to be slightly more expensive than similarly equipped desktops, due to space and heat constraints. Most portable computers contain batteries so that they can be used for short periods without access to an electrical outlet. 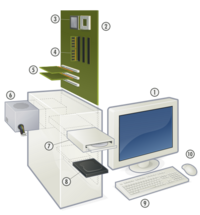 An exploded view of a modern personal computer:

Most personal computers are standardized to the point that purchased software is expected to run with little or no customization for the particular computer. Many PCs are also user-upgradable, especially desktop and workstation class computers. Devices such as main memory, mass storage, even the motherboard and central processing unit may be easily replaced by an end user. This upgradeability is, however, not indefinite due to rapid changes in the personal computer industry. A PC that was considered top-of-the-line five or six years prior may be impractical to upgrade due to changes in industry standards. Such a computer usually must be totally replaced once it is no longer suitable for its purpose.

The motherboard (or mainboard) is the primary circuit board for a personal computer. Many other components connect directly or indirectly to the motherboard. Motherboards usually contain one or more CPUs, supporting circuitry and ICs for CPU operation, main memory, and facilities for initial setup of the computer immediately after being powered on. Boot firmware or a BIOS is often held in a small piece of non-volatile memory, such as Flash memory.

Additionally, it contains connectors for hard drives and optical or floppy drives. In many portable and embedded personal computers, the motherboard houses nearly all of the PC's core components. Often a motherboard will also contain one or more peripheral buses and physical connectors for expansion purposes. Some higher-end motherboards have a secondary daughter board attached to provide further expandability or to satisfy space constraints.

In laptops, the motherboard may be sufficiently "all-in-one" that almost any repair may need it to be replaced, which, if the computer is a year or so old, may not be economic. It can be frustrating when the problem is no more than an external power connector at the edge of the motherboard, which lines up with the external jack on the case into which the external power supply/battery charger, which breaks loose due to power connector stresses. An occasional highly skilled technician sometimes can solder it back in place, but that is not the factory recommended technique.

The central processing unit, or CPU, is the part of the computer that executes operations. Computer software programs, including the operating system, consists of millions of processor instructions encoded in binary. Nearly all PCs contain a type of CPU known as a microprocessor. The microprocessor often plugs into the motherboard using one of many different types of sockets. IBM compatible PC computers use an x86-compatible processor. Intel makes most of the processors in personal computers, with AMD being it's closest competitor. Via and Transmeta also make x86 processors. Other types of computers might use Power PC, SPARC or other types of CPUs, however nearly all computers sold to home users use x86 processors.

A PC's main memory place (or primary storage) is fast storage space that is directly accessible by the CPU, used to store the currently executing program and immediate data. PCs use semiconductor random access memory such as SDRAM as their primary storage. Main memory is usually much faster than mass storage devices like hard disks or optical discs, but cannot retain data without power and is more expensive than mass storage. Therefore, it is not generally suitable for long-term or archival data storage.

Mass storage stores programs and data without consuming power. Although semiconductor flash memory has dropped in cost, the prevailing form of mass storage in personal computers is still the electromechanical hard disk.

A computer's hard disk stores most of the user's data, including their operating system, applications, media, and documents. On a Microsoft Windows computer, this is represented by the "C:" drive.

If the mass storage controller (often on the motherboard) provides for expandability, a PC may also be upgraded by the addition of extra hard disks or removable storage drives. Standard internal storage device interfaces are ATA and Serial ATA, with SATA being the faster of the two. Other types of internal storage device interfaces include SCSI and CF+ Type II. A hard drive usually takes up a 3.5 inch or 2.5 inch bay inside a computer.

The graphics processing unit (GPU) is responsible for handling the graphics output of the computer, usually to a monitor. A GPU contains a special-purpose processor and its own memory. GPUs usually handle one or two outputs, often in forms like VGA, DVI, and S-Video. In some computers, GPUs can also handle other functions, such as video decoding.

The sound card is responsible for the input and output of computer audio. A PC sound card generally has at least two (Line-In/Line-Out) stereo ports. Like the GPU and ethernet card, the sound card can be both dedicated or integrated.

The power supply is needed to deliver the electricity to each of the components of the PC, either individually or through the motherboard. It converts AC power to a few different voltages of DC power. Each different voltage line is sometimes referred to as a "rail". The consumption of the components and the output of the power supply is limited by the current on each rail. In order for the PC to perform at its peak, the output of the power supply on each rail must be greater than or equal to the sum of the maximum consumptions of the components using that rail. Usually, the limiting rail is the +12V rail because this feeds the CPU, the GPU, and the drives.