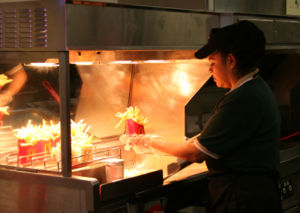 Production of french fries in McDonald's

McDonald's is the world's largest chain of fast food restaurants. A multinational corporation headquartered in Oak Brook, Illinois, it began as a modest hamburger restaurant at a single location in San Bernardino, California, run by two brothers, Maurice (Mac) and Richard (Dick) MacDonald. Ray Kroc, a travelling salesman for milkshake machines, was impressed by their highly organized operation during a visit in the 1950s, and hoped that by expanding their operations he would be able to place more of his mixers. Kroc and the McDonalds became partners and began to open new restaurants; the first franchised McDonald's was opened by Kroc himself in Des Plaines, Illinois, on April 1955. After that, the business expanded rapidly and Kroc bought out the McDonald brothers' share in 1961 for $2.7 million, well on his way to becoming a billionaire. Today, McDonald's is still best known for its hamburgers and french fries but also sells many other food items.

By 1985 McDonald's was selling 5 billion burgers a year (and stopped updating the count on its distinctive yellow arches.) Over 31,000 McDonald outlets operate in 118 countries, with slightly different menus according to local tastes.[1] The local franchiser, who spent millions to buy the outlet, has little control over the menu, and must purchase supplies from the corporation, and pay it a royalty fee as a percent of sales.

By 2008 sales reached $22 billion a year, with most corporate profits coming from overseas units. Revenue to the central corporation grew 3% in the U.S. to $1.9 billion in the first three months of 2008 (plus much more to local franchisers), while profit climbed 5% to $682.5 million. European revenue climbed 23% to nearly $2.4 billion while, quarterly revenue in Asia, the Middle East and Africa grew 24% to about $1 billion. McDonald's owns most of its overseas outlets, but franchisers own most of the American outlets, and the corporation only counts the revenue it receives from franchisers. Total sales are therefore much higher than $8 billion in the U.S.

The standardized McDonald's hamburger has meat that weighs 1.6 ounces (45 grams) and measures 3 and 5/8 inches (9.2cm) across; and is garnished with a quarter of an ounce of chopped onion, a teaspoon of mustard, a tablespoon of ketchup and a pickle slice one inch in diameter. The Big Mac is likewise standardized with two patties and a sauce.

Its closest competitor is Burger King, which, while it has a set of basic products, counters McDonald's standardization by encouraging the customer to customize sandwiches with different condiments.

Ritzer (2000) argues that McDonald's has succeeded so well because it offers consumers, workers, and managers a maximum degree of efficiency, calculability, predictability, and control through non-human technology. These factors comprise a rational system, as first proposed by the German sociologist Max Weber. As with Weber's "iron cage of rationality," there is also a negative side to McDonaldization. Ritzer labels this "the irrationality of rationality", meaning that a rational system can produce a hail of irrational effects, from environmental damage to dehumanization of the workplace.[2] East Asian patrons often transform their neighborhood McDonald's into a local institution similar to a leisure center or a youth club.[3]

Apart from selling fast food, McDonald's is also well known for various controversial claims made by both the company and its critics. For example, the company was singled out by film-maker Morgan Spurlock in his documentary film Supersize Me for selling unhealthy products as a complete "meal"; Spurlock's methodology of eating nothing but McDonald's food for 30 days was vigorously criticised by the corporation, and attempts at reduplicating his experiences have produced mixed results. For several years in England the company was also at the center of the "McLibel" legal action, in which two environmental activists were sued by McDonald's for handing out leaflets in front of their restaurants claiming that their food was unacceptably poor, that the company damaged the environment, exploited workers, and pursued various other unethical practices. McDonald's eventually won its case in a London court but in 2005 the trial process was found to have broken human rights legislation by the European Court of Human Rights, which ruled that British libel laws were over-oppressive and that the environmentalists were denied legal aid.