This article is about the Chief Justice of the Supreme Court of the United States. For other uses of the term John Roberts, please see John Roberts (disambiguation). 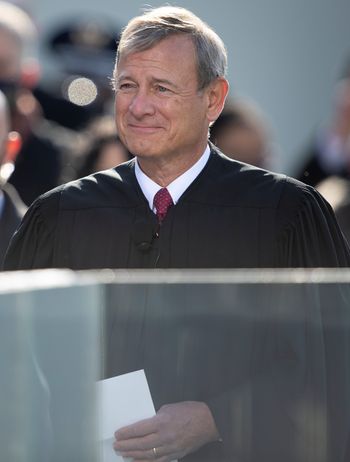 From 1981 to 1986, he served in the Reagan administration, first as Special Assistant to the Attorney General, U.S. Department of Justice (1981-1982), then as Associate Counsel to the President in the White House Counsel’s Office (1982–1986). After four years in private practice in Washington, D.C., he served as Principal Deputy Solicitor General, U.S. Department of Justice from 1989–1993 in the administration of President George H.W. Bush. He then returned to private practice.[4]

In 2000, Roberts traveled to Florida to serve as legal adviser to Governor Jeb Bush concerning the issues surrounding the Florida recount of the 2000 presidential election.[5] According to Jeffrey Toobin, Roberts also advised the legal team of presidential candidate George W. Bush behind the scenes in their successful attempt to stop the recount in Florida.[6]

In 1992, the elder President Bush nominated Roberts to the U.S. Court of Appeals for the District of Columbia Circuit. Bush lost his bid for reelection later that year and Robert's nomination expired when Bush left office in January of 1993, before a Senate vote was held.

Roberts was again nominated for the same court by Bush's son, President George W. Bush, on May 10, 2001. Because the Democrats and Republicans in the Senate were in a conflict over judicial nominees, Democratic chairman of the Senate Judiciary Committee Patrick Leahy refused to give a hearing to Roberts during the 107th Congress. After Republicans won control of the Senate during the 2002 elections, Bush renominated Roberts on January 7, 2003, the first day of the 108th Congress. Roberts was confirmed May 8, 2003.[7]

In view of his relatively short tenure as a Circuit Judge, Roberts was involved in only a few notable cases. Among these, two received considerable media attention. The first was Hedgepeth v. Washington Metropolitan Area Transit Authority, 386 F.3d 1148 which revolved around the arrest of a 12-year old girl at a Washington, D.C. metro station for eating a single french fry in violation of a no eating policy on transit authority premises. The girl's relatives sued, challenging her arrest as unconstitutional under the Fourth and Fifth Amendment. They argued she was the subject of age discrimination because the transit authority requires minors must be arrested and detained for any criminal offense, while adults receive a citation for the same offense. The district court dismissed the case because, it ruled, "there is no fundamental right to be free from physical restraint when there is probable cause for arrest." The D.C. Circuit affirmed the ruling. Roberts, writing the opinion for the court, summed up the case in a passage that caused widespread amusement, something that is unusual for legal opinions:

No one is very happy about the events that led to this litigation. ... The district court described the policies that led to her arrest as ‘‘foolish,’’ and indeed the policies were changed after those responsible endured the sort of publicity reserved for adults who make young girls cry. The question before us, however, is not whether these policies were a bad idea, but whether they violated the Fourth and Fifth Amendments to the Constitution. Like the district court, we conclude that they did not, and accordingly we affirm.[8] 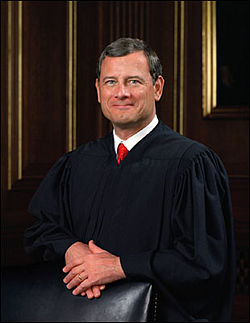 On July 19, 2005, John Roberts was nominated to the U.S. Supreme Court by President George W. Bush to replace Associate Justice Sandra Day O'Connor, who had announced her retirement at the end of the 2004 term. Roberts' nomination would be the first appointment to the Supreme Court since Stephen Breyer joined the court in 1994. While the confirmation hearings in the Senate were still pending, Chief Justice William H. Rehnquist died on September 3, 2005, creating a second vacancy on the Supreme Court. President George W. Bush appointed Roberts to fill the vacant Chief Justice seat, rather than the Associate Justice seat he was originally scheduled to be appointed to.

Responses to Roberts' nomination were overwhelmingly positive. Both Republican and Democratic members of the Gang of 14, a bipartisan group of moderate senators formed to defuse a brewing political battle over judicial nominations, soon announced they did not think Roberts was in any way problematic. Democratic Senator Joseph Lieberman said, "This is a credible nominee and not one that, as far as we know now, has a record that could in any sense be described as extremist."[9] Influential Republicans also approved of Roberts. In an op-ed for the Wall Street Journal, Manuel Miranda, former counsel to Senator Bill Frist, summarized a widely shared sentiment among conservatives: "What a relief. Judge Roberts's writings as a young lawyer show him to be a solid constitutionalist."[10]

Confirmation hearings started September 12, 2005, six days later than originally scheduled due to the death of Rehnquist, and overshadowed in media coverage by the recent flooding of New Orleans by hurricane Katrina. Roberts' judicial and legal record was considered by many to be brilliant and without any realistic possibility of scandal. Despite numerous documents revealing an obviously conservative, or constitutionalist, view of the law and American jurisprudence, his erudition and infectious good-naturedness left little doubt that his confirmation was all but certain. In his opening statement he described his view of a judge as similar to that of an umpire at a baseball game,[11] a comparison that has been criticized as inaccurate, since, unlike umpires, Supreme Court justices make up new rules in the course of their work, but the general image was evocative and appealing to people from all sides of the political spectrum. On the topic of judicial activism, Roberts said that he has respect for the rule of stare decisis, i.e. leaving alone settled precedents, but that precedent can be overturned.

Roberts' performance at the hearings was so impressive that even Democratic Senator Dick Durbin of Illinois, who voted against his confirmation, was reported as having said that Roberts "retired the trophy for best performance by a court nominee."[12][13] In an unusual display of bipartisanship for judicial appointments during the Bush Administration, both the chairman and ranking member of the Senate Judiciary Committee, Arlen Specter (Republican) and Patrick Leahy (Democrat) respectively, supported the nomination. On September 22, 2005 the committee voted 13 to 5 to confirm Roberts, with Senators Joe Biden, Dick Durbin, Dianne Feinstein, Edward Kennedy, and Charles Schumer dissenting. The confirmation vote in the full Senate took place exactly one week later, on September 29. Roberts was confirmed 78-22.[14] After confirmation, the most senior and Acting Chief Justice, John Paul Stevens administered the oath of office at the White House, and Roberts began his term and what is known as the Roberts Court.[12][15]

A conservative and strict constructionist, Roberts is known for writing uncontroversial opinions in his first several terms, then displaying more conservative viewpoints as he has gained more experience.[16]

Roberts suffered a seizure on July 30, 2007 while vacationing in Maine. As a result of the seizure, he fell several feet on a dock near his house. He was taken to a hospital in Rockport, Maine, where he remained for observation overnight. Doctors called the incident a benign idiopathic seizure, that is to say, a seizure without obvious cause. Since the Chief Justice had had a previous seizure in 1993, Roberts is now technically diagnosed as an epilepsy patient, though this term covers many different types of seizure disorders and does not imply a disabling disease.[17]