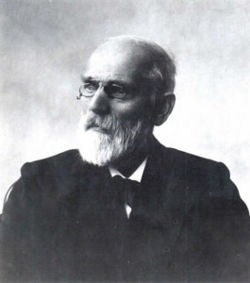 (?) Image: University of Amsterdam Archives
Johannes Diderik van der Waals, most probably around 1910 when he was awarded the Nobel Prize.

Johannes Diderik was the oldest of ten children born to Jacobus van der Waals and Elisabeth van den Berg. His father was a carpenter in the Dutch city of Leiden. As was usual for working class children in the 19th century, he did not go to the kind of secondary school that would have given him the right to enter university. Instead he went to a school of "advanced primary education", which he finished at the age of fifteen. He then became a teacher's apprentice in an elementary school. Between 1856 and 1861 he followed courses and gained the necessary qualifications to become a primary school teacher and head teacher.

In 1862, he began to attend lectures in mathematics, physics and astronomy at the University in his city of birth, although he was not qualified to be enrolled as a regular student. However, the University of Leiden had a provision that enabled outside students to take up to four courses a year. In 1863 the Dutch government started a new kind of secondary school (HBS, a school aiming at the children of the higher middle classes). Van der Waals—at that time head of an elementary school—wanted to become a HBS teacher in mathematics and physics and spent two years studying in his spare time for the required examinations. In 1865, he was appointed as a physics teacher at the HBS in Deventer and in 1866, he received such a position in The Hague, which is close enough to Leiden to allow van der Waals to resume his courses at the University there. Just before moving to Deventer Johannes Diderik married the eighteen-year-old Anna Magdalena Smit, in September 1865.

Van der Waals still lacked the knowledge of the classical languages that would have given him the right to enter university as a regular student and to take examinations. However, it so happened that the law regulating the university entrance was changed and dispensation from the study of classical languages could be given by the minister of education. Van der Waals was given this dispensation and brilliantly passed the qualification exams in physics and mathematics for doctoral studies. At Leiden University, on June 14, 1873, he defended his doctoral thesis Over de Continuiteit van den Gas en Vloeistoftoestand (on the continuity of the gaseous and liquid state). In the thesis, he introduced the concepts of molecular volume and molecular attraction (see the article on the van der Waals equation for the technical background).

Van der Waals had four children, three daughters and one son. His wife died of tuberculosis, 34 years old, in 1881. Van der Waals never remarried and was so shaken by the death of his wife that he did not publish anything for about a decade.

The main interest of van der Waals was in the field of thermodynamics. He was much influenced[1] by Rudolf Clausius' 1857 treatise entitled Über die Art der Bewegung, welche wir Wärme nennen (On the Kind of Motion which we Call Heat).[2] Van der Waals was later greatly influenced by the writings of James Clerk Maxwell, Ludwig Boltzmann, and Willard Gibbs. Clausius' work led him to look for an explanation of Thomas Andrews' experiments that had revealed, in 1869, the existence of critical temperatures in fluids.[3] He managed to give a semi-quantitative description of the phenomena of condensation and critical temperatures in his 1873 thesis.[4] This dissertation represented a hallmark in physics and was immediately recognized as such, e.g. by James Clerk Maxwell who reviewed it in Nature[5] in a laudatory manner.

A second great discovery was published in 1880, when he formulated the Law of Corresponding States. This showed that the van der Waals equation of state can be expressed as a simple function of the critical pressure, critical volume, and critical temperature. This general form is applicable to all substances (see van der Waals equation.) The compound-specific constants a and b in the original equation are replaced by universal (compound-independent) quantities. It was this law which served as a guide during experiments which ultimately led to the liquefaction of hydrogen by James Dewar in 1898 and of helium by Heike Kamerlingh Onnes in 1908.

In 1890, van der Waals published a treatise on the Theory of Binary Solutions in the Archives Néerlandaises. By relating his equation of state with the Second Law of Thermodynamics, in the form first proposed by Willard Gibbs, he was able to arrive at a graphical representation of his mathematical formulations in the form of a surface which he called Ψ (Psi) surface following Gibbs, who used the Greek letter Ψ for the free energy of a system with different phases in equilibrium.

Mention should also be made of van der Waals' theory of capillarity which in its basic form first appeared in 1893[6]. In contrast to the mechanical perspective on the subject provided earlier by Pierre-Simon Laplace[7], van der Waals took a thermodynamic approach. This was controversial at the time, since the existence of molecules and their permanent, rapid motion were not universally accepted before Jean Baptiste Perrin's experimental verification of Albert Einstein's theoretical explanation of Brownian motion.