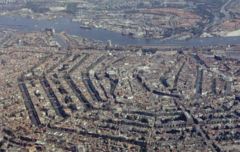 © Photo: The Amsterdam Municipal Department for the Preservation and Restoration of Historic Buildings and Sites
The historical city center. The concentric canals are clearly shown. The water at the top is the IJ.

Amsterdam is the constitutional capital and the largest city of the Netherlands (inhabitants in 2007 ca. 743,100). In 2007 the city housed 175 different nationalities. About 122,000 inhabitants had a double nationality (Dutch and non-Dutch). In 2007 ca. 65,000 inhabitants were Moroccan and 37,000 Turkish.[1] The Amsterdam region has about 2 million inhabitants. This is the region between Alkmaar, Zaanstad and Purmerend to the north, Almere and Diemen to the East, Abcoude, Amstelveen, Hoofddorp to the south, and Haarlem and IJmuiden to the west. Amsterdam is situated mainly on the south bank of the IJ—the IJ being the mouth of the short river Amstel (after which Amsterdam is named) on the IJsselmeer (the former Zuiderzee). Amsterdam is connected with the North Sea by the North Sea Canal (opened in 1876), which accommodates ocean-going vessels. The Amsterdam-Rhine canal (1952) connects Amsterdam with the Rhine river and thus with Nordrhein-Westfalen the largest (in population) and one of the most heavily industrialized Bundesländer (states) of Germany. Schiphol Airport (also known as Amsterdam Airport), a few miles south of Amsterdam in the municipality Haarlemmermeer, is the largest Dutch airport and ranks number 12 in the world with respect to number of passengers.

Because of its soft, wet, and peaty soil the inner city is built on wooden piles and is cut by about 40 concentric and radial canals (in Dutch called grachten) flanked by streets and crossed by some 400 bridges. Thus, Amsterdam is sometimes referred to as Venice of the North. Many of the large picturesque houses along the canals are former patrician dwellings and are now in use as office buildings. The canals with their bridges give Amsterdam an unmistakable character nowhere else to be seen in the world.

In the 13th century a Dam was built in the river Amstel, after which fishermen and tradesmen settled around it. The oldest written referral to the city is in a document of 1275, in which Floris V, count of Holland, gives the burghers of Amsterdam freedom of toll. It is likely—but not without doubt—that Amstelledam, as the city was then called, was chartered in 1306 by the Bishop of Utrecht. Soon after (1369) Amsterdam joined the Hanseatic League and became one of the most important trade centers in Holland. In 1568 the Netherlands rose against the king of Spain, Philip II, who inherited the country from his father, the Habsburg emperor Charles V. Amsterdam did only join the revolutionaries ten years later in 1578.

After the Flemish city Antwerp, that had joined the rebellion, was reconquered by the Spanish, many Flemish tradesmen fled to Amsterdam. They were soon joined by many well-to-do Portuguese Jews (often from Spanish descent), who were expelled from their country. This influx of foreigners caused an economic boom and Amsterdam developed into one of the most important cities of Europe in the middle of the seventeenth century. These were the days that the large patrician houses along the canals were built.

By the mid-1660s Amsterdam had reached the optimum population (about 200,000) for the level of trade, commerce and agriculture then available to support it. The city contributed the largest quota in taxes to the States of Holland which in turn contributed over half the quota to the States General. Amsterdam was also one of the most reliable in settling tax demands and therefore was able to use the threat to withhold such payments to good effect.

Amsterdam was governed by a body of regents, a large, but closed, oligarchy with control over all aspects of the city's life. The regents were a powerful voice in the affairs of Holland as well. Only men with sufficient wealth and a long enough residence within the city could join the ruling class. The first step for an ambitious and wealthy merchant family was to arrange a marriage with a long-established regent family. In the 1670s one such union, that of the Trip family (the Amsterdam branch of the Swedish arms makers) with the son of Burgomaster Valckenier, extended the influence and patronage available to the latter and strengthened his dominance of the council. The oligarchy in Amsterdam thus gained strength from its breadth and openness. In the smaller towns family interest could unite members on policy decisions but contraction through intermarriage could lead to the degeneration of the quality of the members. In Amsterdam the network was so large that members of the same family could be related to opposing factions and pursue widely separated interests. The young men who had risen to positions of authority in the 1670s and 1680s consolidated their hold on office well into the 1690s and even the new century.[2]

Amsterdam's regents provided good services to residents. They spent heavily on the water-ways and other essential infrastructure, as well as municipal almshouses for the elderly, hospitals and churches.

Amsterdam's wealth was generated by its commerce, which was in turn sustained by the judicious encouragement of entrepreneurs whatever their origin. This open door policy has been interpreted as proof of a tolerant ruling class. But toleration was practised for the convenience of the city. Therefore the wealthy Sephardic Jews from Portugal were welcomed and accorded all privileges except those of citizenship, but the poor Ashkenazi Jews from Eastern Europe were far more carefully vetted and those who became dependent on the city were encouraged to move on. Similarly, provision for the housing of Huguenot immigrants was made in 1681 when Louis XIV's religious policy was beginning to drive these Protestants out of France; no encouragement was given to the dispossessed Dutch from the countryside or other towns of Holland. The regents encouraged immigrants to build churches and provided sites or buildings for churches and temples for all but the most radical sects and the native Catholics by the 1670s (although even the Catholics could practise quietly in a chapel within the Beguinhof).

Literacy rose sharply in the city, due to multiple causes including economic specialization, cultural changes in the wake of the Reformation and the Dutch revolt, Calvinist emphasis on Bible reading by lay people, and changes in the composition of the city's rapidly growing population.

After 1660 the economy suffered repeated setbacks, caused the mercantilist trade policy of the neighboring countries and the stagnation of population growth and purchasing power. In addition the national debt had greatly increased because of the military operations against the territorial expansionism of Louis XIV of France. As the economy stagnated the number of inhabitants shrunk steadily. The fourth sea war with the English (1780-1784) and the British blockade of Napoleon's Europe gave the final blows to the city as one of Europe's most important trade centers.

The Dutch East India Company's (VOC) shipyard in Amsterdam was set up in the 1660s and served as a production facility until 1799. It was later used by the Dutch navy and later for industry until the 1990s. Everything from ships and steam engines to trains and internal combustion engines came out of the VOC yard in its three centuries of service.

Amsterdam attracted many immigrants, particularly women, because of its reputation for free medical care and generous benefits for the poor. Poverty, abandonment, and domestic troubles often motivated women to come to Amsterdam, sometimes to give birth to and abandon their infants. Pregnant women were exempt from residency or citizenship requirements enforced by many charities. Other sick and poor women came to Amsterdam, often financed by the towns they left.[3]

In the 19th century the economy was revived by the opening of the North Sea Canal (1876) and the arrival of the industrial revolution. Amsterdam started extending outside its 17th century boundaries. The Rijksmuseum, the central train station, and the Concertgebouw were built. The old school Athenaeum Illustre (founded in 1632) was upgraded (1877) to the Municipal University (now the University of Amsterdam).

The city's population doubled by 1900, largely because of migration from elsewhere in the Netherlands. For example, 13% of the migrants came from the Dutch province of Friesland. Once in the city the Frisians and other provincials created their own clubs and societies, stimulated in part by the persistence of a separate Frisian language. The clubs and societies also functioned as a marriage market. The organizations seem to have been important for the first generation of migrants only, after which the Frisians blended into the city.

Interest in sports and physical activity increased tremendously after World War I, due mainly to municipal support for added facilities: playing fields, sports clubs, and other venues. The Amsterdam Association for Physical Education, a private group funded in large part by the city, developed facilities, organized sports groups, and, most importantly, increased physical education in the schools. The 1928 Amsterdam Olympics increased general interest in sports, which fell off somewhat in the Great Depression.[4]

In the economically stagnant city before 1850, poverty was widespread, especially among the sick and infirm, the elderly, widows with children, and workers with large families. Relief was offered to the poor by many organizations; the value of the free services cash, goods and assistance they provided was meager and was of help to the poor only when used in combination with other survival strategies. Compared to other European cities, relief in Amsterdam was modest in amount.[5]

By the 1890s the city was providing relief to poor families, typically 1.25 guilders per week as well as bread and peat for heating. Low income families in early 20th century Amsterdam moved frequently as a means of extending their finances and avoiding their debts and back rent. Most housing in the city was rental, and during weak markets landlords offered incentives such as free rent to attract families. Some renters took advantage of free rent, moving to a new home just in time to avoid the start of payments. When the rental market tightened, though the frequency of moves declined somewhat, changing residence remained a viable tactic for many poor families, especially newly married households and families headed by casual laborers. Although highly mobile, poor families in Amsterdam tended to remain within the same local area and tried to maintain contact with their social networks.[6]

In the 1920s Amsterdam extended to the south (plan Berlage), but during the Great Depression of the 1930s Amsterdam was heavily hit.

On 15 May 1940 Nazi Germany occupied the city. A large part of the city went on strike spontaneously on 25 February 1941 in reaction to the German measures taken against the Jewish population of Amsterdam. After the battle of Arnhem (mid September 1944) until the liberation by the Allied forces (May 8 1945) there was a famine in Amsterdam and its surrounding region. It is estimated that during this winter 25,000 people died of starvation. About 110,000 Jews were deported from the Netherlands to concentration camps, the majority of them from Amsterdam. Only about 5,500 Dutch Jews returned; the rest died in the Nazi camps.[7]

From the 1960s onward Amsterdam prospered again and once more saw a great influx of immigrants. It became an important center of the developing mass tourism, not only because of its museums (Rijksmuseum, Stedelijk Museum, Van Gogh museum) and its canals, but also, especially for younger tourists, because of the Dutch tolerance on soft drugs and Amsterdam's famous red light district.

In the late 1980s, almost a fourth of the labor force in Amsterdam was without a job. This was about twice the Dutch national average. In the 1970s and early 1980's, the unemployment rates in the city and nation as a whole differed only slightly. Among the unemployed in Amsterdam, the proportion of minorities rose considerably. Remarkably enough, the strong divergence manifested itself at a time when employment in Amsterdam began to increase for the first time in two decades.[8]