Infrastructure as a Service

Infrastructure as a Service (IaaS) is a type of cloud computing service, principally in which the customer obtains multiple virtual machine instances, which are then customer-configured with an operating system, middleware, and applications. Alternatively, the infrastructure might be a specific low-level service such as a Domain Name Service server, although this blurs into Platform as a Service. 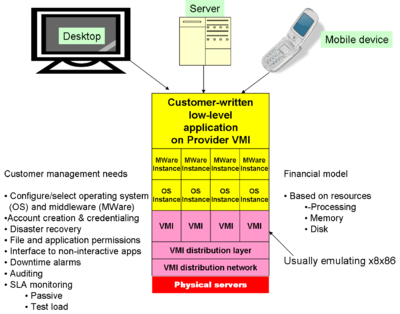 IaaS requires the most configuration of any cloud computing service, but also gives the most control and flexibility -- and opportunites for error.

The most common machine virtualized is of the Intel x86 series, with most vendors, providing at least Microsoft Windows and LINUX operating systems. One variable is whether the cloud is built on open source technology such as the Xen hypervisor, or uses proprietary VMWare. Amazon, for example, is principally open source with a do-it-yourself assumption about the customer, while AT&T and Savvis are VMWare and plan to provide professional services.

Vendors often call each instance of an operating system a virtual appliance, or simply a virtual machine instance (VMI). Each of the four stacks, below the common application in the IaaS Architecture graphic, is a VMI. Virtual appliances, regardless of their physical location, can be grouped into virtual data centers with management consoles, logging, and other facilities characteristic of data center operations. Such detailed facilities are the responsibility of SaaS and PaaS vendors.

The charging model is based on the use of resources, such as processing time, memory, and mass storage. There are, however, different ways to offer these resources. Some IaaS vendors are targeting SaaS and PaaS cloud providers, allowing them to dynamically configure systems of physical servers, as required by their customer demand, but not requiring the customer to construct a data center. This model is sometimes called Physical Infrastructure as a Service.

With a start of operations in March 2006, Amazon Elastic Compute Cloud (Amazon EC2) was the first to market. It allows build virtual appliances to be built from choices among operating systems, data bases, web servers, etc. Amazon offers a variety of preconfigured stacks called Amazon Machine Images (AMI), such as:[1]

In early 2009, a customer could organize 1500 virtual appliances into a data center. A number of PaaS and SaaS clouds are known to run over it. Some of the AMIs are customer-contributed and the security of their configurations is not guaranteed by Amazon.

Some cloud computing services specialize in compute-intensive supercomputer applications using highly distributed parallel processsing. [3] Terremark differentiates its approach from grid computing, which is intended for compute-intensive but non-interactive services. "Grid is different. In that, you're paying for minutes (of computing power) and you're on a shared infrastructure in which your grid job is typically not designed to execute at any given instance in time. Grid is great for scientific applications, supercomputing applications, where you need a lot of power but don't need a split-second response time."[4]