Academic and non-academic biologists study human physiology to understand the workings of the human body and its component parts, studying those workings at many levels in the hierarchy of the human body’s complex and dynamic organization, using many levels and modes of scientific investigation.[1] [2] Like all physiologists, physiologists of the human organism aim to understand/explain the essential, vital, dynamic integrated processes of that living system — viz., to describe its organization structurally and functionally, spatio-temporally, in relation to other living systems, to degree of complexity and nature of emergent properties, to its role in its ecology, all in the light of evolution, physical science, and a progressive attitude to human welfare.[3] 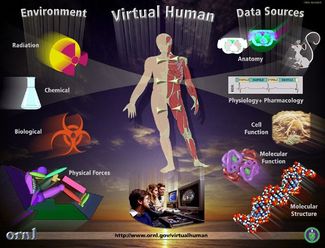 (PD) Drawing: Oak Ridge National Laboratory [ORNL] Virtual Human Project
A human simulation tool, the Virtual Human, is under development at ORNL. The model will incorporate physics (such as mechanical and electrical tissue properties) and biology (from physiology to biochemical information), so that responses to varied stimuli (biological, chemical and physical) can be predicted mechanistically and results viewed three-dimensionally.

By workings of the human body, physiologists refer to the underlying mechanisms that operate to manifest themselves in observable properties, functions and behaviors of the body and its components (e.g., sweating, digestion, muscle contraction, vision, cell division, information processing, cognition). They emphasize sequences of cause-effect interactions. By one or more levels of scientific investigation physiologists refer to such levels as the fundamental chemical level, intracellular molecular networks, cellular activity, organ activity, inter-organ interactions, and whole-body behavior — always in relation to a level's environment. Instrumental modes of observation and computerized modes of computation and analysis abound.

• how does the body respond to large or small decreases or increases in ambient temperature;
• which of its component parts participate in the response;
• in what way do they participate;
• what accounts for the mechanisms that operate in each individual component response;
• how does the overall response become integrated;
• How important is the response to the person's health;
• how efficient and how effective is the response.


The description of the human body’s complicated coordinated response to an unusually hot or cold day, and many other perturbations from outside or inside the body, do not admit of simplistic accounts — i.e., accounts sufficient to fully explain the response, predict its properties, or control it.

This article will describe the subsystems that comprise the components of the living human system and attempt to show how those subsystems interact in a coordinated way that contributes to the emergence, development, and maintenance of the self-organizing, automous human living system. Traditionally human physiologists try to identify the major functionalities required for human survival and reproduction — biological imperatives — and study the inter-organ systems of the body that subserve them. The latter include the systems

Common types of subsystems abound in those inter-organ body systems that physiologists study, including those referred to as autocrine and paracrine systems.

In living systems, regulation by physiological mechanisms of structure and function from subcellular to organismal levels serves the biological imperatives of survival and reproduction. Although many physiologists, including those who write introductory/intermediate textbooks, consider the core and guiding principle of regulation by physiological mechanisms as vested in homeostasis, the maintenance of stability that characterizes the goal of homeostasis cannot fully serve the biological imperative of viability — survival and reproduction. Stability would not fit the need for viability in the face of the numerous environmental changes that challenge a human organism on a within-day, seasonal, life-cycle, and age-appropriate basis. The steady-state set-points of the parameters of the internal milieu monitored by homeostasis need to change or lose precedence to permit infants and children to grow; women to gestate and lactate; everyone to cycle between waking and sleeping, eating and fasting, stressing and relaxing. Those, and such conditions as the stresses of jet traveling, of enduring cold winters and torrid summers, of seasonal variations in sunlight exposure, require a viability-maintaining physiological regulatory system beyond the capabilities of stability-maintaining mechanisms as traditionally conceptualized for homeostatic mechanisms.[3] We discuss those physiological regulatory mechanisms in the terminology of allostasis, mechanisms that work in complement with those of homeostasis.

To understand human physiology we must retain a temporal perspective in multiple dimensions.

A complete description of the so-called normal physiology of a human, at any level of narrative or explanatory description, depends on the human's age. Humans age as fetuses, newborns, infants, children, teenagers, young adults, middle aged adults, elderly, the so-called very old, including centenarians. The organization of the living human system changes with aging, and normally it senesces. Such growth, development, aging and senescing reflect changes in physiology, human physiology proceeding in some ways qualitatively differently, in some ways quantitatively differently, in many ways the same.

The particularities of physiology of fetuses and infants can determine those of the adult, sometimes adversely. At any age, seasonal differences can influence human physiology. Women of reproductive age exhibit monthly physiological differences, and both men and women exhibit around-the-clock daily physiological changes (circadian rhythms).

Homo sapiens' physiology continued and continues to evolve since the time our species emerged in an anatomically identifiable Homo sapiens form as judged from fossil remains dating back nearly 200,000 years ago (200 kya).

Cultural evolution also played an important role in the changes of human physiology since the inception of our species, and continues to so, as lifestyles change within cultures and differ among them. What passes for 'normal' physiology may sometimes more properly qualify as pathophysiology.

References and notes cited in text as superscripts