From Citizendium
(Redirected from Genetic)
Jump to navigation Jump to search

Image: courtesy National Library of Medicine.
In 1909, Danish botanist Wilhelm Johanssen coined the word gene for the hereditary unit found on a chromosome. Nearly 50 years earlier, Gregor Mendel had characterized hereditary units as factors— observable differences that were passed from parent to offspring. Today we know that a single gene consists of a unique sequence of DNA that provides the complete instructions to make a functional product, called a protein. Genes instruct each cell type— such as skin, brain, and liver—to make discrete sets of proteins at just the right times, and it is through this specificity that unique organisms arise. [1]

A gene (from the Greek γεννάω gennao, to beget or produce) is generally viewed as the basic physical and functional unit of heredity.[2] Genes, which are made up of DNA, act as blueprints to make molecules called proteins. Scientists sometimes consider other segments of DNA genes as well, such as the segments that encode blueprints for nucleotide polymer structures like ribosomal RNA (rRNA) and transfer RNA (tRNA), or DNA sites at which information concerned with gene regulation and expression is located.

Throughout the biological disciplines, the word 'gene' refers to some heritable 'entity' or 'system', related to DNA, that plays a role in the development of characteristics of individual organisms and a role, over an evolutionary timescale, in the development of species. That definition, with all its lack of specificity, and perhaps because of that lack of specificity, seems hardly disputable, though likely editable.

Can we define 'gene' more precisely? It would appear that we can, but in doing so we find more than one more-or-less precise definition of 'gene', or 'gene concept', each having a different meaning, in the semantic sense that "[w]ords mean the thing they make us think of...."[3] Biologists think of different things in relation to the word 'gene', and therefore employ a multiplicity of concepts of genes.[4] [5] [6]

Griffiths and Stotz[5] describe three different concepts of the gene:

History and evolution of the concept of the gene

In eukaryotes (organisms whose cells have nuclei, such as plants, yeasts and animals), genes are usually arranged together in multiple long thread-like arrangements called chromosomes. Chromosomes typically come in pairs, and there can be hundreds, sometimes thousands, of genes in one chromosome. Prokaryotes (organisms such as common bacteria) generally have a single large circular chromosome, but often possess other miniature chromosomes called plasmids.

Alleles are alternative versions of the same gene with differences in their sequence of DNA bases. These differences account for variations in inherited characteristics.

Sexually reproducing organisms inherit one allele from each parent, and so have a total of two alleles for each gene. When sperm and egg cells are generated, each is given only one allele for each gene. These cells are commonly referred to as haploid cells. When the sperm fertilizes the egg, a cell called a zygote is produced. Zygotes, like most of the cells that subsequently divide, grow and form a complete organism, are referred to as diploid. Generally, when a normal haploid cell contains n chromosomes, the resulting fertilized dipliod cell will contain 2n chromosomes. For more information on specific situations where this does not happen, see nondisjunction.

In a heterozygote, when one allele determines the appearance of the individual it is called the dominant allele. When the other has no noticeable effect it is called the recessive allele. Another term sometimes used for homozygous organisms is "true breeding" because of the certainty that their offspring will possess the given trait. The appearance of a given trait is referred to as the phenotype of the individual, whereas the complete set of alleles (dominant and recessive) is referred to as the genotype.

In reality, a more complex combination of gene expression is common. In some cases, the offspring's appearance is found to be in between the two appearances. This can be seen in cases such as hybrids of red and white roses that can appear pink. This phenomonon is called incomplete dominance.

Most genes contain the information needed to make functional molecules called proteins. A few genes produce other molecules that help the cell assemble proteins. The journey from gene to protein is complex and tightly controlled within each cell. It consists of two major steps: transcription and translation. Together, transcription and translation are known as gene expression. 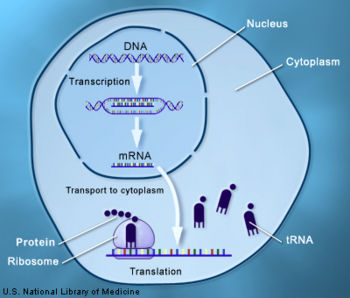 Image: Courtesy National Library of Medicine.
Through the processes of transcription and translation, information from genes is used to make proteins.

During the process of transcription, the information stored in a gene’s DNA is transferred to a similar molecule called RNA (ribonucleic acid) in the cell nucleus. The type of RNA that contains the information for making a protein is called messenger RNA (mRNA) because it carries the information, or message, from the DNA out of the nucleus into the cytoplasm.

Translation, the second step in getting from a gene to a protein, takes place in the cytoplasm. The mRNA interacts with a specialized complex called a ribosome, which “reads” the sequence of mRNA bases. Each sequence of three bases, called a codon, usually codes for one particular amino acid. (Amino acids are the building blocks of proteins.) Transfer RNA (tRNA) then assembles the protein, one amino acid at a time. Protein assembly continues until the ribosome encounters a “stop” codon (a sequence of three bases that does not code for an amino acid).

The flow of information from DNA to RNA to proteins is one of the fundamental principles of molecular biology. It is so important that it is sometimes called the “central dogma.”

Each DNA is made up of the sugar 2'-deoxyribose linked to a phosphate group and one of the four bases: guanine (G), adenine (A), thymine (T), and cytosine (C) These nucleotides are placed in a unique order to code for all of the genes in all living organisms.

A gene mutation is a permanent change in the DNA sequence that makes up a gene. Mutations range in size from a single DNA building block (DNA base) to a large segment of a chromosome.

Gene mutations occur in two ways: they can be inherited from a parent or acquired during a person’s lifetime. Mutations that are passed from parent to child are called hereditary mutations or germline mutations (because they are present in the egg and sperm cells, which are also called germ cells). This type of mutation is present throughout a person’s life in virtually every cell in the body.

To function correctly, each cell depends on thousands of proteins to do their jobs in the right places at the right times. Sometimes, gene mutations prevent one or more of these proteins from working properly. By changing a gene’s instructions for making a protein, a mutation can cause the protein to malfunction or to be missing entirely. When a mutation alters a protein that plays a critical role in the body, it can disrupt normal development or cause a medical condition. A condition caused by mutations in one or more genes is called a genetic disorder.

In some cases, gene mutations are so severe that they prevent an embryo from surviving until birth. These changes occur in genes that are essential for development, and often disrupt the development of an embryo in its earliest stages. Because these mutations have very serious effects, they are incompatible with life.

It is important to note that genes themselves do not cause disease—genetic disorders are caused by mutations that make a gene function improperly. For example, when people say that someone has “the cystic fibrosis gene,” they are usually referring to a mutated version of the CFTR gene, which causes the disease. All people, including those without cystic fibrosis, have a version of the CFTR gene.

In humans, genes vary in size from a few hundred DNA bases to more than 2 million bases. The Human Genome Project has estimated that humans have between 20,000 and 25,000 genes. Most genes are the same in all people, but a small number of genes (thought to be less than 1 percent of the total) are slightly different between individuals.

Major sections of this article were taken from the National Library of Medicine's "Genetics Home Reference" Website accessed January 27, 2008.