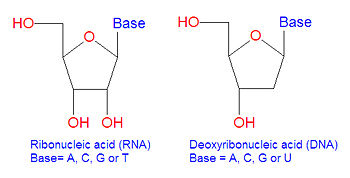 Ribonucleic Acid, or RNA, is a nucleic acid polymer made using the nucleotides of adenosine, guanosine, uridine and cytidine, that is used for a variety of biological functions in living systems. In cells, it is primarily involved the creation of proteins based the genetic code stored in DNA. The primary difference between RNA and DNA is the 2-doubleprime-substituent of the ribose sugar unit. In RNA it is a hydroxyl group (OH), and in DNA it is a proton (thus the deoxy- naming of DNA). The other difference is that uracil is used in place of thymine that is used in DNA.

In cells, messenger RNA (or mRNA) is transcribed from a DNA template in the cell nucleus. Unnecessary pieces of the strand, called introns, are spliced out before the mRNA goes to the ribosome, where its sequence is read to create a protein.

Ribosomal RNA (or rRNA) is synthesized in the nucleolus, a small organelle within the nucleus, where it is formed into the main subunits of the ribosome. 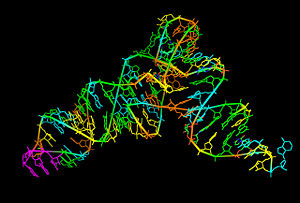 Yeast phenylalanine tRNA. The anticodon region is colored magenta, and the bases, A, C, G and U are colored cyan, yellow, green and orange, respectively.[1]

Amino acids are brought to the ribosome by small, specially-folded strands of RNA, called transfer RNA (or tRNA). A specific amino-acid-carrying tRNA molecule "reads" the codon on the mRNA, bringing in the appropriate amino acid. In the example shown at right, the unpaired bases in the anticodon region (O-methyl-guanine:Adenine:Adenine), shown in magenta, would base-pair with the mRNA codon for phenylalanine (UUC or UUU) and transfer a phenylalanine to the growing protein chain. Each type of transfer RNA has its own distinct anticodon region so that the correct amino acid gets transferred to the correct place during protein synthesis.