The neural and hormonal pathways that are important in humans involve many elements that are also present in other organisms, and understanding the evolution of appetite regulating systems can tell us much about their organisation and function in humans.

When we eat, and how much we eat, are controlled by neuronal networks in the hypothalamus that respond to a wide variety of internal and external signals; these include both neural and hormonal signals from the stomach;, hormonal signals from fat stores; and internal circadian signals that determine meal times. An important target for these signals is a neuronal population in the hypothalamus that expresses the pro-opiomelanocortin (POMC) gene. This gene has a particular importance in appetitite regulation; one product of POMC, the peptide alpha melanocyte stimulating hormone (α-MSH) is a powerful inhibitor of appetite though its actions on MC4 receptors. POMC and its end-products have not only been identified in humans, but also in many other vertebrates. This article focusses on the structure and function of the POMC gene. It highlights variations between species, allowing a potential evolutionary route, originating at a common ancestral gene, to be mapped out.

The human POMC gene encodes a large precursor protein, which is cleaved by prohormone convertase enzymes (PCs) into several different peptides. These include the melanocyte-stimulating hormones (alpha-, beta-, gamma- MSH), adrenocorticotropic hormone (ACTH), the lipotropins, and beta-endorphin [1]. ACTH and the MSHs are referred to as melanocortins, and all have the same core amino acid sequence, HFRW [2].

The human POMC gene is on chromosome 2p23, and has three exons and two large introns . Only exons two and three are translated; exon two codes for the signal peptide and the initial N-terminal amino acids, while exon three codes for most of the translated mRNA. After excision of the introns to form a “parent” POMC, this molecule is then cleaved by PC1 and PC2. These act at cleavage sites consisting of paired basic residues, arginine and lysine, and end-products of their action depend on which sites are used. As PC1 and PC2 act at different sites, and as their expression varies in different tissues, processing of POMC is tissue-specific. For example, the anterior pituitary corticotroph cells only express PC1, which results in the cleavage of POMC into the 'NH2-terminal peptide', 'joining peptide', ACTH, β-LPH, and some γ-LPH and β-endorphin. However, in rodent melanotroph cells and in the human hypothalamus and placenta, both PC1 and PC2 are expressed. This means that all the cleavage sites are used and smaller peptides are produced. The NH2-terminal peptide is cleaved to the γ-MSHs, ACTH gives rise to α-MSH and CLIP (corticotropin-like intermediate lobe peptide) and γ-LPH to β-MSH.[3][4] 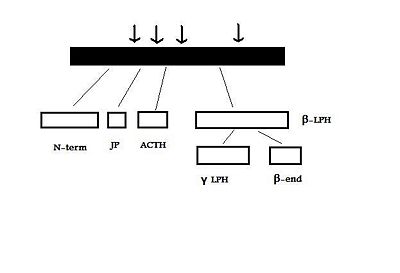 The POMC gene is expressed in several tissues in man and other animals. These include the anterior, and intermediate lobes of the pituitary gland, the nucleus tractus solitarii (NTS) of the caudal medulla, and the arcuate nucleus of the hypothalamus.

The final products from the cleavage of POMC have a variety of functions. The melanocortins act on melanocortin receptors (MCRs): there are five types of MCR, and different melanocortin peptides bind to these with different affinities; for example, ACTH binds mainly to MC2R.β-en dorphin, on the other hand binds to opioid receptors [5] [2]

In mammals, α-MSH is generally assumed to be the main POMC product involved in appetite regulation. It is a potent inhibitor of appetite, acting on MC3-R and MC4-R in the arcuate nucleus. [6] Rodents do not express β-MSH, but it may have an important role in human appetite regulation. [7]

Desacetyl-α-MSH is a precursor for α-MSH and is widely distributed in the brain.[8] Although desacetyl-α-MSH displays a similar potency for receptor binding to α-MSH, it does not affect food intake except at extremely high doses.[9]

The arcuate nucleus contains several dirrerent neuronal types. There are two main populations of neurons regulating appetite; those expressing POMC, and those co-expressing neuropeptide Y (NPY) and agouti related peptide (AgRP), and which also signal with the inhibitory neurotransmitter GABA. The POMC neurones form part of the satiety pathway, and the NPY/AgRP neurones are part of orexigenic signalling.[10] AgRP acts as an inverse agonist at MC3-R and MC4-R, to help stimulate feeding.[10]

Ghrelin is the endogenous ligand for the GHS-Receptor, which is densely expressed in both the arcuate nucleus and the ventromedial hypothalamus. [13] Ghrelin increases the activity of NPY/AgRP neurons. [14]

There are five NPY receptors (named Y1-Y5), and NPY down-regulates POMC mRNA expression through the Y2 receptor.[15] PYY3-36, a satiety signal released from the gut after a meal, acts as an agonist at the presynaptic Y2 receptors on the nerve terminals of NPY/AgRP/GABA neurons. This is thought to lead to suppression of NPY and GABA release, and hence to increased electrical acivity of the POMC neurones in the arcuate nucleus.[16]

Species Variation in the POMC Gene 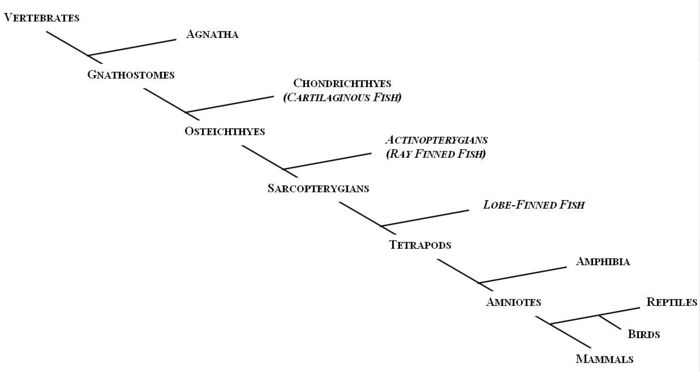 The first vertebrates to evolve, about 530 million years ago, were jawless. Members of the agnatha superclass, the oldest extant class of vertebrates, are the jawless descendants of these early vertebrates. Modern day agnathans include lampreys and hagfish. The Gnathostomes (jawed vertebrates), appeared during the Middle Devonian era (~380 millions years ago) and bifurcated into the cartilaginous fish (Chondrichthyes) and the bony fish (Osteichthyes).

The Chondrichthyes diverged from the other major class of gnathostomes, the Osteichthyes, between 440 and 420 million years ago; and by 410 million years ago the two extant subclasses had been formed, Elasmobranchi and Holecephali. Osteichthyes is the largest class of vertebrates and can be divided into the Actinopterygians (ray-finned fish) and the Sarcopterygians (lobe-finned fish). The earliest tetrapods evolved from a common ancestor from the Sarcopterygii class during the Devonian era.

Two POMC-related DNA sequences were found in lamprey using cDNA cloning. It is thought that these two genes originated from a single ancestral lamprey POMC gene which was duplicated. The two genes then evolved and diverged according to their tissue-specific functions. The final products of the two genes, after post-translational modification, are the same as in gnathostomes.[5] One gene wo encodes two MSH sequences (MSH-A and MSH-B) and beta-endorphin, but not ACTH, and so was named proopimelanotropin (POM). The other gene encodes ACTH, a different beta-endorphin and nasohypophyseal factor, and was named proopiocortin (POC). The gene structures of POM and POC were consistent with gnathostomes POMC (three exons and two introns).[17]. Northern blot analysis showed tissue specific expression of POM and POC in the pars intermedia and pars distalis respectively, and similar distribution of MSH and ACTH to other vertebrates.[18]

POMC organisation among vertebrates in the Sarcoptergii class, consisting of the lobe-finned fish and the tetrapods, is very similar[2]. POMC in tetrapods, as described above, has three melanocortin sequences (γ-MSH, ACTH/α-MSH, and β-MSH) and a β-endorphin sequence. Lobe-finned fish, consisting of the lungfish and coelacanths [19], also have three MSHs in their POMC, as well as one β-END. There are also many similarities between the POMC amino acid sequences of species within the Sarcoptergii class[2]. This highlights the fact that tetrapods and lobe-finned fish share a common POMC ancestor. However, mutations have been found in the core sequence of the γ-MSH region in POMC of one species of lobe-finned fish (the Australian lungfish). Similar mutations have been found in some ray-finned fish, but not in other lobe-finned fish, or tetrapods [20]. This suggests that in the Australian lungfish, the γ-MSH sequence may be degenerating. This is similar to what has occurred in ray-finned fish.

Like the Sarcoptergians, some ray-finned fish, Actinopterygii) such as the paddlefish and the sturgeon, have three MSH regions in their POMC sequences. However, mutations have been found in the core sequence of the γ-MSH sequence in these species, and at the proposed cleavage sites marking this region[20][5], which probably means that it is non-functional and γ-MSH is not produced[21][2]. These mutations are similar to those found in the Australian lungfish.

All teleosts (a type of ray-finned fish), do not have the γ-MSH region at all. By sequencing the nucleotides of POMC mRNA, Kitahara et al.[22] noted its absence in salmon, and the same has been found in other teleosts[2]. This supports the theory that the POMC gene in ray-finned fish accumulated mutations in the γ-MSH region over time, leading to its eventual deletion in teleosts[20][5][23].

Some ray-finned fish also express two or more POMC genes. In the paddlefish, two POMC cDNA clones have been found[23]. This is the same in sockeye salmon, rainbow trout, and sturgeon[19]. However, in the flounder, three have been noted (POMC-A, POMC-B and POMC-C)[24]. It has therefore been suggested that there has been duplication of the POMC gene in these ray-finned fish. Unlike in the lamprey, these genes are still all co-expressed in the pituitary[2] and encode the same hormones as the tetrapod POMC. However, there are some differences between the two/three POMC genes expressed. For example, the β-MSH region is more highly conserved than the β-endorphin region in the paddlefish[23] and POMC-C in the flounder has mutations in the β-endorphin sequence[19]. It has been suggested that in ray-finned fish, the degeneration of the γ-MSH sequence occurred after the duplication of the POMC gene[23].

The major distinguishing feature of Chondrithyan POMC is the presence of a fourth MSH sequence, δ-MSH, between the ACTH/α-MSH and β-MSH domains. The presence of δ-MSH exclusively in all Chondrichthyes suggests that it emerged after the divergence of the Chondrichthyans, but before the radiation into subclasses.[5]

The four MSHs can be classified into two groups, based on similarities in amino acid sequence and domain length: α-MSH/γ-MSH and β-MSH/δ-MSH. A region between δ- and β-MSH, known as the C-terminal extension of δ-MSH (CTED), was found to be very similar to the β-endorphin domain.[25] It has therefore been hypothesised that internal gene duplication of the β-MSH and β-endorphin domains, and subsequent mutations in the duplicated region, led to the formation of δ-MSH and CTED. 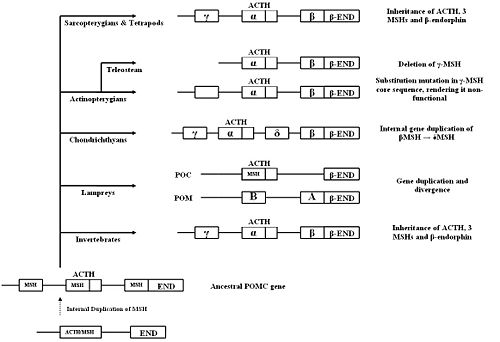 POMC peptides similar to those in vertebrates have been identified in invertebrates. The POMC genes contain the same domains in the same sequential order. Sequence identity of the leech POMC in its entirety was low when compared to vertebrate POMC, but ACTH and MSH display very high (over 80%) degrees of identity. Leech α-MSH displays the same inhibitory action on human leukocytes as vertebrate α-MSH. So, despite hundreds of millions of years of separate evolution and variations in peptide sequence, leech MSH is still able to act on a specific human MSH receptor.[26]

Molluscs contain a POMC-like peptide, similar to those found in mammals. Peptides formed from the precursor include γ-MSH, α-MSH, ACTH and a β-endorphin-like peptide.[27]

Taken together, these findings support the theory that POMC and its end-products originated early in chordate evolution. The common existence of α-, β- and γ-MSH in the same order suggests that they appeared before the bifurcation of invertebrates and vertebrates. At some point, an ancestral POMC gene may have existed, containing a single melanocortin domain and a β-endorphin domain. The ACTH/α-MSH sequence may have been the original melanocortin, as it has been very highly conserved throughout evolution.[2]