Adrenocorticotropic hormone (ACTH), a product of the Pro-opiomelanocortin (POMC) gene, is a hormone secreted by the corticotrophs of the anterior pituitary gland in response to physical or emotional stress. Its major effects are to increase the production and release of corticosteroids from the adrenal cortex. These effects are mediated by the interaction of ACTH with ACTH receptors. ACTH secretion is pulsatile and also shows a diurnal variation, with the basal plasma concentrations being highest on waking in the morning and lowest at midnight.

Measurements of ACTH are used as an indicator of pituitary function in the investigation and differential diagnosis of Addison's disease (caused by insufficient secretion of cortisol), Congenital adrenal hyperplasia, and Cushing's syndrome (caused by hyperproduction of cortisol). Cushing's disease refers to one particular cause of Cushing's syndrome - the presence of a tumour (adenoma) in the pituitary gland that produces excess ACTH. 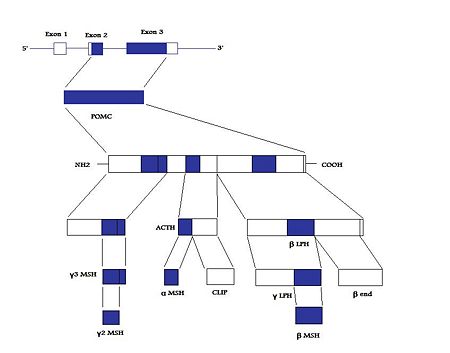 All of the hormones of the anterior pituitary gland (the adenohypophysis) are released from endocrine cells that, in mammals, are not directly innervated, yet the release of these hormones remains under the control of the brain. The brain exerts its control over the anterior pituitary gland by means of releasing factors and release-inhibiting factors; these are blood-borne substances that are released by hypothalamic neurones into a system of blood vessels at the base of the brain - at the median eminence. These vessels, the hypothalamo-hypophysial portal vessels, transport the hypothalamic factors to the adenohypophysis where they bind to specific receptors on the surface of the hormone-producing cells. This binding triggers the release, from the pituitary endocrine cells, of vesicles containing the hormone by a process of calcium-dependent exocytosis.

Early studies showed that when the pituitary is disconnected from the hypothalamus, ACTH output falls. Attempts to localise the hypothalamic source of a releasing factor for ACTH focussed attention upon the paraventricular nucleus, and gave rise to the theory that the peptide vasopressin might be the releasing factor. When given in large amounts, vasopressin will result in ACTH release; the pituitary corticotrophs express a vasopressin receptor subtype (V1b) which differs pharmacologically from both the vascular (V1a) receptors and the renal (V2) receptors; However the hypothesis that vasopressin was the releasing factor for ACTH fell from favour when it became clear that:

1) plasma concentrations of ACTH and vasopressin show no consistent correlation; and

A 41 amino acid peptide was subsequently isolated and sequenced, that is now recognised as the corticotropin-releasing hormone (CRH; also known as corticotropin-releasing factor, CRF). This peptide is quite distinct from vasopressin, but is also localised to the paraventricular nucleus. Whereas vasopressin is mainly present in magnocellular neurones which project to the posterior pituitary, CRH is present in parvocellular neurones which project to the external layer of the median eminence, where it is secreted into the portal blood. The CRF neurones contain receptors for glucocorticoids, which exert an inhibitory, negative-feedback control on CRH release and hence on ACTH secretion. Glucocorticoids also suppress ACTH secretion by direct actions on the corticotrophs.

However, while CRH is a potent secretagogue for ACTH, its actions are strongly potentiated in the presence of vasopressin, a finding which gave rise to the suggestion that vasopressin and CRF are co-regulators of ACTH secretion.[3]

After adrenalectomy, the CRH cells increase their synthesis of CRH, and the CRH-containing terminals in the median eminence increase in number and staining density. Moreover, and importantly, after adrenalectomy about 79% of the CRH neurones in the paraventricular nucleus also begin to express both vasopressin and its mRNA, suggesting that populations of hypothalamic neurones can "switch on" the synthesis of more than one active substance in response to physiological challenges.

Thus ACTH secretion is regulated by a subpopulation of the parvocellular neurones in the paraventricular nucleus. This subpopulation consists of neuroendocrine neurosecretory neurones that project to the median eminence; they normally synthesize CRH but can additionally synthesize vasopressin, especially in response to physiological challenge. Vasopressin and CRH are both secretagogues for ACTH, and in combination they have synergistic actions on ACTH release.