Electrophoresis involves the migration of particles or molecules (in particular proteins, DNA, and RNA) through an electric field that separates them exclusively on the basis of their size or molecular weight. The direction the molecule moves depends on its charge while the rate of migration is affected by the size, shape, density of the gel and the strength of the applied current. Electrophoresis is a very simple process and relatively quick with a high resolution. In addition electrophoresis is an extremely useful method to estimate the purity of a sample. The technique is also very sensitive to slight variations in molecular weight, size, and even shape of nucleic acids and proteins [1]. Electrophoresis can also be useful when it doesn’t affect the molecule’s structure or denature the protein Cite error: Invalid <ref> tag; invalid names, e.g. too many 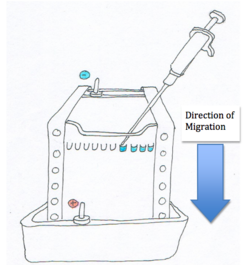 As shown in the diagram, the nucleic acids or proteins are loaded into the wells or depressions at one end on the eletrophoretic medium (also known as a ‘’gel’’). The apparatus also has two electrodes on either side of the eletrophoretic medium. The anode is positively charged while the cathode is negatively charged. When a power source connects the two electrodes the charged particles begin to migrate towards the oppositely charged electrode due to the electric potential field within the media [1].

The velocity of the particles are related to the electric field potential by the following equation:

Where E is the electric field potential that provides the driving force on the particle. μ is the electrophoretic mobility and v is the velocity of the particle [1]. For proteins, the equation can also be written as

Smaller molecules move faster in the gel than larger molecules and therefore they end up closer to the positive anode. Molecules that are about the same size move at the same rate through the electrophoretic medium. The figure to the right shows the molecules in ‘’bands’’. The column on the far left contains bands with known molecular weights. This is useful to determine the molecular weight of an unknown particle [2].

Generation of Heat in Electrophoresis Instrumentation

Due to the electric field in electrophoresis, the equipment generates a large amount of heat that needs to be dissipated for maximum efficiency. Since the gel’s viscosity and density changes with an increasing temperature, it is important to remove as much heat as possible from the apparatus otherwise the gel will melt. As a solution, increasing the surface area to volume ratio of the gel usually helps to dissipate the heat. For instance, capillary electrophoresis efficiently removes heat because of its high surface-area to volume ratio. Similar to native electrophoresis, this commonly used method maintains a constant electric field at a stable pH where the separation depends upon mobility [1].

One of the major factors affecting the separation of nucleic acids or proteins is the density of the gel. Polyacrylamide Gels are the most commonly used gels for electrophoresis and are mainly used to separate smaller proteins or fragments of nucleic acids (with molecular weights as low as 2000). Agarose gels on the other hand are used to separate much larger molecules (above a molecular weight of 106) [3]. As the percentage of agarose or polyacrylamide increases in the solution, the gel becomes denser. As a result, the nucleic acids or proteins move slower since the pore size has decreased. The resolution or distance between the fragments (or bands) relative to their width, therefore, depends on the density of the gel [3]. The density of the gel chosen is usually one that adequately separates all the components of interest.

There are several detection techniques used to visualize bands. The most commonly used technique involves chemically staining proteins with coomassie blue or silver. Another method covalently bonds proteins to fluorescent molecules before electrophoresis.

Nucleic acids are commonly visualized by illuminating the bands under a UV light after binding them to ethidium bromide [3]. Other methods include: chemical staining, fluorescence, radioactivity, immunoelectrophoretic techniques and on-column/end-column detection [1].

Staining is an easy way to make a rough estimate of the quantity, purity and molecular weight of a compound. In general, the intensity of the staining is proportional to the concentration of the compound [4]. Generally, darker bands contain a larger quantity.

Gel Electrophoresis of DNA and RNA

Negatively charged phosphate ions on nucleic acids (DNA and RNA) give them an overall negative net charge. As a result, the negatively charged nucleic acids will migrate towards the positive anode in the gel thereby separating the molecules. The bands can then be visualized under UV light if ethidium bromide was added to the nucleic acid before beginning electrophoresis [4]. Usually a photograph of the gel is taken in order to approximate the quantity of the fragment.

Molecules are separated in their native form (not denatured) at a constant pH with a constant electric field. Separation depends upon mobility. This process uses a pH around 8 or 9 where most proteins are negatively charged so that they move towards the anode. The bands can then be visualized by staining the proteins with coomassie blue or silver or by adding fluorescent protein labels [1].

Denaturing gel electrophoresis is done with a constant electric field at a constant pH. Since it is necessary for proteins to have a similar charge to mass ratio during electrophoresis, sodium dodecyl sulfate (SDS) is added to the solution. SDS binds to the positively charged residues of the proteins and gives them an overall net negative charge. Otherwise the proteins may not migrate at the same rate or in the same direction on the gel due to their different intrinsic charges. As a result, the negatively charged proteins bound to SDS will migrate towards the positive side of the electric field in the gel [2]. However, as a consequence SDS also denatures the proteins so that mobility in the gel depends only on molecular weight. Therefore, gel electrophoresis separates proteins exclusively on the basis of molecular weight, without any interference from charge.

Similar to native electrophoresis, the protein bands are stained with coomassie blue or a fluorescent protein label is added. Analysis of the gel provides a rough estimate of the concentration of proteins in the solution or the number of subunits in the protein [2]. Once again, the approximate molecular weight of an unknown protein can be determined by comparing it against proteins of known molecular weight. 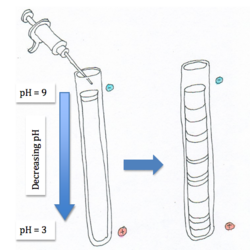 Isoelectric focusing separates proteins based on their isoelectric points (pI) by establishing a pH gradient within the gel. Ampholytes are distributed across the gel to form the pH gradient [2]. Once the proteins are added at one end of the gel they will begin to migrate towards the positively charged anode due to the constant electric field. The proteins will continue moving until their isolectric point (pI) matches the pH, at which point they will have zero net charge. This technique is mainly used to determine the isoelectric point of an unknown protein and to separate proteins with the same molecular weight but with different pI values. 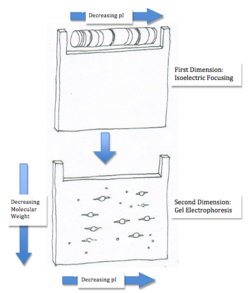 Two-dimensional electrophoresis encompasses both isoelectric focusing and gel electrophoresis. After separating the proteins by isoelectric focusing, the first gel is turned sideways and placed in the second gel where the proteins begin to migrate according to their size. Using two-dimensional separation one can quickly estimate both the molecular weight and the isoelectric point of a protein. More importantly, this technique can also be used to distribute proteins throughout a gel with identical molecular weights but different pI values or vice versa [2]. This method is also extremely useful for solutions with a large number of proteins or a mixture containing similar proteins. Although, the process cannot be used for proteins that are extremely acidic or basic, where their pI is outside the pH range [3]. However, the main disadvantage in using this method is comigration of proteins (or the aggregation of proteins) that arise due to interactions with each other [3].

Two-Dimensional Electrophoresis for DNA and RNA

The three blotting techniques that involve transferring proteins or nucleic acids from a gel to nitrocellulose paper are Southern blotting, Northern blotting and Western blotting. The following table summarizes each method. Blotting is mainly useful for identify a specific molecule on a gel by probing with a ligand.

In Southern blotting, single stranded DNA fragments that have been distributed throughout a gel by electrophoresis are transferred to nitrocellulose paper. This is done by essentially laying the nitrocellulose paper on top of the gel and allowing capillary action to pull the alkaline solution and DNA upward through the gel [6]. Once all the DNA fragments have been transferred, a solution containing a radioactively labeled probe (usually) is added to the nitrocellulose blot [6]. The single stranded DNA or RNA probe then binds to its complementary DNA fragment in the matrix. Bands containing DNA that base-paired with the probe can then be easily detected [6]. The same procedure is used in Northern and Western blotting, except the probe and detection method vary.