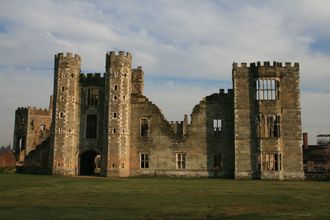 (CC [1]) Photo: Ivanka Majic
The front of Cowdray House seen from the west

Cowdray House, near the town of Midhurst in Sussex, was a great 16th-century Tudor mansion that was badly damaged by fire in 1793. At the time of the fire, it was architecturally comparable to many of the great palaces and country houses of that era. Today the ruins are still considered important enough to be Grade I listed.

Construction began in the 1520s after Sir David Owen demolished a 13th-century manor house on the site and was completed by William Fitzwilliam in 1542. FitzWilliam and his family were linked to royalty, and Tudor monarchs stayed at Cowdray House five times in the 16th century. Possession of the House descended through FitzWilliam's heirs, who later gained the title of Viscount Montague, until 1843 when it was sold to the Earl of Egremont.

In 1908, Sir Weetman Dickinson bought Cowdray House from the Earl of Egremont and began restoring the fire-ravaged ruins. He became the first Viscount Cowdray and his heirs inherited the property. Though owned by the Viscount Cowdray, the building is maintained by the Cowdray House Trust, a charity established in 1996. In the early 20th century the ruins were opened to the public, however their continued decay meant that in the 1980s the site was closed for safety reasons. After a multi-million pound restoration project lasting two years, Cowdray House was reopened to the public in 2007.

The Bohun family owned Coudreye, and in 1273 Sir John Bohun began building a manor house there. The estates descended with the family until the late 15th century. When the Bohun line became extinct in the late 1490s Sir David Owen inherited the family property through his marriage to the daughter of the last John Bohun.[1] Beginning in around 1520, Owen set about demolishing the 13th-century manor house at Coudreye and building a grand house for himself. Owen did not live to see Cowdray completed, and died in 1535.[2] 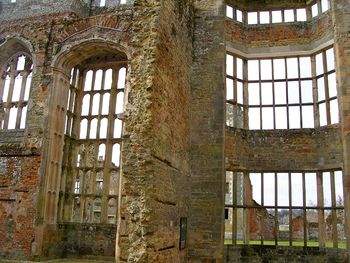 (CC [2]) Photo: Duncan Toms
The ruins of Cowdray House were consolidated in the early 21st century. This photograph is of the inside of the east range.

Cowdray House was sold to Sir William Fitzwilliam in 1528 for £2,193 6s 8d. The sale was arranged without Owen's permission by his son, Henry, though Owen later honoured the agreement with Fitzwilliam.[3] In the 1520s Fitzwilliam was rising to prominence, becoming a Justice of the Peace in Kent and Middlesex and by the time of his death he had acquired 16,000 acres across three counties with an annual income of over £1,000.[4] By the late 1520s parts of the house were habitable as Owen was permitted to spend his remaining years there and Fitzwilliam moved in on the previous owner's death. The building work was finished under Fitzwilliam. After his death in 1542, Cowdray House and its lands passed to his half-brother, Sir Anthony Browne.[5] Four years earlier King Henry VIII had given Battle Abbey, also in Sussex, to Browne.[6] Possession of the house passed through Browne's descendants until the building was ravaged by fire in the 18th century.[5]

In 1533 Henry VIII granted representatives of Fitzwilliam a licence to crenellate Cowdray House. The licence allowed the holder to “impark 600 acres of land meadow, pasture and wood, in Essborne and Midhurst, Sussex, to be called the park of Cowdry, to have free warren and fishery within the same, and to build fortifications therein”.[7] Despite the wording of the licence, Cowdray House was not built as a fortification,though it features architectural elements found in castles, such as battlements around the tops of walls - but often without a walkway behind them.[8]

FitzWilliam and Browne were both close advisers of Henry VIII, and FitzWilliam was given the title Earl of Southampton in 1537. The brothers' links with royalty meant that Henry VIII visited Cowdray in 1538, 1539, and in 1545. King Edward VI, Henry's son, also stayed at Cowdray during his reign (1552). Nearly forty years later, in 1591, Queen Elizabeth I was entertained at Coudray House by then owner Anthony Browne, the first Viscount Montague and the son of the Anthony Browne who was granted a licence to crenellate by Henry VIII.[9] During the English Civil War Francis Browne, 3rd Viscount Montague, supported King Charles I against Parliament. In 1643 Cowdray House was seized by Parliamentarians and much of its contents looted, though the house was returned to Browne after the war.[10]

The fire of 1793 and later history 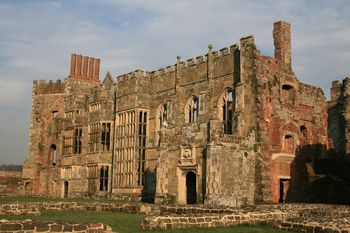 (CC [3]) Photo: Ivanka Majic
The east range housed the Great Hall. The porch through which the hall was entered is just to the right of the centre of the photograph.

In 1793 George Samuel Browne, 8th Viscount Montague, was betrothed and Cowdray House was preparing for the marriage. While the Viscount was abroad in Switzerland a fire broke out. The few servants at the house on the night of 24th September were unable to extinguish the fire, which had begun in the north gallery but quickly spread. Only the kitchen escaped the fire because its thick walls prevented it spreading.[11]

At the time of the fire Cowdray House was being refurbished, and much of the Viscount Montague's art collection was locked in storage and could not be saved. A contemporary, Richard Gough, remarked that the loss was of a national importance.[3] The Montagues' artwork collection had been replenished after the Civil War, and amongst the items lost during the fire were pieces by Raphael, Peter Paul Rubens, and Anthony van Dyck.[12] Paintings created by Swiss artist Samuel Grimm in the 18th century offer a valuable record of how the interior would have appeared shortly before it was destroyed by fire.[13]

A few days after the fire Browne drowned in the River Rhine. The Viscount had no brothers and left no male heir, so his title passed to a distant relative in France who also died without heirs. The family estates however passed to Browne's sister. In 1843 her daughters sold Cowdray House to the Earl of Egmont.[11] Cowdray House was not repaired and the ruins were allowed to decay and become overgrown until the early 20th century.[3] The ruins, however, became fashionable in the 19th century as the public and antiquarians became obsessed with romantic ruins such as Cowdray. J. M. W. Turner, a particularly prominent artist in romanticism, drew pictures of the remains of Cowdray House. In the 1860s a railway was built through Midhurst, and Cowdray House became a popular tourist attraction.[14] It was probably during this period that the story of the "Cowdray curse" was created. According to the story one of the monks removed from Battle Abbey in 1539 cursed Sir Anthony Browne, the new owner, saying "by fire and by water, thy line shall come to an end".[15]

Sir Weetman Dickinson bought Cowdray house from the Earl of Egremont in 1908 and five years later employed Sir William St John Hope to repair the ruins. Under Hope's supervision parts of the foundations were uncovered. He also compiled a comprehensive history of the building which was published in 1919.[3] Dickinson became the first Viscount Cowdray and the building has passed through his descendants to the present day. Further repairs were carried out between 1985 and 1992 and in 1996 the Cowdray Heritage Trust was formed. The charity, created to better inform visitors, leases the house from Viscount Cowdray and in 2009 they published a guidebook.[16]

Surrounding Cowdray House is a 600 acre park. The house, which sits in the south west corner, was approached by a 400 metre causeway leading from the town of Midhurst with trees carefully arranged on either side.[19] The grounds include a stable block and a lodge keeper's cottage, neither of which were reached by the fire. The stable block had even been reused as Cowdray House's visitor centre.[20] 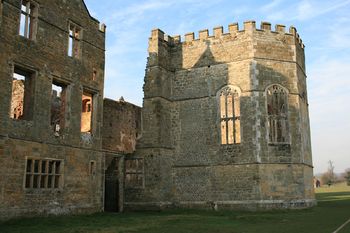 Cowdray House was arranged on a roughly square plan, measuring about 70m by 70m (230ft by 230ft) externally. At the centre was a courtyard measuring 38m by 32m, with a fountain at the centre.[21] The 3m high bronze fountain is now part of the collection of the Victoria and Albert Museum, and the artwork may have been created by Italian sculptor Benedetto da Rovezzano. The main entrance was through a three-storey gatehouse, with a wide archway between two towers crested by battlements. The arms of Sir Anthony Browne were added above the door in 1555. Whereas Cowdray is mostly built from local stone, stone was shipped from France to highlight the edges of the gatehouse towers. The gatehouse is one of the better survivals at Cowdray, but still lacks floors, a room, and the lead domes which once stood on top of the towers.[22]

The north and south ranges were almost completely destroyed by fire, and only the foundations – which were excavated in the early 20th century and left uncovered – remain. Depiction by Samuel Grimm from before the fire indicates how the ranges would have appeared, whilst the contents recorded in inventories offer clues as to the use of the rooms. The north range consisted of two storeys while the south range had three.[23]

The Great Hall in the east range was entered via a porch which survives mostly intact. Above the doorway the coat of arms of King Henry VIII was added to commemorate his visits to Cowdray House between 1539 and 1545. The hall was named the Buck Hall because of the eleven life-sized carvings of bucks the lined the walls. The hall measured 18.3m by 8.5m (60ft by 28ft) and was 18.3m high at its tallest point. It was one of the finest Great Halls of the Tudor period, comparable with that at Hampton Court Palace though was not as large. In contrast with bare the walls of the current ruins, the hall would have been brightly decorated with rich paintings, stained glass windows depicting the arms of Sir Anthony Browne, as well as the carvings which gave the hall its name.[24] A chapel was built against the east face of the Great Hall. The chapel measured 15.2m by 7.3m (50ft by 24ft) with the altar at the east end.[25]