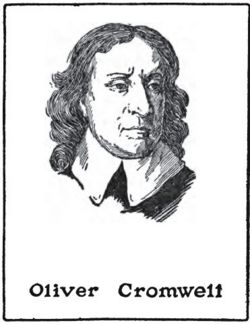 Oliver Cromwell a leader of the Parliamentarians in their victory in the English Civil War.

The English Civil War of 1642-1651 saw the country divided between the supporters of Parliament and those loyal to King Charles I. The term "civil war" is normally thought to cover the period of the First and Second Civil Wars, 1642—1648, but fighting did not wholly cease until the defeat of a Scots invasion in 1651. This attracted little English support, and ended with the Battle of Worcester on 3rd September 1651. Parliamentary forces are still referred to as the 'Roundheads', while the Royalists to this day are known as 'Cavaliers'. The war divided many families and disrupted friendships.

From 1649 to 1660 the monarchy was abolished and replaced by the Commonwealth of England. In 1653, the rule by Parliament and Council was abolished, and an Instrument of Government created a Commonwealth of England, Scotland and Ireland with a Lord Protector as "chief magistrate". Cromwell became the Lord Protector and was followed by his son Richard. The transition back to monarchical rule, facilitated by the recall of the Long Parliament (1659), was largely peaceful.

The start of the Civil War could be given various dates. It could be 4 January 1642, when Charles I, having changed the garrison of the Tower of London and changed the guards for Parliament, went personally to the House of Commons and attempted to seize five of its leading members by force, a major assault on Parliament's privileges. Or it could be 29 April of the same year, when Charles, having tried to whip up support in the north of England, attempted to seize Kingston-upon-Hull and its arsenal, and was refused entry by its governor, Sir John Hotham. It could be 15 July, when the first blood was shed in Manchester. Conventionally, however, it is dated to 21 August 1642 when the king "raised his standard" at Nottingham - though both sides had been raising troops before then.

The Earl of Essex was appointed Lord General of the Parliamentary army. The royalist forces had no centralised command apart from the king himself and his advisers, who included his nephew Prince Rupert and the Earl of Lindsey. The principal regional commanders were the Marquis of Newcastle in the north and Sir Ralph Hopton in the south-west.

Support for the two factions was strongly regionalised. The south-west (with the exception of Plymouth), Wales, and the north-west were royalist. East Anglia, the south-east, and, decisively, the City of London were for parliament. The midlands and the north-east, where great magnates clashed and some corporations were parliamentarian, were areas of conflict.

Parliament and its supporters were divided into two camps: those who thought it necessary to win the war outright, and those, including senior commanders, who just wanted to come to an arrangement with the king. By the autumn of 1643, two-thirds of England and Wales were under the king's control; in spite of minor successes achieved at Grantham, Gainsborough, and Winceby, where Cromwell served his apprenticeship in the art of war, the prognosis was poor for Parliament's army. In desperation the Parliamentary leaders came to terms with the Scottish leaders, and a Scottish army entered England in 1644. At the end of this year, Parliament agreed to the creation of the New Model Army under . In April 1645 the win-the-war party obtained the Self-Denying Ordinance, removing members of both houses of parliament from senior military commands, and Sir Thomas Fairfax was appointed as the new Lord General. The ordinance did not forbid re-appointments, and Cromwell was appointed lieutenant-general of the horse on a temporary basis, later made permanent. 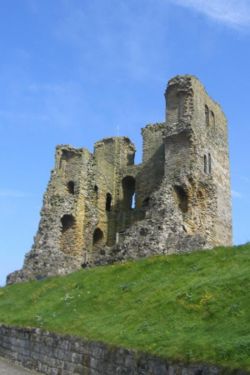 The entire west wall, roof and interior floors of Scarborough Castle's keep, as viewed from the barbican gateway, were destroyed in 1645 by artillery bombardment during the English Civil War.

At the Battle of Marston Moor in Yorkshire on 2nd July 1645, where the King's army, led by Prince Rupert, was heavily outnumbered and defeated. Next year, fighting without the Scots, these two leading generals again defeated the royal army at the Battle of Naseby on 14th June 1645. King Charles allowed his stronghold of Oxford to capitulate in June 1646, and himself fled to seek the mercy of the Scottish army.

Second Civil War and execution of Charles I

The second civil war broke out when, at the end of 1647, Charles reached an agreement with the Scots to support him, and in 1648 the king's English supporters also rose in various parts of the country.

While Sir Thomas Fairfax dealt with Royalist risings in south-east England, Cromwell first suppressed a rebellion in Wales, and then marched north to meet the Scots. He won a series of decisive victories over the larger Scottish army, in Lancashire (August 1648), marking his first major success as an independent commander. While the Presbyterians in Parliament still hoped to reach agreement with Charles I, Cromwell's son-in-law Henry Ireton led a movement to punish the king and overthrow the old monarchy. In December 1648, the southern army "purged" the Commons of its Presbyterian members and demanded the trial of the king.

During the autumn, Cromwell had followed his retreating enemy into Scotland, and restored order in Edinburgh, but he had lingered in the north until General Fairfax recalled him to London. When he got back to the capital he approved of the purge, and took charge of the arrangements to bring Charles I to his trial under guard. Fairfax having washed his hands of all political matters, Cromwell accepted the responsibilities of leadership. He realized that the trial of the King would result in the latter's death, as a result of all the blood shed in the civil wars. Once he made up his mind, Cromwell acted ruthlessly, and it was largely by his personal efforts that the trial by what was in effect a revolutionary tribunal was pressed through, and the King was condemned to death.

On 30th January 1649, King Charles I was beheaded on a block in view of a silent crowd gathered in front of the Banquet Hall of Whitehall Palace; the king's noble death proved a rallying point for his supporters. After the execution of Charles I, England became a republic until 1660.