Chubu (中部地方 Chuubu-chihoo) is a region of Japan located on Honshu island. It consists of nine administrative areas (prefectures), is home to the city of Nagoya, among others, and is also the place where Japan's highest mountain, Mount Fuji (富士山 Fuji-san) can be found. 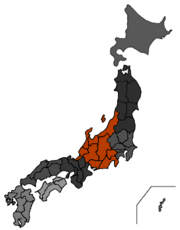 The exact borders of Chubu are a matter of some controversy. Eight prefectures are indisputably within Chubu: Aichi, Gifu, Ishikawa, Nagano, Niigata, Shizuoka, Toyama and Yamanashi. Fukui prefecture is also generally identified as part of Chubu, as is sometimes Mie.[1]

The total population of the Chubu region was 21,798,000 in 2006.[2] The area forms part of an urban corridor running north-eastwards towards Tokyo from Kansai towards the Kanto region; this makes Chubu part of one of the most densely-populated areas of the world, home to over half the country's population.[3]