Bacterial cell structure is responsible for many of their unique biological properties of bacteria. Many structural features are unique to bacteria and are not found among archaea or eukaryotes. Because of the simplicity of bacteria relative to larger organisms and the ease with which they can be manipulated experimentally, the cell structure of bacteria has been well studied, revealing many biochemical principles that have been subsequently applied to other organisms.

Perhaps the most elemental structural property of bacteria is cell morphology (shape). Typical examples include:

Cell shape is generally characteristic of a given bacterial species, but can vary depending on growth conditions. Some bacteria have complex life cycles involving the production of stalks and appendages (e.g. Caulobacter) and some produce elaborate structures bearing reproductive spores (e.g. Myxococcus, Streptomyces). Bacteria generally form distinctive cell morphologies when examined by light microscopy and distinct colony morphologies when grown on petri plates. These are often the first characteristics observed by a microbiologist to determine the identity of an unknown bacterial culture.

Elongated shapes such as rods and filaments improve nutrient uptake by increasing the surface area to volume ratio. The cell division process influences cell shape. For instance the cresent shaped bacterium Caulobacter crescentus routinely divides so that its two daughter have different shapes, one of which has the thin stalk (prostheca) for attachment to surfaces and the other being a motile cell. Differention of the cell to produce endospores spores can distend the cell as in Clostridium species, and other forms of cell differentiation for performance of specialized functions can cause cell shape to alter. An example of the latter is the filamentous cyanobacterium Anabaena which forms occasional cells known as heterocysts which provide the necessary anaerobic environment to allow nitrogen fixation [1].

The importance of cell size

Perhaps the most obvious structural characteristic of bacteria is (with some exceptions) their small size. For example, Escherichia coli, an "average" sized bacterium with average cell length of ca. 1 µm has a cell volume of approximately 1 - 2 μm3. This corresponds to a wet mass of ca. 1 pg, assuming that the cell consists mostly of water. The dry mass of a single cell can be estimated as 20 % of the wet mass, amounting to 0.2 pg. About half of the dry mass of a bacterial cell consists of carbon, and also about half of it can be attributed to proteins. Therefore, a typical fully grown 1-liter culture of Escherichia coli (at an optical density of 1.0, corresponding to ca. 109 cells/ml) yields ca. 1 g wet cell mass.

The smallest bacteria include a subgroup of marine Alphaproteobacteria which comprise up to 25 percent of the ocean's microbes. Of these Pelagibacter ubique has the smallest genome, with a small number of very compactly organised genes [2]. It's newly divided cells measure 0.2 µm by 0.4 µm, with an estimated cell volume of approx. 0.01 μm3 [3]

At the other end of the scale of bacterial volumes sits the giant sturgeon-fish symbiont Epulopiscium fishelsoni, which averages a cell volume of 300,000 μm3 but can be up to 3 million μm3 in some individuals [4].

Small size is extremely important because it allows for a large surface area-to-volume ratio which allows for rapid uptake and intracellular distribution of nutrients and excretion of wastes. At low surface area-to-volume ratios the diffusion of nutrients and waste products across the bacterial cell membrane limits the rate at which microbial metabolism can occur, making the cell less evolutionarily fit.

Reasons for the existence of large cells are starting to be understood. The giant sediment dwelling sulfur-oxidizing bacterium Thiomargarita namibiensis stores nitrate in a large central vacuole [5]. In other species of bacteria, a long filamentous shape may protect cells from being engulfed by predators.

The bacterial cytoplasmic membrane is composed of a phospholipid bilayer and thus has all of the general functions of a cell membrane such acting as a permeability barrier for most molecules and serving as the location for the transport of molecules into the cell. In addition to these functions, prokaryotic membranes also function in energy conservation as the location about which a proton motive force is generated. Unlike eukaryotes, bacterial membranes (with some exceptions e.g. Mycoplasma and methanotrophs) generally do not contain sterols. However, many microbes do contain structurally related compounds called hopanoids which likely fulfill the same function. Unlike eukaryotes, bacteria can have a wide variety of fatty acids within their membranes. Along with typical saturated and unsaturated fatty acids, bacteria can contain fatty acids with additional methyl, hydroxy or even cyclic groups. The relative proportions of these fatty acids can be modulated by the bacterium to maintain the optimum fluidity of the membrane (e.g. following temperature change).

Fimbrae are protein tubes that extend out from the outer membrane in many members of the Proteobacteria. They are generally short in length and present in high numbers about the entire bacterial cell surface. Fimbrae usually function to facilitate the attachment of a bacterium to a surface (e.g. to form a biofilm) or to other cells (e.g. animal cells during pathogenesis)). A few organisms (e.g. Myxococcus) use fimbrae for motility to facilitate the assembly of multicellular structures such as fruiting bodies. Pili are similar in structure to fimbrae but are much longer and present on the bacterial cell numbers in low numbers. Pili are involved in the process of bacterial conjugation. Non-sex pili also aid bacteria in gripping surfaces.

An S-layer is a cell surface protein layer found in many different bacteria and in some archaea where it serves as the cell wall. All S-layers are made up of a two-dimensional array of proteins and have a crystalline appearance, the symmetry of which differs between species. The exact function of S-layers is unknown, but it has been suggested that they act as a partial permeability barrier for large substrates. For example, an S-layer could conceivably keep extracellular proteins near the cell membrane by preventing their diffusion away from the cell. In some pathogenic species, an S-layer may help to facilitate survival within the host by conferring protection against host defence mechanisms.

Many bacteria secrete extracellular polymers outside of their cell walls. These polymers are usually composed of polysaccharides and sometimes protein. Capsules are relatively impermeable structures that cannot be stained with dyes such as India ink. They are generally involved in attachment of bacteria to other cells or inanimate surfaces to form biofilms. Slime layers are somewhat looser structures that help protect bacteria from phagocytosis and desiccation. 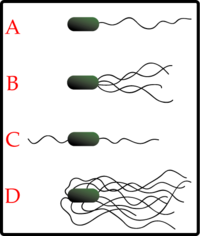 Flagella are complex structures that are composed of many different proteins. These include flagellin, which makes up the whip-like tube and a protein complex that spans the cell wall and cell membrane to form a motor that causes the flagellum to rotate. This rotation is normally driven by proton motive force. 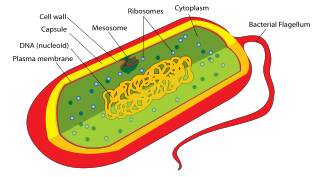 The bacterial chromosome and plasmids

Unlike eukaryotes, the bacterial chromosome is not enclosed inside of a membrane-bound nucleus but instead resides inside the bacterial cytoplasm. This means that the transfer of cellular information through the processes of translation, transcription and DNA replication all occur within the same compartment and can interact with other cytoplasmic structures, most notably ribosomes. The bacterial chromosome is not packaged using histones to form chromatin as in eukaryotes but instead exists as a highly compact supercoiled structure, the precise nature of which remains unclear. Most bacterial chromosomes are circular although some examples of linear chromosomes exist (e.g. Borrelia burgdorferi). Along with chromosomal DNA, most bacteria also contain small independent pieces of DNA called plasmids that often encode for traits that are advantageous but not essential to their bacterial host. Plasmids can be easily gained or lost by a bacterium and can be transferred between bacteria as a form of horizontal gene transfer.

Ribosomes and other multiprotein complexes

In most bacteria the most numerous intracellular structure is the ribosome, the site of protein synthesis in all living organisms. All prokaryotes have 70S (where S=Svedberg units) ribosomes while eukaryotes contain larger 80S ribosomes in their cytosol. The 70S ribosome is made up of a 50S and 30S subunits. The 50S subunit contains the 23S and 5S rRNA while the 30S subunit contains the 16S rRNA. These rRNA molecules differ in size in eukaryotes and are complexed with a large number of ribosomal proteins, the number and type of which can vary slightly between organisms. While the ribosome is the most commonly observed intracellular multiprotein complex in bacteria other large complexes do occur and can sometimes be seen using microscopy.

Most bacterial habitats do not live in environments that contain large amounts of essential nutrients at all times. To accommodate these transient levels of nutrients bacteria contain several different methods of nutrient storage in times of plenty for use in times of want. For example, many bacteria store excess carbon in the form of polyhydroxyalkanoates or glycogen. Some microbes store soluble nutrients such as nitrate in vacuoles. Sulfur is most often stored as elemental (S0) granules which can be deposited either intra- or extracellularly. Sulfur granules are especially common in bacteria that use hydrogen sulfide as an electron source. Most of the above mentioned examples can be viewed using a microscope and are surrounded a thin nonunit membrane to separate them from the cytoplasm.

Gas vesicles are spindle-shaped structures found in some planktonic bacteria that provides buoyancy to these cells by decreasing their overall cell density. They are made up of a protein coat that is very impermeable to solvents such as water but permeable to most gases. By adjusting the amount of gas present in their gas vesicles bacteria can increase or decrease their overall cell density and thereby move up or down within the water column to maintain their position in an environment optimal for growth.

Carboxysomes are intracellular structures found in many autotrophic bacteria such as Cyanobacteria, Knallgasbacteria, Nitroso- and Nitrobacteria. They are proteinaceous structures resembling phage heads in their morphology and contain the enzymes of carbon dioxide fixation in these organisms (especially ribulose bisphosphate carboxylase/oxygenase, RuBisCO, and carbonic anhydrase). It is thought that the high local concentration of the enzymes along with the fast conversion of bicarbonate to carbon dioxide by carbonic anhydrase allows faster and more efficient carbon dioxide fixation than possible inside the cytoplasm.

Similar structures are known to harbor the coenzyme B12-containing glycerol dehydratase, the key enzyme of glycerol fermentation to 1,3-propanediol, in some Enterobacteriaceae (e. g. Salmonella).

Magnetosomes are intracellular structures found in magnetotactic bacteria that allow them to sense and align themselves along a magnetic field (magnetotaxis). The ecological role of magnetotaxis is unknown but is it hypothesized to be involved in the determination of optimal oxygen concentrations. Magnetosomes are composed of the mineral magnetite and are surrounded by a nonunit membrane. The morphology of magnetosomes is species-specific.

Perhaps the most well known bacterial adaptation to stress is the formation of endospores. Endospores are bacterial survival structures that are highly resistant to many different types of chemical and environmental stresses and therefore enable the survival of bacteria in environments that would be lethal for these cells in their normal vegetative form. It has been proposed that endospore formation has allowed for the survival of some bacteria for hundreds of millions of years (e.g. in salt crystals)[6][7] although these publications have been questioned.[8][9] Endospore formation is limited to several genera of Gram-positive bacteria such as Bacillus and Clostridium. It differs from reproductive spores in that only one spore is formed per cell resulting in no net gain in cell number upon endospore germination. The location of an endospore within a cell is species-specific and can be used to determine the identity of a bacterium.