Borrelia burgdorferi are Gram-negative spirochetes found primarily in North America and Europe. It is a double membraned, motile, spiral shaped microorganism that inhabits the gut of deer ticks (Ixodes scapularis).[1] It is named after American scientist Willy Burgdorfer who in 1982 isolated and determined the bacterium to be the causative agent of Lyme disease.[2] Lyme disease is the most common tick-borne disease in the US.[3][1]

B. Burgdorferi is one of the first organisms to have its genome sequenced; it followed Haemophilus influenzae and Mycoplasma genitalium in 1995. [4] It was found to have a very small, but complex genome that contains linear chromosomal DNA and up to as many as 20 plasmids. A study in 1997 found the linear DNA to be composed of 910,725 base pairs with a G+C content of 28.6%. In addition to that, the plasmids contributed 533,000 more base pairs to the organism's genome. [5]

The organism's small genome lacks the genes that are necessary for the synthesis of amino acids, fatty acids, enzyme cofactors, and nucleotides. [5] In order for them to be cultured, a very special type of medium called Barbour-Stoenner-Kelly (BSK) medium is used. [6] It contains serum-supplemented mammalian tissue-culture that enables the bacterium to reproduce without ever having the need to synthesize too many biological compounds.

The sequencing showed 853 open reading frames, with an average size of 992 base pairs. 93% of the genome represents coding sequence, and 59% were assigned biological roles. Most of the chromosomal genes code for a basic set of proteins that are required for DNA replication, transcription, translation, solute transport and energy metabolism.[5][7][8] 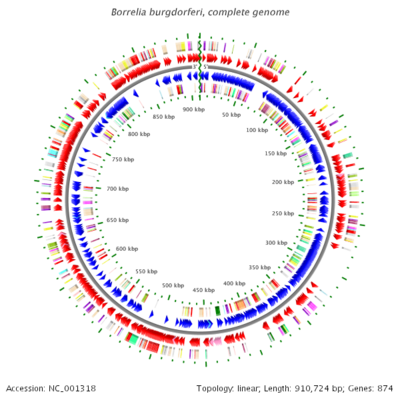 This image shows a recent mapping of B. burgdorferi genome. Click to enlarge.

B. burgdorferi are long Gram-negative spirochetes, although some researchers however claim that the organism does not exhibit properties of either Gram-positive or Gram-negative bacteria since they do not exhibit defining Gram-negative characteristics. Stained cells are visible by dark-field or phase-contrast microscopy, but not visible by bright field microscopy. They are flexible helical cells and are much longer than they are wide. They usually have a length of 20-30 μm but a width of only 0.2-0.3 μm. The organism is motile with both rotational and translational movements, and the coiling of cells is regular. On the average, seven periplasmic flagella are located at each cell end, and these flagella overlap at the central region of the cell. There are multiple layers of membrane that surround the protoplasmic layer, cytoplasmic membrane, and the enclosed cytoplasmic contents.[1]

B. Burgdorferi are classified as being chemoorganotropic, and derive energy by metabolizing organic molecules.[1] The organism is microaerophilic; they require oxygen to survive, but only at low concentrations. Too much or lack of oxygen can be harmful to them. They cannot synthesize their own amino acids, fatty acids, enzyme cofactors, and nucleotides. They also happen to be catalase negative; they are unable to break down hydrogen peroxide. It is possible to cultivate the organism in vitro, but it requires a very complex growth medium since it lacks the ability to synthesize various necessary compound (see genome structure).[9] The medium used to grow Borrelia burgdorferi is called Barbour-Stoenner-Kelly (BSK) medium. It contains over thirteen ingredients in a rabbit serum base.[10]

The optimal growth temperature is 34° to 37°C, and the organism has a generation time of 11 to 12 hours at 35°C.[9][1] Their life cycle is directly linked to their host, and they depend on arthropod vectors (ticks) to infect mammals. They reside in infected mammals as well as in the gut of ticks.[3] They multiply when there is enough blood ingested by the tick to support bacterial growth. 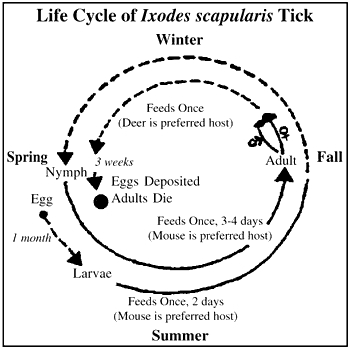 The vector tick, Ixodes scapularis, undergoes a two year life cycle beginning when the female drops from her animal host to lay eggs in the soil during the spring. Very small larvae emerge during the summer and attach to a passing small animal (such as mouse) to feed on its blood. If the small animal is infected with the spirochete, the larve become infected as they feed. Fed larvae drop back to the ground and molt into nymphs. Nymphs wait until next year's warm weather to search for another host to feed on before becoming adult ticks. They prefer the white-footed mouse, but will take any warm-blooded host that happens along. At this point, the infected nymphs can infect new animal hosts (including human). The fed nymph falls back to earth to molt, and emerge as an adult tick. The adult has one more blood feeding before it mates by late spring, and infected nymphs carry the infection into adulthood. Male ticks die following mating, while female ticks die after laying eggs, thus, completing the life cycle. [11] 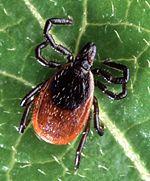 This image shows the relative sizes of male, female, nymph, and larval ticks (Ixodes scapularis). Nymphs are the best candidates for transmission, since they are relatively small and much harder to detect.

Borrelia Burgdorferi causes Lyme disease, and is transmitted to humans and other mammals by deer ticks(Ixodes scapularis). Lyme is a multisystem inflammatory disease that affects the skin in the early stage and then spreads to the joints, nervous system and may eventually affect the organ systems. The bite of an infected nymph or adult tick can only transmit Lyme disease after it attaches to the host for thirty six to forty eight hours. This is due to the initial lag time, and the generation time of B. Burgdorferi, which happens to be 12 hours (see ecology). Spirochetes waiting in the mid-gut of the tick only begin to multiply as the tick starts its blood meal. Then they migrate to the salivary glands where they are discharged into the host with the tick's saliva. It takes several hours before a large enough infectious dose of spirochetes can penetrate the new host. [12]

Most incidences of Lyme disease occur from May through September because the nymphal stage of the tick is responsible for most cases. They are too small to be easily detectable, and their bites cause much milder pain than an adult tick.[13] The symptoms are divided into three stages, each stage being more advanced than the previous. Initial sign and sympotoms of Lyme disease include an appearance of a rash, which has the appearance of being solid red or bull’s eye rash with flu like symptoms.[13] These symptoms may appear up to a month after infection. Within weeks of these initial stage one symptoms however, the bacterium may spread to various other parts of the body through the bloodstream. At this point, the disease can progress to stage two, and infected individuals may start having acute neurological problems such as Bell's Palsy. 15% of untreated patients progress to this stage. [14] Meningitis as well as mild Encephalitis is also common at this stage, leading to memory loss, sleep disturbances, or changes in mood or affect. The third and the most severe stage may occur months to years after initial infection.[13] Symptoms at this stage are primarily rheumatologic and neurologic, and mostly untreatable.

Researchers are currently attempting to uncover what exactly it is that makes the bacterium pathogenic to humans. Much of the research is directed to the genetics and certain proteins of B. burgdorferi that seem to contribute to its pathogenesis.

One of the proposed idea involves a subset of the genetically distinct lineages found in every B. burgdorferi population where the newly transmitted parasites are selected for best utilizing its new ecological niche. This idea is still debated, as it implies the possibility of multiple mechanism of infection. [15] In a paper titled "The Propensity of Different Borrelia burgdorferi sensu stricto Genotypes to Cause Disseminated Infections in Humans,"[15] researchers challenged the idea that only certain genotypes of B. burgdorferi cause pathogenesis in humans or other mammals. Their results indicate that all genotypes of the bacterium have the potential to become pathogenic in humans, but some are much more likely than others to do so.