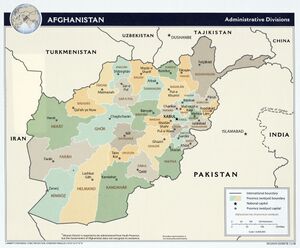 The Islamic Republic of Afghanistan is a country in Central Asia. Its capital is Kabul. The current president and head of state has been Ashraf Ghanie since 29th September 2014e. Afghanistan is completely landlocked, sharing borders with six other countries. To the west is Iran. In the north lie Turkmenistan, Uzbekistan, and Tajikistan. In the east, there is a short border with China and a long southeastern one with Pakistan.[1] Much of the land is high and mountainous. The central area, know as the Hindu Kush, is a western spur of the Himalaya range. The south consists of high plateaux and sandy deserts. The northern plains are lower in elevation and more fertile, providing much of the country's agriculture.

The country has been ravaged by invasions and civil wars for centuries.

Most recently, the 9-11 attacks triggered the Afghanistan War (2001-), removing the Taliban from power and attempting to destroy al-Qaeda, which had been blamed for 9/11. A new interim government was set up in 2002 led by Hamid Karzai. A new constitution was ratified and elections were held in 2004 making Karzai president. The year 2005 saw the election of a legislature. This has brought some stability to much of the country and so the economy is now beginning to grow.

However, guerilla warfare continues in many areas.

Shortly after the defeat of the Taliban at the hands of Coalition forces, a UN-led committee drafted a road map for the Afghanistan government. Then, an Afghan Grand Alliance elected a provisional government, which, in turn, framed a Constitution. The election of Karzai in 2004 and the legislature in 2005 completed the transition to a democratically elected government.

A new 2009 Afghanistan presidential election was held in August 2009. No candidate received a first-ballot win, but Abdullah Abdullah declined to participate in a runoff with Karzai, claiming electoral fraud. Karzai, therefore, won by default.

The President, two Vice Presidents and Cabinet ministers form the executive branch of the Afghan government. The current president is Ashraf Ghanie.

Hamid Karzai was elected for a five year term of office in October 2004. Until that time, Karzai served as interim president.

The president appoints the cabinet ministers who are then approved by the National Assembly.

This parliament forms the legislative arm of the government. It consists of two houses. The lower house, know as the Wolesi Jirga (the House of People), is directly elected in a general secret ballot of voters. The Meshrano Jirga (House of Elders) is the upper house and is partly indirectly elected and partly appointed. Each of the provincial councils elects a representative to the Meshrano Jirga for a four year term. The district councils also elect a representative each for a three year term. The remaining seats in the house are filled by appointment of the President of which he must appoint two representatives of the disabled or impaired, two from the Kochis (Nomadic people). The constitution also stipulates that of all the appointed representatives, at least 50% must be women. The appointed members sit for a period of five years.

Know as the Loya Jirga, this body is the traditional highest level of government. It is only convened on exceptional circumstances such as issues of national sovereignty, territorial disputes or to remove the president form power. The Loya Jirga also has the power to amend the constitution. The Loya Jirga is made up form the members of the National Assembly plus the Chairperson of each of the Provincial and District councils. The cabinet ministers, Chief Justice and members of the Supreme Court may take part in the Assembly proceedings but do not have voting rights.

Afghanistan is subdivided into 34 provinces. These are further subdivided into 398 districts. Each province and district elects a council. The city of Kabul has a mayor, directly appointed by the president. The city is administered independent form its surrounding province.

Most of Afghanistan's 652,290 square kilometre area is high and mountainous. The Hindu Kush mountains stretch across the centre of the country from east to west, creating the Panjshir Valley. This mountain range is an offshoot of the main Himalaya range. Cutting the country north to south is the Pamir range. The highest mountain, Nowshak, is 7,485 metres high and straddles the border with Pakistan. These mountain ranges are formed by the collision of the Indian and Eurasian plates-- a process that has been happening for the last 50 million years or so, creating some of the highest mountains on Earth. The plates are still moving and so Afghanistan is frequently disturbed by earthquakes. Most quakes are relatively small or occur in sparsely populated areas, but occasionally they are devastating.

Aghanistan is home to the rivers Amu Darya river (formerly known as the Oxus), Helmand river, Harirud river and Kabul river. Only the Kabul ever reaches the sea (via the Indus river system in Pakistan). The others all evaporate and run dry within central Asia. The Amu Darya forms much of the northern border line between Turkmenistan, Uzbekistan and Tajikistan. On these rivers, three major dams were constructed during the 1950's and 60's; the Arghandab upstream from Kandahar was built in 1952; in 1953 a the Kajakai dam was build on the Helmand River; and the Naglu dam was build west of Jalalabad on the Kabul River in the 1960's. These dams still exist even after the years of war, but looting and lack of maintenance means that they no longer function at full capacity.

South of the Hindu Kush range, the Shomali Plain is north of the capital, and a high plateau extends into northern Pakistan. North of the mountains, lower plains stretch down to the Amu Darya river. It is within these northern plains that most of the country's agriculture is based.

There is some mineral wealth in Afghanistan with sources of uranium, copper, gold, iron, and chrome. Oil and gas reserves have also been identified. These resources are largely undeveloped.

Most of the land is typical arid or semiarid steppe, hot dry summers with very cold dry winters. The northern Turkestan Plains, which extend from the northern foothills of the Hindu Kush become hotter and more arid as they descend northwards towards the Amu Darya river. Sistan Basin, in the south west, has summer dust storms and winter blizzards. This area is known for its strong winds (known as the 120 day winds) and fast-moving sand dunes. The mountains of the Northeast have a subarctic climate. The plateaus between the mountains are relatively sheltered and experience only light winds.

In the high lands near the Pakistani border, during the months of July, August and September, the country experiences some fringe effects of the Asian monsoon. Occasionally, this weather system, which comes from the Southeast, will move further into the country. This high humidity weather can lead to some rain. This area also receives heavy snow fall in winter; sometimes as deep as 2 metres; blocking the mountain passes.

The mountainous terrain, high plateaus and arid deserts of Afghanistan are generally unfavorable to agriculture. Only 12% of the total land is used in agriculture. Most farming is done within the lower plains of the North. Before the war, Afghanistan was largely self sufficient in wheat. Crops included corn, rice, barley, wheat, vegetables, cotton, fruits and nuts. Livestock are reared in a nomadic or aemi-nomadic manor. Since the war, much of the farmland has be turned over to the production of opium poppies. Three quarters of the worlds opium supply comes from within Afghanistan and the United Kingdom government claim that over 90% of the heroin used in the UK originates in Afghanistan. Opium accounts for more than 30% of Afghan GDP.[3]

During the 1960's, a project was undertaken to build a ring of roads within Afghanistan that would connect all the major cities. These paved roads were funded by the Soviet Union (in the North), the United States (in the South) and by Germany (within the province of Paktya). Tunnels were also constructed on some mountain passes. The Kotal-e Salang pass at 3,878 meters connects Kabul with the North. A Soviet-financed tunnel built through it in 1963, at an elevation of 3363 meters, reduced the travel time from several days to just a few hours. However, earthquakes, war and lack of maintenance has lead to the destruction of much of this road network. Other roads within Afghanistan are unpaved.[4]

There are short railway from Iran into Herat Province, and from Uzbekistan into Balkh Province.

During the Soviet occupation large military installations were built at Afghan airports such as the Bagram Airport.

Islam is the predominant religion in Afghanistan. A cloak worn by Muhammad is one of the country's Islamic relics. The cloak is kept within the Khalka Sarifa in the city of Kandahar; Mullah Muhammad Omar symbolically donned the cloak when claiming leadership of the country and the Taliban.

Most Muslims are Sunni, although there are Shi'a, especially among the Hazara. The Taliban are extreme Salafists, desiring not only Sharia law but the living conditions of the time of the Prophet.

Hindu and Sikhs have a minority presence, mainly within the cities of Jalalabad, Kabul, and Kandahar. Historically, Buddhism has had a presence within the country. The Buddhas of the Bamyan valley in the northwest of the country, were the largest statues of the Buddha in the world until they were destroyed by the Taliban in the year 2001. Another UNESCO listed world heritage site, the Minaret of Jam is also considered to be in a critical condition. The Minaret dates to the 12th century and is located in the Hari Rud area.

The official languages are Dari (related to Farsi) and Pashto. There are over 30 different local languages spoken throughout the country.[5]

The population of the country is almost entirely Islamic. They can be divided into 80% Shunni and 19% Shi'a.[6] The remaining 1% of the population are either Hindu or Sikhs. There are a small number of Christians.

The national sport is Bazkashi. This is a team game, played on horseback. It is similar in resemblance to polo. A popular sport with children is kite fighting. The strings of the kites are coated with a mixture of flower and powdered glass and the objective is to sever the strings of your competitor's kite.