The Aerotrain is a streamlined trainset introduced by General Motors' Electro-Motive Division in the mid-1950s. It utilized the experimental EMD LWT12 locomotive (essentially a standard EMD SW1200 switcher engine geared for high-speed passenger service and "wrapped in an aerodynamic shell"), coupled to a set of modified General Motors 40-seat intercity bus coach bodies. The cars each rode on two axles with an airbag suspension system, which was intended to give a smooth ride but in practice had the opposite effect. The Aerotrain was (in its day) one of the few trains that had ever been designed as a single unit, including the locomotive.

By 1952, American railroads were losing an estimated $700,000 in annual passenger service revenues to air and bus lines, as well as the increasing popularity of the automobile.[7][8] This development drove several railroad companies' attempts to effectively "reinvent" streamlining (considered to be a major revolution in American passenger train travel in the 1930s) in order to reduce equipment investment, operating, and maintenance costs.[9] To achieve these ends the center of gravity was lowered (when compared to state-of-the-art passenger rolling stock) which allowed the trains to operate at higher speeds over existing tracks. As an additional cost-saving measure, existing components were to be used wherever possible. It was hoped that these measures would allow the railroads to be competitive in the medium-distance (200-700 mile) market. 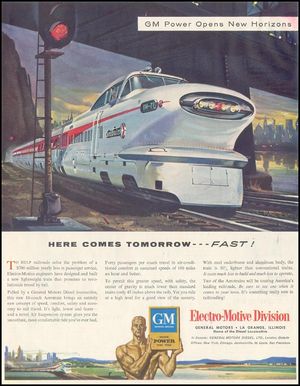 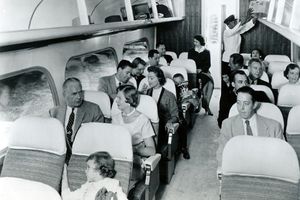 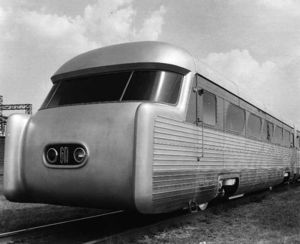 GM's Aerotrain, touted as the "lightweight with a heavyweight future," was the best-known of the postwar experimental streamliners.[4] Following closely on the heels of Pullman-Standard's super-lightweight, articulated "Talgo" train, EMD produced a total of 3 demonstrator units, designated Model LWT12 (for "lightweight, 1,200 horsepower"). The units' automobile styling cues were the work of GM's Special Projects Studio. The unique "turret-cab" car body design was included multiple headlights, a wrap-around windshield, and contrasting color sweep-spear side trim.[10] Modified intercity bus car bodies turned out at GM's Truck & Coach Division in Pontiac, Michigan were used as the basis for the passenger cars, which featured wrap-around back windows and prehensile tail fins on the observation cars.

The Aerotrain is not a luxury train, but a coach train designed as one approach to the solutions of the serious economic problem railroads face in their passenger train operations...the major objective of the Aerotrain is to provide the utmost in speed, safety, and comfort at the least possible cost.[13]

The two Aerotrain demonstrator sets, consisting of 1 locomotive (EMD serial numbers 21463 and 21464) and 10 cars each, logged over 600,000 miles (970,000 kilometers) on five different railroads.[15] In February, 1956 the Pennsylvania Railroad leased Aerotrain No. 1000 (or T1) and operated the Pennsy Aerotrain between New York City and Pittsburgh until June, then between Pittsburgh and Philadelphia through June of the following year. The Atchison, Topeka & Santa Fe Railway ran Aerotrain No. 1001 (or T2) on its "Surf Line" route between Los Angeles and San Diego as one of its San Diegans beginning in March 1956. Its use was soon discontinued because the trainset had to be turned after each trip and required helper locomotives on the Sorrento Grade north of San Diego. No. 1001 was then leased to the New York Central Railroad as a demonstrator and operated as the Great Lakes Aerotrain between Cleveland and Chicago on the former Lake Shore Limited route. In the summer of 1957 the train was operated by the Union Pacific Railroad as the City of Las Vegas running between Los Angeles and Las Vegas. By the end of 1957 both units had been sold to the Chicago, Rock Island and Pacific Railroad at a substantial discount, where the trains operated in Chicago commuter service until they were retired from service in 1966. GM's president, Harlow H. Curtice, summed up the endeavor as follows:

[The company] has no intention of going into the railroad passenger-car-building business. It is primarily interested in the promotion of the use of its diesel motive power and presents the new cars as a service to its customers.

Despite intentions to the contrary, even routine maintenance on the locomotive section was extremely difficult and time-consuming. And, rather than cushioning the ride, the air suspension system literally "beat passengers to death." Finally, the trains proved difficult to integrate into railroad operations. In the end, either the Aerotrain nor its postwar brethren succeeded in capturing the imagination of the American public.

Between June 26, 1957 and September 15, 1958 Disneyland operated two separate 2 ft 6 in (762 mm) gauge versions of the Aerotrain, known as the Viewliner. Billed as "the fastest miniature train in the world" the integral head-end units were driven by Oldsmobile "Rocket" V8 gasoline engines (Oldsmobile also furnished the windscreen, doors, and instrument console for each of the two 5,000-pound (2,270 kg) locomotives). The Washington Park and Zoo Railway has operated a ⅝-scale diesel-powered replica of the Aerotrain (dubbed the Zooliner) to transport zoo patrons along a one-mile route around the perimeter of the zoo grounds since 1958.