This article is about the major city. For other uses of the term Pittsburgh, please see Pittsburgh (disambiguation).

Pittsburgh, Pennsylvania, is the second largest city in Pennsylvania. It has a long history going back to the eighteenth century. 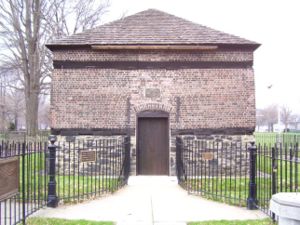 The Fort Pitt Blockhouse, dating to 1764, is the oldest structure in Pittsburgh.[1]

The site of Pittsburgh, Pennsylvania, is at the confluence of the Allegheny River and the Monongahela River that forms the Ohio River. The history of Pittsburgh began with a struggle between Native Americans, the French and the British over the control of this strategic juncture. Native Americans had populated this region for more than 10,000 years. In 1754, to enforce their territorial claims, the French built Fort Duquesne at the Ohio's head. This triggered the French and Indian War.[2] After British General John Forbes occupied Fort Duquesne, he ordered the construction of Fort Pitt. He named the settlement between the rivers "Pittsborough." During Pontiac's Rebellion, Ohio Valley and Great Lakes tribes besieged Fort Pitt for two months, but their siege was lifted.

Following the American Revolution, the village around the fort continued to grow. One of its earliest industries was building boats for settlers to enter the Ohio Country. The year 1794 saw the short-lived Whiskey Rebellion, when farmers rebelled against federal taxes on whiskey.

By 1815, Pittsburgh was producing significant quantities of iron, brass, tin and glass products. By the 1840s, Pittsburgh had grown to one of the largest cities west of the Allegheny Mountains. A great fire burned more than a thousand buildings in 1845, but the city rebuilt. By 1857, Pittsburgh had nearly 1,000 factories. The American Civil War boosted the city's economy still further, with increased production of iron and armaments. Production of steel began in 1875. By 1911, Pittsburgh was producing as much as half of the nation's steel. In the early 20th century, the city's population topped half a million, including many European immigrants. During World War II, Pittsburgh contributed more than 95 million tons of steel to the allied war effort.[3]

Following World War II, the city launched a clean air and civic revitalization project known as the "Renaissance." The industrial base continued to expand through the 1960s. In the 1980s, however, the steel industry imploded, with massive layoffs and mill closures. Pittsburgh shifted its economic base to higher education, services, tourism, medicine and high technology. During this transition, the city population shrank to 330,000.