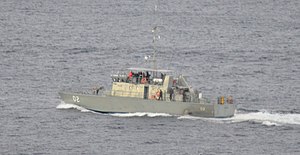 The Pacific Forum patrol vessels were designed shortly after the United Nations Convention on Law of the Seas (UNCLOS) extended exclusive economic zones off the shores of all nations with a maritime boundary. Australia agreed to help its smaller neighours in the Pacific Forum by giving them small patrol vessels, so they could police their own sovereignty.

Australia delivered a total or 22 patrol vessels to 12 of its neighbours. Deliveries took place between 1989 and 1993.

The vessels displaced about 160 tonnes. They were designed to be built from Commercial-off-the-shelf technology, not higher performance military standard equipment, in order to make it easier to maintain the vessels in small, isolated, poorly equipped shipyards.

The vessels were designed for a thirty year operational career. Reciepient countries agreed that they would return the vessels to Australia, so they could be safely recycled, when Australia gave them more modern replacment vessels. Replacement by Guardian-class patrol vessels began in 2019.

An Australian analysis concluded that its smaller nations struggled to keep the vessels operational, and they averaged about half as many days at sea as comparable sized Australian vessels.