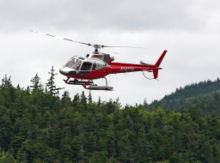 A helicopter is an aircraft which derives most of its lift from a rotating wing system known as a rotor. Helicopters usually get their horizontal thrust from the same wing system by directing the overall rotor thrust away from the vertical.

The rotor is the defining feature of a helicopter, and the complexity of a spinning wing system is a serious limitation on the thrust which can be applied and the forward speed of the aircraft. Although some types have more than one rotor, most rely on an anti-torque system to counteract the spinning motion which the power unit imparts on the body of the helicopter.

Their relatively poor performance is more than compensated by their versatility. One of the few types of aircraft which can hover and perform vertical takeoff and landing (VTOL), helicopters are used for transport where no runway is available - in mountains, on oil platforms, in cities, and in undeveloped parts of the world, as well as police, surveillance, medical evacuation and rescue work.

Most helicopters are powered by turbine engines to take advantage of their superior power-to-weight ratio, although these engines are expensive. Cheaper aircraft such as the very widespread Robinson R22 use piston engines which are heavier, but much cheaper to build.

One other major difference between a helicopter powered by a turbine engine and one powered by a piston engine is that the turbine powered helicopter is much simpler to control. The reason for this is that the power of the piston engine is virtually always controlled by a twist throttle located on the collective control. The collective control is controlled by the pilot's left arm and 'collectively' changes the pitch in all the rotor blades of the helicopter the same amount and in the same direction, hence the name. When the collective is 'increased', it increases the pitch in all of the rotor blades. This requires more power from the engine. In the piston engine, this requires the pilot to twist the throttle to supply the engine with more fuel and thus provide more power. Conversely, when the collective is 'decreased', it reduces pitch in all of the rotor blades and less power is required, which requires a reduction in fuel flow which requires the pilot to twist the throttle in the opposite direction. Thus, a movement of one control requires a simultaneous movement of a different control. When the helicopter is powered by a turbine engine, the fuel flow is monitored and controlled by a fuel control and the pilot is not required to adjust his throttle settings to compensate for his collective control inputs, thus greatly simplifying the pilot's workload.

The Robinson R22 is the world's most numerous helicopter and in widespread use for training, although its designer Frank Robinson stated that was never his intention.