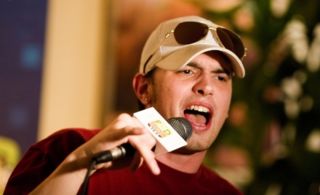 Bryce Case, Jr. (b. August 23, 1982), otherwise known as YTCracker (pronounced whitey cracker), is a rapper, former hacker, and Internet entrepreneur. YTCracker began producing rap music in 1998 in the genre that has since become known as nerdcore hip hop. His early work mainly focused on documenting and amusing the participants of the America Online hacking scene. YTCracker has been making a name for himself as a professional disc jockey, computer programmer, graphics designer and webmaster.

Bryce was born in La Mirada, California, USA to parents Bryce Case and Mary Case. His father was an electrical engineer by trade and moved the family back to his father's birthplace of Colorado when Bryce was 2 years old.

From a young age, Bryce was exposed to computers by his father and mother, learning to program BASIC at age 4. From there, his father taught him how to navigate MS-DOS and System V. Before long, he was involved in the local bulletin board systems and learning various other programming languages by reading books and examples.

Throughout school, he was involved in extracurricular academics including the math, science, and chess clubs. He also pursued fictional writing, placing second in the Betty Field Memorial Writing Contest in 8th grade. He was accepted into both SAIL and the International Baccalaureate program at General William J. Palmer High School in Colorado Springs, Colorado.

Ties to the Computer "Underworld"

In 1999, Bryce gained notoriety, media coverage, and a hefty restitution bill for defacing the web site of NASA's Goddard Space Flight Center, along with other government websites. [1]

These defacements launched him into the spotlight, making him a resource for the media, commenting on other hacking-related events, such as the denial of service attacks on Yahoo, eBay, and other well-known websites in 2000. [2]

Bryce dropped out of high school at the age of 17 to focus on a career in the information technology field. At 18, he took a job as a technical support representative for Gateway, Inc.. Shortly after, his then-girlfriend Jolene was found to be pregnant. At this time, Bryce took a senior systems analyst position with Ford Motor Company's Auto Finance division.

After leaving Ford, he took a job as a data strategist for MCI's Mass Markets division, authoring various web-based tools for the company before being laid off in the summer of 2004. It was at this time that Bryce decided to focus less on corporate work and more on personal interests.

YTCracker's first company was Digital Gangster Enterprises, LLC. Initially organized in 2001, its sole purpose was to focus on music promotion and production in the Colorado Springs area. Eventually it branched out into more online ventures, including various website assets.

YTCracker then partnered with longtime online friends and spamtec groupmates phlow and eGod, focusing on utilizing income gained from their online web properties and investing into brick-and-mortar businesses and real estate. 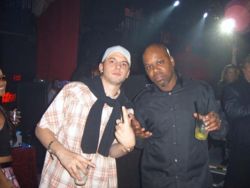 YTCracker with Too $hort at Players' Ball

Not only does YTCracker often find himself creating promotional songs for various web sites, he also performs (as both an MC and a DJ) at many events. Most notably, he has DJed for a party of thousands at Club Ice in Las Vegas, and performed alongside such musical legends as Xzibit, Cypress Hill, Digital Underground, George Clinton and Too $hort at the infamous Players' Ball. He also received a writing credit (credited as Whitey Cracker), for his contribution to an adult website, a song by famous rapper Too $hort on his 2003 album Married to the Game.

Aside from traveling around the country as a disc jockey, he also held a weekly residency at Club Eden in the spring of 2006.

Most of the songs by spamtec are pro spam and YTCracker claims to have drawn income from this market in the past. [3]

Since 1998, he has sporadically released his songs as they've been completed. In late 2004, he and rhyming partner phlow released stc is the greatest, a compilation of their works as the duo spamtec. The album was comprised of background instrumentals that are common on the file sharing networks, giving the music a familiar sound to the musicians who frequent these downloads.

In May, 2005, YTCracker released NerdRap Entertainment System, a seven song album. Six of the tracks had been previously unreleased. All of the beats on this album are original reworks based on background music from Nintendo Entertainment System games. This album features a little something for every geek, from tributes to Surge, to introspective rhymes about the hardships faced daily by nerds across the globe.