From Citizendium
(Redirected from Watch)
Jump to navigation Jump to search 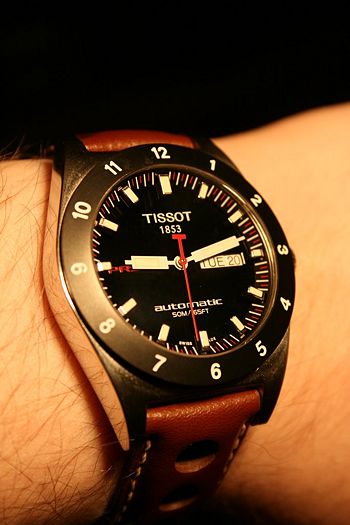 A wristwatch is a timepiece designed to be worn around the wrist, held on by a band. Modern wristwatches are often referred to simply as "watches", and are mostly electronic, despite having either an analog or digital appearance. There are wristwatches that are still entirely mechanical but because of the higher manufacturing and maintenance cost, these are becoming more rare and are considered "luxury items" or "antiques".

At some point in civilization (approximately 5000-6000 years ago[1]), it became important for Middle Easterners and Northern Africans to start managing time more efficiently.

The reasons for wanting to keep time, though, are speculative at best; but it should be noted that even early man may have done things during times of daylight and night. Hunting game, for example, was probably best done during the hours of which man could see and track his prey.

The earliest device for dividing time into units, the obelisk, was possibly created by the Egyptians around 3500 BC (although the Sumerians may have had a similar structure). It projected observable change in units throughout the day with a moving shadow that indicated the positional change of the sun. A similar device, the shadow clock, came into existence around 1500 BC and was divided into quantifiable, measureable units to determine time of day. The shadow clock divided the day into ten sections with two sections allocating whether the sun was setting or rising. At the midpoint of the day, the device was rotated, demonstrating an early way of dividing up morning(AM) and afternoon(PM).

Meanwhile, in other places around the world, different mechanisms were used to keep time. However, most were based on the rate of of water flowing over time. The greek word clepsydras ("water thieves") was used around 325 BC to describe stone vessels that were shaped so that water could flow out at a rate that would fill another marked vessel. Instead of relying on celestial positions, they suffered accuracy: water is subject to the environment, and it was extremely difficult to measure in accurate quantities.

In the early 14th century, large mechanical clocks were invented and used in cities across Italy. They were driven by weights, and were regulated by a verge-and-foliot escapement. This method of regulating time did not change over 300 years until the invention of spring-powered clocks by Peter Henlein, somewhere between 1500 and 1510, in Nuremberg. This was the first key component allowing better, portable clocks. Henlein was also the man to create the first portable watch.[2] His occupation as a locksmith made him a mechanic and also a toolsmith; this gave him experience in crafting small, operational mechanisms.

Henlein, unfortunately, did not create the most accurate watch design. Now that timepieces were portable and carryable, the forces of motion generated by movement had detrimental effects on the mechanisms inside. From Henlein's time onward, the focus of watchmaking became to developing a better, more efficient watch that also kept accurate time. The first stabilizing mechanism invented was called the stackfreed, but it was unrefined and inefficient, giving way to the fusee.

A Swiss mechanic living in Prague named Jacob Zech, developed a solution to one of the problems of inaccurate timekeeping around 1525. It was his work on the fusee, and that of another Swiss by the name of Gruet, whom perfected it. At this point in history, Swiss timepieces became the most sought-after because of their increased accuracy. In between 1550 and 1600, screws, brass wheels, and crystals began to appear in timepiece construction. Due to their popularity, watches became something of a commodity; royalty wore them especially decorated and adorned, and for most citizens it became customary to carry one. It is suggested that Edward the VI was the first Englishman to actually possess a watch.

The next real mechanical advancement came in around 1656, seemingly by two separate inventors looking for a way to replace the pendulums within clocks. For a long time, pendulums were used because of a property known as isochronism that they exhibit. An Englishman named Hooke, and a Hollander named Huygens, both developed the concept of a hair-spring, that exhibits approximately the same isochronistic motions as a pendulum. Incidentally, the first pendulum-clock concept was developed by Galileo as early as 1582 and sometime before his death in 1642, although he never lived to build it.

In 1671 William Clement, of London, employed a slightly different method of of isochronism. His clocks employed an "anchor" or "recoil" style escapement. Four years later, Huygens creates the balance wheel and spring assembly.

From the early 18th century onward, many improvements to timekeeping would be made. In 1704, another Swiss by the name of Nicholas Facio further enhanced watch accuracy by the introduction of bearings made from jewels. The advantages to using very small gemstomes as watch bearings are that they exhibit almost no friction in their movements because of their smoothness, and are very hard(durable). Fortunately, the value added by the presence of these tiny gems is practically negligible.

Because much of the world was still being discovered and trade between nations by sailing ship had been established, a new need for even greater accuracy in timekeeping became necessary: navigation. Many governments of Europe offered rich rewards for a timepiece that could assist with the exact determination of longitude and latitude at sea. In 1721, George Graham improved timekeeping by compensating for pendulum material expansion due to thermal differences. From 1761 to 1764, an inventor, carpenter, and self-taught click-maker named John Harrison built a marine chronometer with a balance and wheel escapement, and comes up with the gridiron pendulum. His marine chronometer was put to a navigational test--on a voyage to the West Indies spurned by a prize offered by the British Government in 1714, to enable navigators to determine longitude within one-half of a degree, his timepiece managed to only vary by a minute and four seconds during a five-month span. His improvement was able to reduce momentary friction in a clock that only lost about one-fifth of a second a day, which was ten times better than the prize requirement.

Other minor additions would come to the modern watch: during the American Revolution, Thomas Mudge developed the modern escapement; soon after a Swiss-Parisian Abraham Louis Breguet made an improvement to the hair-spring, and by 1800 the fusee had been done away with all together, reducing the bulk and size requirement for the mechanisms inside.

The last of the mechanical advancements would come from Seigmund Riefler in 1889 and R. J. Rudd in 1898. They both developed free pendulum clocks, setting the last standard for moving parts. Riefler's "nearly-free" pendulum clock became a standard for astronomical laboratories during his time.

The move from mechanics to electronic timepieces happened globally, and in the 20th century. Many countries managed to come up with inventions and advancements within a decade or two. The major players involved in this evolution are the Japanese, the Swiss, and the Americans.

G. W. Pierce managed to lay the initial groundwork for Walter Guyton Cady's development of first quartz crystal oscillators. The first quartz crystal oscillator was more or less produced by Cady in the 1920s, when he was a professor of physics at Wesleyan University[3]. Quartz crystals keep time by a property called piezoelectricity, whereby an electric field causes the crystal to change shape. This property was discoved by Pierre Curie, in 1880. Further physical modification of quartz through either squeezing or bending causes another electric field to be generated. The interaction of mechanical stress and electric fields causes the crystal to vibrate at a relatively constant frequency. The first fully functional clock utilizing a quartz oscillator was invented by Warren Marrison in 1927.

In 1940, the Swiss established the Laboratoire Suisse de Recherches Horologeres (LSRH), in part with the timepiece industry to keep up with trends happening around the world.

The first battery-operated electric watch was developed by the Hamilton Watch Company between 1946 and 1957[4]. The "Hamilton Electric 500" was announced at a press conference as the "watch of the future". However, the development of it was not complete by the time the company decided to announce it's invention and suffered from major design problems: a short battery life, and a flawed design which was susceptible to utter electronic failure. The production of the 500 ended in 1969.

There was still some uncertainty as to what direction watch technology would go, and in 1955 Max Hetzel of Switzerland creates prototypes of watches that use tuning forks instead of traditional balance wheels.

Having established the first major Japanese pocketwatch, Seiko creates the first Japanese quartz chronometer, dubbed the "951" in 1961. A scant six years later, they release an updated "953" model pocketwatch and wristwatch that are also both quartz crystal powered. One year later, the Swiss establish a new lab called the Centre Electronique Horloger (CEH) for the study of electronic advancements in timepieces. From the developments at CEH, come swiss quartz watch prototypes in 1967.

In 1968, Juergen Staudte, while working at North American Aviation (which eventually becomes Rockwell) develops a process to mass produce quartz crystals. The next year, Seiko again produces another quartz watch: this one being the first commercially available model. The 35SQ Astron goes on sale Christmas Day in 1969.

The work performed at CEH was not in vain; in 1970 the CEH produces the most popular Swiss timepiece, the Beta 21 which went on sale April 10th of that year. At the same time, the American company Hamilton, announces on April 4tha joint product between themselves and another company, Electro-Data: the Pulsar. The Pulsar was developed by two Hamilton employees, John Bergey and Dick Walton. Two years later, the Pulsar enters the market in the United States.

A wristwatch is comprised of three main pieces: a watchband, the watchface, and the crystal which protects in components inside the watchface. Most crystals are made from plexiglass, ordinary glass referred to as "mineral glass", or synthetic sapphire. Some crystals are made from a combination of sapphire and mineral glass, usually assembled in layers. Seiko, a large watchmaker, makes a type of crystal that is mineral glass covered by a layer of synthetic sapphire which it called "Sapphlex".

The three types of crystals have different costs, plexiglass being the cheapest, is the least likely to shatter but is extremely scratch-prone. Mineral glass is tempered is more likely to break but is more scratch-resistant. Synthetic sapphire, having the greatest hardness is the most expensive but is brittle, and easily shatters due to it's crystalline structure.