Virtual servers are isolated in their own virtual environment allowing multiple instances to be hosted simultaneously on a single server. Guests on the server can run different applications or tasks, on different operating systems, independently from one another. From example, one virtual server can run as a chat server, another as an FTP server, and another as database server, all of which can run concurrently on a single physical machine. To ensure independence and consistency, the physical server utilizes a hypervisor whose role is to monitor the states of each guest. To server users, this appears as if each virtual server is a unique physical device thus maximizing the resources and processing-power of a single physical server.

The concept of virtual machines started with IBM System/360 mainframes running on CP-67 or CP/CMS time-sharing operating systems. CP/CMS was first developed by IBM’s Cambridge Scientific Center (CSC) which consists of a control program (CP), now widely known as a hypervisor, and a console/conversational monitor screen (CMS) which served as a user interface. Each user would have a single CMS and the CP created the virtual machine environment for each user. The introduction of the CP/CMS virtual machine concept allowed:

In 1972, IBM re-implemented CP/CMS as CP-370 and included it as their first virtual machine operating system on their VM/370 or Virtual Machine Facility/370 line of operating systems. At the time, full-support for virtual memory on the hardware side was also introduced on IBM System/370 machines which significantly improved the efficiency and utilization of virtual machine use.

X86 architecture first appeared in 1978 when Intel released its 8086 CPU. Upon the onset of x86 processors, the usage of mainframe computers declined since client-server applications, along with Windows and Linux operating systems, made server computing significantly inexpensive. This as well changed the entire IT infrastructure from having large mainframe computers to instead having multiple single-purposed servers. This model, however, presented additional problems:[1]

Because of the aforementioned problems, virtualization was revisited as a possible solution by some organizations and in 1999, VMWare introduced virtualization on x86 systems. Because x86 systems had absolutely no support for virtualization, this innovation baffled many experts since the virtualization on these systems was deemed impossible. Ever since this introduction, server utilization significantly increased from ~10%-15% to ~60%-80%, in addition, the physical need for storage and maintenance was reduced 5-15 times. Despite these improvements, there was still significant overhead on the hypervisor since there was no hardware assistance.

Between 2005 and 2006, Intel and AMD both came out with their own hardware solutions to alleviate some of the overhead imposed on the hypervisor by supporting virtualization. Intel’s set of processors that support virtualization are in the Intel VT-x set while AMD’s support is in the AMD-V set.

Virtual servers are computers which run in a virtualized environment knowingly or unknowingly. Virtualized environment is created by abstracting hardware level from the operating systems (OS). This level of abstraction occurs by implementing a thin layer of software called hypervisor which sits between the physical hardware and the operating system running on top of it. 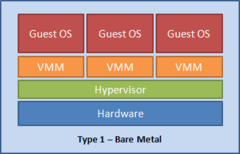 Hypervisor also known as Virtual Machine Monitor (VMM) is a software which provides a thin layer of abstracted hardware to the targeted Guest OS. Guest OSs running on top of hypervisor "sees" virtual hardware provided by the hypervisor. Depending on the type of hypervisor and the Guest OS in use, the Guest OS might or might be aware it's running in a virtualized environment. [2]

There are currently three virtualization techniques, each with their advantages and disadvantages.

Intel's version of hardware virtualization known as Intel-VT comprises of three separate modules. Processor component is called Intel VT-x for Xeon processors and VT-i for Itanium processors. Intel also has a virtualization hardware supported in their chipset called VT-d. VT-d handles the I/Os from the OSs and enables the hypervisors to offload I/O tasks to the chipset allowing greater performances. Third module is called VT-c which handles the network traffic. With VT-c enabled network card, the chipset in the network card can handle the network traffic load between virtualized machines.[7][8]

AMD with its own hardware virtualization is packaged under the product name AMD-V. AMD-V enables similar advantages of Intel's Intel-VT, providing separate additional virtualization instructions that can be used by the hypervisors to eliminate costly instruction emulations. Addition to CPU instructions, AMD-V like Intel-VT improves memory management allowing the hardware to perform the address look up rather than having it done within the software thus improving performance. Lastly, AMD-V also includes special I/O instructions to improve I/O throughput by offloading I/O instructions to the hardware.[6] 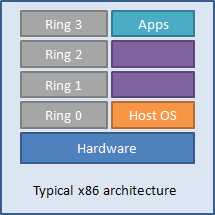 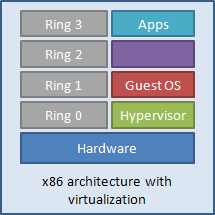 In an x86 operating system environment, the OS is designed to run directly on top of the hardware and the user applications interfaces with the hardware through the OS. In the model of trust computing base this hierarchy is normally represented with four levels of privilege known as TCB Rings. With the four ring levels: 0, 1, 2, 3, the base OS is expected to run in ring 0 where it has the highest privileges and can directly communication with the hardware. User applications typically run in Ring 3 where it is least privileged and confined. In the model of virtualization, because the hypervisor simulates the hardware and sits below the base OS, the hypervisor takes the place of ring 0 thus pushing the Guest OS system to higher level. This posses great challenges to the OS expecting to run at ring 0 and realizing it's located in a higher level. VMware was first to overcome this difficulty by using a technique binary translation explained above.[9]

Hardware Assisted
Using hardware assisted memory management unit, hypervisors can focus on other major tasks such as communications from the Guest OSs to the physical hardware and less about memory management, thus increase in performance. In the case of Intel-VT, Intel calls this technique Extended Page Table (EPT). EPT allows direct translation of the Guest OS's page tables to EPT bypassing the necessary translation done by the hypervisor. The same process is called Nested Page Table (NPT) using AMD's implementation.

One area of today's computing sector which leverages heavily on virtualization is hosting service providers. Hosting service providers provides abilities for the end users to create and upload web applications to their servers. Typical hosting service provider employs hundreds to thousands of servers located in an environmentally controlled data center and sells portions of the servers to the customers. In the pre-virtualization era, a single server was setup for a single customer, enabling the customer to login and upload files to the server to serve. This model transitioned to setting up separate web directories for each customers and utilize a single server for multiple customers. However this posed a problem where customers needed to install their own custom applications on the server or needing to run a different version of web service application different from what's currently installed. Because of these challenges, virtual private servers were quickly adapted in hosting service sector. Virtual private servers enabled each customers to run their own full servers, install their own programs and not having to worry about shared tenents and custom configurations. Most large hosting service providers offer virtual private server as one of their packages and enables the end users to either install Linux or Windows to run their products.

Cloud computing is recent phenomenon, a buzz term, which addition to virtual private server allows the end user to shrink or expand the resources depending on the work load. In the typical virtual server environment, a single physical server is segmented into multiple virtual servers, however in cloud computing environment, the reverse is also possible by combining multiple virtual server's resources into a single logical server. This is truly is an emerging area with Amazon and Google spearheading the effort of utilizing their well established data warehouses to offer the customers the security and the reliabilities of their data centers. Unlike the traditional web hosting model where one pays monthly fees to the hosting company, in cloud computing model, the fees are usually charged by an hour. One would only pay per computing cycle used, much like utilities from the grid.

One of the main driving forces behind the push for virtualization in industry is the cost saving potential that can occur from multiple servers on one machine as opposed to the need for separate servers for each instance of an operating system. Not only does one save on the physical hardware costs involved in the purchase of multiple servers, the cost of maintaining the hardware decreases as fewer servers are needed that would otherwise require extra physical maintenance, climate control, and space. Fewer machines also equates to lower energy costs.

There is a lot of potential for growth in the virtual server market. In a recent survey, two-thirds of the companies surveyed ran less than half of their applications on virtual servers and over half of the companies surveyed have even begun to virtualize their desktop. VMware estimates that the number of enterprises beginning to adopt their x86 virtualization has increased by 25% each year.[11] These figures alone show that not only is there potential for growth in the market, there is also desire for enterprises to begin using these virtual servers. Financial estimates put this market's value at over 19 billion dollars.[12]

What's the reason for all this growth in the virtual server industry? In a word...money. In moving to and utilizing virtual servers, Business Insights reports that there are several places that costs could be cut:[12]

The current corporate market for creating virtual servers is volatile and involves a few main players. [11]

These three companies make up the vast majority of the virtual server market and have such a lead that the market landscape should not drastically change in the next several years.

There are several challenges this industry faces if it is to continue its fast growth: [13]

Although these are all difficult challenges to consider, the analysis of the market conditions suggests that these are not conditions that act as a barrier to entry.