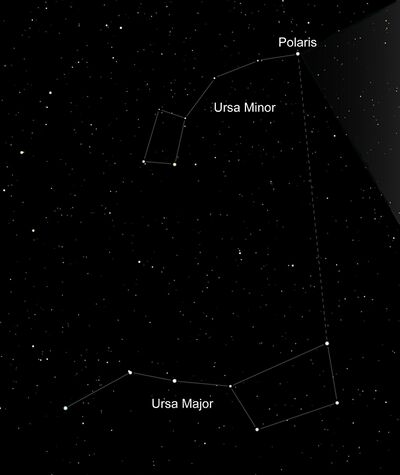 Ursa Major, or the Great Bear (stricly, Greater She-Bear), is a constellation in the northern sky. Its brightest stars are also known as the Big Dipper (in American English) and the Plough (in British English). Constellations Ursa Major (the "Big Dipper") and Ursa Minor (the "Little Dipper") with Polaris, the North Star, are usually spotted together. Children around the Nortern hemisphere are taught to find the North Star (which hangs over the North Pole) by means of these two easy-to-spot constellations. The Big Dipper's outer lip points to the North Star, which is at the end of the handle of the Little Dipper. In the course of one night, only the North Star appears unmoving, while all the other stars appear to revolve part-way around it. The other stars revolve all the way around the North Star in approximately one 24-hour day (one rotation of the earth).