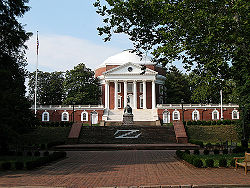 (CC) Photo: Marc Carlson
The Rotunda at the University of Virginia

The University of Virginia (UVA or U.Va.) is a public research university that was founded by Thomas Jefferson in 1819 in Charlottesville, Virginia. It is one of the oldest public universities in the United States and the first American university to offer majors in several fields other than law, medicine, or religion.

The University of Virginia is part of Virginia's state university system, which also includes the College of William and Mary, Virginia Polytechnic Institute (known more commonly as Virginia Tech), James Madison University, and several others.

The University was officially chartered by the state of Virginia in 1819, making it the second college in Virginia, after the College of William and Mary.

The original grounds of the University of Virginia were purchased by James Monroe in 1789. It was purchased by the Board of Visitors (UVA's governing body) in 1817, shortly after Monroe was elected president.

Originally, the University was housed entirely in Jefferson's "Academical Village," which consists of the Lawn and Range and Rotunda, which are United Nations Heritage Sites today. The Lawn consists of a graded hill flanked by 104 dormitory rooms for students and ten Pavilions that house select professors. Though the Lawn rooms originally slept as many as four students apiece, today they hold only one student each and are highly prestigious. Nine of the pavilions are home to professors. Pavilion Seven is now the Colonnade Club.

U.Va. frequently ranks in the US New and World Reports top 25 for colleges and universities overall, and battles Michigan and Berkeley for the top 3 rankings for public universities.

Athletically, UVA's team mascot is a Cavalier, but the teams are called both Cavaliers and Wahoos. Virginia competes in the Atlantic Coast Conference.