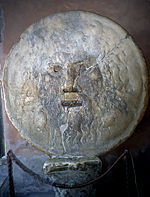 The Boca della Verita or Mouth of Truth in Rome. Photo by Jerzy Strzelecki

Truth is spoken about in two ways: either as deep, important wisdom, or as a certain desirable quality of any statement, no matter how trivial. Religious thinkers sometimes speak of the Truth—with a capital "T"—as meaning an entire worldview, or some deeply important insight, or even God himself.[1] By contrast, for contemporary philosophers, the topic of truth is a rather abstract, technical one in epistemology and the philosophy of language: they study what we mean whenever we say or believe that any proposition, such as the claim expressed by the sentence "the Rocky Mountains is in North America", is true. For discussion of deep Truth, we recommend that you consult the articles religion, wisdom, enlightenment, God, and worldview.

The word "truth" also has a history of being used as a polemical tool, as when a person tries to exaggerate the believability of a statement by such phrasing as, "It's the pure and simple truth"[2], as though increasing the emphasis thereby proves the assertion.

Setting out the question

The concept of truth has a lot of work to do in philosophy: if one wishes to say that certain theories about how the world is are so, one is asserting that they are true.

In epistemology, truth forms the basis for a great number of theories about knowledge because it seems altogether to strange to suggest that we have knowledge of false things - we think we know, we have a strong belief that we know, but we do not actually know if the thing which we purport has no connection to how things are in reality - if there is no truth to back up one's beliefs. Truth does not seem to answer all of our questions in epistemology: one can have a justified belief about something and be wrong, and one can have a belief that turns out to be true by accident (if, say, you managed to successfully choose the lottery numbers you didn't know that the lottery numbers were going to be correct, but you are very fortunate that your guess turned out to be true; also in the cases described by Edmund Gettier - so-called Gettier cases - where the justification exists for one truth, but does not seem to transfer to inductively or deductively entailed beliefs correctly).

In philosophy of language, one wishes to answer quite simply what meaning there is for a sentence of the form "p is true". The straight-forward solution to this problem is to say something like:

p is true if and only if p

The problem arises if we apply this to a concrete case:

This seems to be an exceptionally strange sort of sentence: we are using the same words to explain the meaning of the quoted sentence. It seems that we aren't really explaining anything at all. Compare this to a sentence like this:

"Der Schnee ist weiß" is true if and only if snow is white.

This classic translation seems to solve our initial objection: the quoted German sentence has the same truth conditions as the quoted English sentence "Snow is white".

Philosophers have produced a great number of different theories of truth including traditional theories, semantic theories of truth (which attempt to overcome problems like the liars paradox), pragmatic theories of truth (such as those of C.S. Peirce, William James and John Dewey) and deflationary accounts of truth like P.F. Strawson's performative theory, Willard van Orman Quine's disquotationalism, prosententialism, Paul Horwich's minimalism account.