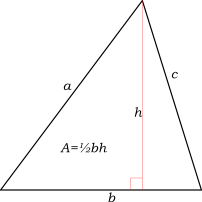 This article is about the geometric shape. For the drafting tool, see Triangle (tool).

A triangle is a two dimensional polygon with three sides meeting at three corners. Alternatively it is three distinct points connected by straight lines called sides. 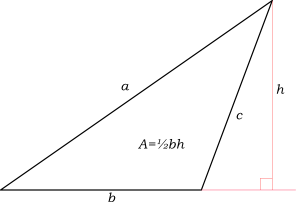 In Euclidian geometry, the sum of the three interior angles of any triangle is 180 degrees. The area of a triangle is equal to one-half times the length of one side times the altitude relative to that side. (Altitude is the distance of the corner opposite the base from the line which contains the base. In an obtuse triangle, the altitude may be measured from a point not in the base.) In a right triangle, the base and the altitude are the two sides which meet at the right angle.

Heron's formula for the area of a triangle uses only the lengths of the sides, and is:

are the lengths of the three sides.

A right triangle is a triangle where one of the interior angles is a right angle, measuring 90 degrees (or π/2 radians). The two sides which meet at the right angle are called legs, and the remaining side, opposite the right angle, is called the hypotenuse. 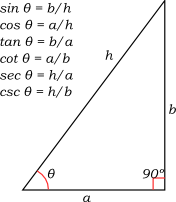