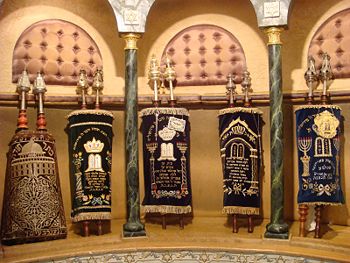 The Torah (תורה), literally "Teaching" or "Instruction," is the holiest book of Judaism. It originally referred to the Teachings of Moses, as written down in the Five Books of Moses, which open the Tenach (Jewish Bible).

Later it came to include the entire set of teachings relating to Judaism, including the entire "Written Torah" or Torah Shebichtav, consisting of the 24 books of the Tenach; and the "Oral Torah" or Torah Shebe'al Peh, which consists of the "Midrashim" (homiletic interpretations), Mishna, Talmud, Commentaries, Books of Religious Law etc.

The central texts of Judaism are the Five Books of Moses, known in Hebrew as Chamisha Chumshei Torah (חמישה חומשי תורה) and in English as the Pentateuch.