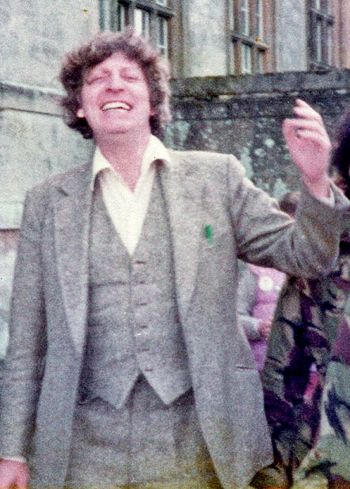 (CC) Photo: Richard Lemarchand
Tom Baker played the lead role in Doctor Who for the longest period on television, from 1974 to 1981. His trademark scarf became an iconic image from the programme. This photo shows Baker soon after leaving the role, at a 20th-anniversary convention.

Tom Baker (born 20th January, 1934) is an English actor, best known as the fourth to take on the lead role in the British science fiction series Doctor Who, from 1974 to 1981 - the longest-serving actor in the role. His portrayal of 'the Doctor' was the first to draw public attention to him; after seven years on-screen, he remains strongly associated with the programme. Following Doctor Who, Baker took several more roles in television, with his best-known recent role being the narrator for the comedy series Little Britain. In 2009 and 2010, he reprised his role as the Doctor for two series of BBC audio plays.