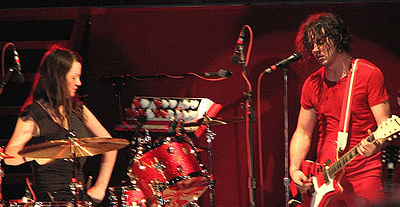 Jack White (guitar and vocals) and Meg White (drums) are better known together as the Detroit minimalist rock music duo The White Stripes. Formed in 1997, the duo was notorious for keeping quiet about their backgrounds; were they ex-husband and wife or brother and sister? From their red-and-white peppermint candy color of their self-titled debut album, the White Stripes were a wild success playing garage rock, blues, and folk. Jack White was a strong vocalist and guitar player capable of morphing many different styles of music in just a matter of fifteen minutes, ranging from folk blues to Kinks-esque pop, and Led Zeppelin rock. Though deeply rooted in garage rock and blues, the duo stresses a raw, minimalist sound influenced by American folk music.

Sprung from the Detroit underground music scene in 1997, the White Stripes soon gained a national following after touring with famous indie rock bands Pavement and Sleater-Kinney. The duo's second LP, De Stijl, was released in 2000 and further increased their popularity. In 2001 the White Stripes went into the studio to record White Blood Cells, a smash hit among critics that placed the band among the Strokes and the Hives as the leaders of the garage rock revival that was slowly taking over the nation at the start of the new millennium. An appearance on Late Night with David Letterman, articles about them in Time, The New Yorker, and Entertainment Weekly, and their video of "Fell in Love with a Girl" in heavy rotation on MTV, increased the band's growing reputation.

Their fourth full length album, Elephant, was released in 2003 with much critical acclaim. "Seven Nation Army", the album's first single, became the Stripes most successful single to date and was met by heavy critical acclaim. In 2005 the Stripes followed up with Get Behind Me Satan, featuring a diverse mix of genres from disco-metal to marimba-driven pop. The album also downplayed the blues influences that had dominated their earlier albums. Jack White formed a new group with Brendan Benson and Jack Lawrence and Peter Keeler of the Greenhornes called the Racontuers. They released their debut album, Broken Boy Soldiers, in 2006.

Icky Thump, the White Stripes sixth album, was released in 2007, featuring their first ever songs to incorporate mariachi horns and bagpipes. The album debuted at #2 on the Billboard 200 in the US and #1 in the UK Albums Chart.

The White Stripes officially split on 2 February 2011 with an announcement to the media that they will be 'making no further new recordings or perform live'.[1]