Thaddeus Stevens (April 4, 1792 – August 11, 1868), was a dominant leader of the U.S. House of Representatives during the American Civil War and Reconstruction. He was best known for his intense devotion to victory in war, and after the war to support for equal rights for the Freedmen (freed slaves), and harsh treatment of the ex-Confederates. He and Senator Charles Sumner were the powerful leaders of the Radical Republicans. Stevens' biographer characterizes him as, "The Great Commoner, savior of free public education in Pennsylvania, national Republican leader in the struggles against slavery in the United States and intrepid mainstay of the attempt to secure racial justice for the freedmen during Reconstruction, the only member of the House of Representatives ever to have been known, even if mistakenly, as the 'dictator' of Congress."[1]

Stevens was born in Danville, Vermont, and suffered from many hardships during his childhood, including a club foot. His father was an alcoholic who was unable to hold a steady job and who abandoned the family before dying in the War of 1812. Stevens attended Dartmouth College, graduating in 1814; he moved to York, Pennsylvania, where he taught school and studied law. After admission to the bar, he established a successful law practice, first in Gettysburg, then in Lancaster in 1815. He later took on several young lawyers, among them Edward McPherson, who later became his protegé and ardent supporter in Congress.

At different political stages Stevens was active in different parties--always the minority party until the 1860s. During the last years of the First Party System he was a Federalistl in the Second Party System, he started with the Anti-Masonic Party, then switched to the Whig Party. When the Third Party System began in the 1850s he helped found the new Republican party in Pennsylvania. He devoted his enormous energies to the destruction of what he considered the Slave Power, that is the conspiracy he saw of slave owners to seize control of the federal government and block the progress of liberty. In 1848 he was elected as a Whig to the U.S. House of Representatives. where he soon displayed unusual leadership qualities by a combination of energy, attention to detail, and commitment to profound principle of republicanism. He defended minorities, such as Indians, Adventists, Mormons, Jews, Chinese, and women. He concentrated his greatest efforts on helping slaves (especially runaways) and working to destroy the system that denied them rights.

During the Civil War Stevens was one of the three or four most powerful men in Congress, using his slashing oratorical powers, his chairmanship of the Committee on Ways and Means (which set taxes), and above all his single-minded devotion to victory. As a member of the critical "Joint Committee on Reconstruction" his power grew during Reconstruction as he dominated the House and helped to draft both the Fourteenth Amendment and the Reconstruction Act in 1867. 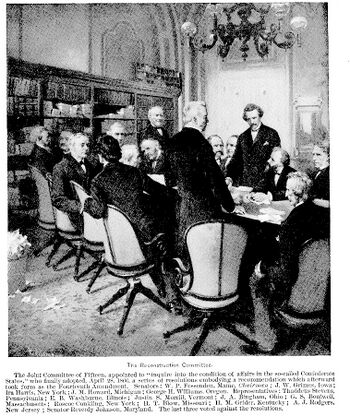 Stevens was one of two Congressmen in July 1861 opposing the Crittenden-Johnson Resolution stating the limited war aim of restoring the Union while preserving slavery; he helped repeal it in December. In August, 1861, he supported the first law attacking slavery, the Confiscation Act that said owners would forfeit any slaves they allowed to help the Confederate war effort. By December he was the first Congressional leader pushing for emancipation as a tool to weaken the rebellion. He called for total war on January 22, 1862:

"Let us not be deceived. Those who talk about peace in sixty days are shallow statesmen. The war will not end until the government shall more fully recognize the magnitude of the crisis; until they have discovered that this is an internecine war in which one party or the other must be reduced to hopeless feebleness and the power of further effort shall be utterly annihilated. It is a sad but true alternative. The South can never be reduced to that condition so long as the war is prosecuted on its present principles. The North with all its millions of people and its countless wealth can never conquer the South until a new mode of warfare is adopted. So long as these states are left the means of cultivating their fields through forced labor, you may expend the blood of thousands and billions of money year by year, without being any nearer the end, unless you reach it by your own submission and the ruin of the nation. Slavery gives the South a great advantage in time of war. They need not, and do not, withdraw a single hand from the cultivation of the soil. Every able-bodied white man can be spared for the army. The black man, without lifting a weapon, is the mainstay of the war. How, then, can the war be carried on so as to save the Union and constitutional liberty? Prejudices may be shocked, weak minds startled, weak nerves may tremble, but they must hear and adopt it. Universal emancipation must be proclaimed to all. Those who now furnish the means of war, but who are the natural enemies of slaveholders, must be made our allies. If the slaves no longer raised cotton and rice, tobacco and grain for the rebels, this war would cease in six months, even though the liberated slaves would not raise a hand against their masters. They would no longer produce the means by which they sustain the war."[2]

Stevens was so outspoken in his condemnation of the Confederacy that when the Confederates briefly invaded Pennsylvania just before the Gettysburg battle they made a point of burning much of his iron business.

Stevens was the leader of the Radical Republicans who had full control of Congress after the 1866 elections. He largely set the course of Reconstruction. He wanted to begin to rebuild the South, using military power to force the South to recognize the equality of Freedmen. When President Johnson resisted, Stevens proposed and passed the resolution for the impeachment of Andrew Johnson in 1868.

Stevens told W. W. Holden, the Republican governor of North Carolina, in December, 1866, "It would be best for the South to remain ten years longer under military rule, and that during this time we would have Territorial Governors, with Territorial Legislatures, and the government at Washington would pay our general expenses as territories, and educate our children, white and colored."[3]

When Stevens died the public expression of grief in Washington was second only to that following the death of Abraham Lincoln in 1865. Twenty thousand people, one-half of whom were free black men, attended his funeral in Lancaster, Pennsylvania. He chose to be buried in the Shreiner-Concord Cemetery because it was the only cemetery that would accept people without regard to race.

Stevens wrote the inscription on his head stone that reads: "I repose in this quiet and secluded spot, not from any natural preference for solitude, but finding other cemeteries limited as to race, by charter rules, I have chosen this that I might illustrate in my death the principles which I advocated through a long life, equality of man before his Creator."

Stevens monument is at the intersection of North Mulberry Street and West Chestnut Street in Lancaster, Pennsylvania.

Stevens dreamed of a socially just world, where unearned privilege did not exist.[4] He believed from his personal experience that being different or having a different perspective can enrich society.[5] He believed that differences among people should not be feared or oppressed but celebrated.[6] In his will he left $50,000 to establish Stevens, a school for the relief and refuge of homeless, indigent orphans. This original bequest has now evolved into Thaddeus Stevens College of Technology. His will stated:

"They shall be carefully educated in the various branches of English education and all industrial trades and pursuits. No preference shall be shown on account of race or color in their admission or treatment. Neither poor Germans, Irish or Mahometan, nor any others on account their race or religion of their parents, shall be excluded. They shall be fed at the same table."

Historians' views of Stevens have swung sharply since his death as interpretations of Reconstruction have changed. The Dunning School, which viewed the period as a disaster and held racist views of blacks, saw Stevens as a villain for his advocacy of harsh measures in the South, and this characterization held sway for most of the 20th Century. Austin Stoneman, the corrupt congressman in D.W. Griffith's The Birth of a Nation, was modeled on Stevens. The congressman's reputation has been rehabilitated since the rise of the neo-abolitionist school in the 1960s, and Stevens has been praised for his far-sighted views on race relations.