The Taung child is the fossilized skull of an infant hominin and the holotype of the species Australopithecus africanus. The fossil was discovered at the Buxton limeworks, Taung, Northwest Province, South Africa in 1924 and described by Raymond Dart in 1925. 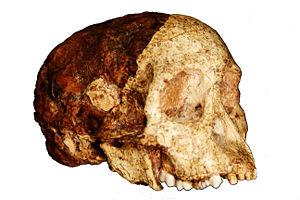 The Taung skull was recovered from the Buxton limeworks at Taung, South Africa during blasting operations to recover lime from massive tufa deposits on the Kalahari escarpment. Blasting had uncovered a breccia-filled cave and the child's skull was recovered along with a number of fossilized monkeys and hyraxes. The Taung child was not recognized for its significance until Raymond Dart, Professor of Anatomy at the University of the Witwatersrand in Johannesburg received a box containing fossils found at the limeworks by a Mr. M. de Bruyn in November of 1924. Prof. R. B. Young, a geologist, had received the fossils from the Buxton mine manager, Mr. A.E. Spiers[1]. The Taung child's face was prepared by Dart from its encasing breccia and published the February 7th edition of Nature[2].

The Taung child skull has been described as the "most important palaeo-anthropological discovery of the century"[1]. This claim is justified as it was this discovery that effectively launched the search for human ancestors in Africa. The find also played a part in debunking the Piltdown hoax as it showed that early human ancestors had small brains and human-like teeth. It is the type specimen for the genus Australopithecus and the species africanus.

The Buxton limeworks is located in a tufa precipitating from dolomites on the edge of the Kalahari escarpment. The tufas are vast, covering several kilometres. The Taung skull was found in a pink breccia located near a large decalcified infill of reddish-brown sand[1].

The actual age of the Taung child is unknown as the exact location of its discovery was destroyed during subsequent lime mining operations. Geologists and paleontologists have estimated the age of the fossil at approximately 2 million years before present. 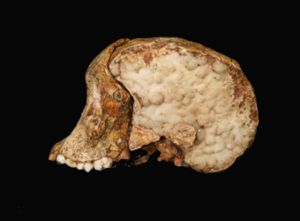 The left hand side of the Taung child is covered in calcium carbonate crystals that formed inside of the skull during the fossilization process like mini stalagmites.