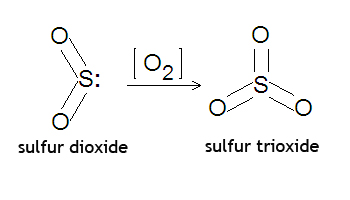 Sulfur dioxide (also spelled sulphur dioxide) is a gas (SO2) whose molecular structure consists of one atom of sulfur and two atoms of oxygen.

It is widely used for the manufacture of sulfuric acid, sulfurous acid and sulfite salts. It is also used as a fruit preservative and it destroys fungi and bacteria.

It is a colorless gas with a choking odor. The structure is stabilized by utilizing a transargonic bonding pattern using one 3d electron orbital. The structure includes two double bonds between sulfur and the oxygen atoms, and one lone pair of electrons on the sulfur atom. The length of the double bonds are short, only 1.49 Angstroms, and the O-S-O bond angle is 119.5 degrees.

Sulfur dioxide can be produced from the oxidation of the relatively unstable sulfur monoxide. Thus, SO decomposes exothermically to yield sulfur dioxide

It can also be produced by burning elemental sulfur or a sulfide.

In the laboratory, it can be made by reacting sodium hydrogen sulfide with a strong acid, such as sulfuric acid.

The resulting gas product can be purified and dried by bubbling it through sulfuric acid.

Synthesis of other sulfur oxides and acids

The equilibrium of this reaction is not favorable enough to be used industrially. Instead, surface chemistry using a platinum or vanadium catalyst is used for the commercial production of SO3.