From Citizendium
(Redirected from StarCraft)
Jump to navigation Jump to search

StarCraft is a military science fiction real-time strategy (RTS) game released by Blizzard Entertainment in 1998. The game was the first to feature three uniquely different playable races, the interplay of which posed a very complex balancing act with such great depth and variation in strategy that made it one of the best-selling games for the PC, with more than 11 million copies sold as of 2009. The main story is set around 2500 AD in a distant part of the Milky Way Galaxy, when the Terrans, who are descendants of the exiled prisoners from Earth, come in conflict with the insect-like Zerg and the highly-evolved Protoss. The storyline is unveiled chronologically in single-player campaigns, each played with a different race. StarCraft's gameplay is typical of the RTS style established since the 90s, involving resource gathering, unit production, fog of war, and management of supply quota. Its replay value was considered phenomenal due to its support of multi-player mode through LAN and Battle.net, which facilitated competitive play and laid the ground for the prominent rise of professional gaming in South Korea. Blizzard quickly capitalized on StarCraft's immense popularity by releasing the Brood War expansion pack a year later. The long-waited sequel, StarCraft II, was officially announced in South Korea in 2007 and released as trilogy.[1]

In the StarCraft storyline, Earth faces a Malthusian catastrophe by the 23rd century with a population of 23 billion. The rise of third world countries and the lack of a clearly-defined global pecking order also contribute to a volatile international environment. The world falls into a state of pessimism and civil unrest, aggravated by the controversy and violence over the degenerate use of genetic manipulation and cybertechnology.[2]

But Earth's catastrophic course is averted by the succession of then-defunct United Nations by the United Powers League, which restores order throughout most of Earth's territories under its control. In attempt to remove social and ideological differences, the UPL deploys fascist tactics to enforce bans on religion and racial division, as well as replacing native languages with English. The organization also adopts a quasi-religious doctrine of the "divinity of mankind" directed against the practices of artificial enhancement on humans. In its ultimate act of cleansing mankind, the UPL secretly contrives a final solution to imprison synthetics, hackers, and criminals of all sorts, called the Project Purification, killing 400 million in the process.[3]

The other priorities of the UPL include scientifc advancements and space exploration. Within forty years of its founding, colonies are launched throughout the Solar System. During this period, colonization into other star systems becomes possible as advances are made relating to warp-drives and cryogenic hibernation technology. Four giant spaceships are readied with 40,000 prisoners onboard. Although the voyage in hyperspace is only meant to last a year, an issue with the navigational system causes the ships to continue on for nearly thirty years until the engines are exhausted. In emergency mode, the ships search for the nearest planets that are hospitable for human life in a space which is would later be known as the Koprulu Sector, located 60,000 light years away from the Solar System. The planets where they make descent are Umoja, Moria, and Tarsonis. One of the ships crashes in Umoja with all 8,000 onboard being killed, while the only ship carrying the navigational system suffers damage beyond repair, effectively denying their prospect of returning to Earth.[4]

In a relatively short amount of time, the settlers successfully colonize the planets where they landed as well as founding nearby sister colonies. On Tarsonis, progress is greatly aided by the supercomputer from the colony ship that was entrusted with the navigational system. It would only take 60 years before the inhabitants of Tarsonis explore the deep space in the New World and make contact with the distant colonies, at which point the colonies come to be known collectively as the Terrans. Tarsonis and its seven sister colonies form the Terran Confederacy, becoming the dominant force within the Terran power structure. The Confederacy's policy to oppress the Morian mining guilds, which are the biggest resource operations among the colonies, triggers the Guild Wars, which lasts for nearly four years and results in the confiscation of the mining guilds by the Confederacy.[5]

StarCraft is played from a third-person 2D isometric perspective using a mouse for unit control and map navigation, similar to the PC's graphical user interface. The units are controlled in the main screen showing a detailed view of a smaller portion of the map. The minimap depicts the entire map with colored markings that locate the game units as well as the player's main view camera.

There are several different game modes, which include the official campaigns, "melee" or team matches against humans or AI, and the custom games that "use map setting," commonly abbreviated as "UMS." There may be up to 8 slots occupied by human or computer players, depending on the map in which the game is played.

The objective to win in a game of 1v1, team duel, or free-for-all is to destroy all enemy buildings. This may be achieved not only directly through skirmishes and open field battles but also various other confrontational styles that fit the player's personality as well as the map's environment. The gameplay may differ significantly depending on the accessibility of the terrain and resources of the map. A typical "normal" map is 128 by 128 grids with 4 starting non-island bases and limited available resources. Players begin with a command structure and 4 worker units in the vicinity of a mineral and gas deposit, and the game time may last anywhere between 5 minutes to 2 hours. 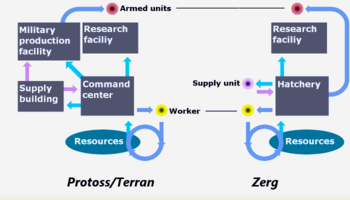 The focus in the early game lies on the expanding the "economy" in the form of resource extraction and supply, as well as "scouting" to clear fog of war and gather intelligence on the enemy. The worker units perform basic functions such as gathering resources and construction, as well as scouting in the early part of the game. Until the enemy acquires armed units, it is possible to "harass" with a scouting worker by attacking vulnerable units or preventing strategic placement of buildings on resource deposits or the base entrance by the enemy.

The early game is arguably the most important phase because it is when the players must commit to a specific strategy while facing considerable risk and uncertainty, and also because any minor loss or gain at this point is of significant consequence. Any discernible difference between the players is amplified over time due to positive feedback, with each outcome enabling the next in a possibly continual winning or losing streak. Most players are well-versed in the early strategies based on carefully crafted building order and precise timing, analogous to opening moves in chess.

Due to limited resources, players deal with trade-offs between their ability to pursue short-term and long-term goals in the beginning of a match. In the case of a "rush," a player may seek to gain critical military advantage in the shortest amount of time while sacrificing future growth. Or a player may play defensively while focusing on growing the economy or acquiring more advanced technology. Because even the most flawlessly orchestrated plans may fail without proper calculations, scouting can be a continual necessity even into the late part of the game.

As with other RTS games, multi-tasking is an essential part of the gameplay to manage multiple units and situations across the map. The player's ability to multi-task is measured in actions per minute, or "APM," which is the average number of commands given to units in a minute. Professional players are noted for their high APMs ranging in the lower 200s and 300s, whereas the APM of a casual player is much less (around 50). Because the APM count includes repeated commands, a higher APM does not necessarily yield a higher number of unique actions, although the general rule of thumb is that more is better. This is demonstrated by the fact that the players with the highest APMs (in the 500s) are mostly non-existant in the professional circuits.

The actions by the players can be categorized as micromanagement and macromanagement, or "micro" and "macro" for short. Examples of micro include control of unit actions individually or as a group, as well as placement of new constructions and rally points for newly-built units from the production lines. StarCraft's gameplay is micro intensive as it nearly lacks any automated feature (such as automatically assigning new workers rolling off the production line to extract resources, which is possible in StarCraft II), and the events occur in real time, in which a split second determines success or failure of a critical moment. Macro concerns the implementation of a strategy over a longer time frame, such as obtaining access to a key technology or unit, expanding a certain production line, or building a new base near a resource deposit.