From Citizendium
(Redirected from Square)
Jump to navigation Jump to search

This article is about the geometrical figure. For other uses of the term square, please see square (disambiguation). 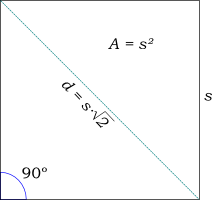 A square with some mathematical properties shown

As with all quadrilaterals, the sum of the interior angles of a square is 360 degrees; since the four angles are equal, each interior angle is 90 degrees.

times the length of one side, as can be easily shown from the Pythagorean theorem.

As the angle of the corner of the square is equal to the angle between the axes which define a plane in analytic geometry, units of area are called square unit, where unit is the unit of length. (Thus square meter, square foot, etc.)

A square is one of three regular polygons which can tile a plane with no voids, along with equilateral (regular) triangles and regular hexagons. In a tiling with squares, four squares meet at corner points.