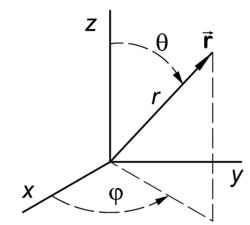 . Three numbers, two angles and a length specify any point in

. The two angles specify the position on the surface of a sphere and the length gives the radius of the sphere.

The practice of specifying locations on earth using latitude, longitude and altitude is a version of spherical polar coordinates.

Let x, y, z be Cartesian coordinates of a vector

The length r of the vector

is one of the three numbers necessary to give the position of the vector in three-dimensional space. By applying twice the theorem of Pythagoras we find that r2 = x2 + y2 + z2.

is along the positive z-axis. The sum of latitude and colatitude of a point is 900; these angles being complementary explains the name of the latter. The colatitude angle is also called polar or zenith angle in the literature.

on the x-y plane. The angle φ is the longitude angle (also known as the azimuth angle).

Note that the projection

has length r sinθ. The length of the projection of

on the x and y axis is therefore r sinθcosφ and r sinθsinφ, respectively. In summary, the spherical polar coordinates r, θ, and φ of

are related to its Cartesian coordinates by

Given a spherical polar triplet (r, θ, φ) the corresponding Cartesian coordinates are readily obtained by application of these defining equations.

The computation of spherical polar coordinates from Cartesian coordinates is somewhat more difficult than the converse, due to the fact that the spherical polar coordinate system has singularities, also known as points of indeterminacy. The first such point is immediately clear: if r = 0, we have a zero vector (a point in the origin). Then θ and φ are undetermined, that is to say, any values for these two parameters will give the correct result x = y = z = 0. Compare this to the case that one of the Cartesian coordinates is zero, say x = 0, then the other two coordinates are still determined (they fix a point in the yz-plane). Two other points of indeterminacy are the "North" and the "South Pole", θ = 00 and θ = 1800, respectively (while r ≠ 0). On both poles the longitudinal angle φ is undetermined.

So, when going from Cartesian coordinates to spherical polar coordinates, one has to watch for the singularities, especially when the transformation is performed by a computer program. Given x, y and z, the consecutive steps are

Locations on earth are often specified using latitude, longitude and altitude. These values correspond to the spherical polar coordinates introduced in this article, with some differences, however.

The geographical coordinate longitude φg (the suffix g is added to distinguish it from the polar coordinate φ) is measured as angles east and west of the prime meridian, an arbitrary great circle passing through the z-axis. Longitude is measured as the angular distance in the closest direction from the prime meridian, or, alternatively, as a positive angle to the east (counterclockwise when looking from the North Pole towards the center of the earth) and negative to the west. Longitude is always within the range −180° to +180°.

Altitude is measured from the surface— called mean sea level—of a hypothetical spheroid, or other datum, and corresponds to the polar coordinate r, with the radius of the earth subtracted. Since the earth is not a perfect sphere, neither its center nor its radius are defined in a unique manner, but for the sake of argument we ignore this and introduce rearth as the fictive radius of the earth.

Conversion from latitude λ, longitude φg, and altitude h to spherical polar coordinates is as follows:

so that the polar coordinates of New York city are

so that the polar coordinates of Melbourne are

The notational convention introduced above (θ for the colatitude angle, φ for the azimuth angle) is used universally in physics. It is in accordance with advice of the International Standards Organization (ISO 31-11, which, however, advises the use of ρ instead of r ). In mathematics—especially in the older and the European literature—the convention is very widespread, too. To quote a few prestiguous mathematical books that apply it: Abramowitz and Stegun[1] (p. 332), Whittaker and Watson[2] (p. 391), Courant and Hilbert[3] (p.195), and Kline[4] (p. 527). Until the 1960s this convention was used universally, also in mathematical textbooks, see e.g. the 1959 edition of Spiegel[5] (p. 138).

Somewhere in the 1960s it became custom in American mathematical textbooks to use a notation in which φ and θ are interchanged, see e.g. Kay[6] (p. 24) and Apostol[7] (p. 419). This was done in order to not confuse students by changing the meaning of the Greek letter θ in the transition from 2D to 3D polar coordinates, as can be gathered from the following quotation of Eric Weisstein:

In this work, following the mathematics convention, the symbols for the radial, azimuth, and zenith coordinates are taken as r, θ, and φ, respectively. Note that this definition provides a logical extension of the usual polar coordinates notation, with θ remaining the angle in the xy-plane and φ becoming the angle out of that plane. The sole exception to this convention in this work is in spherical harmonics, where the convention used in the physics literature is retained (resulting, it is hoped, in a bit less confusion than a foolish rigorous consistency might engender).

In more advanced treatises—also American—on spherical functions the old convention remains in use, see e.g. Miller[8] (p. 164). The swapping of θ and φ can only be called unfortunate, because it meant a break with the huge existing mathematics and physics literature covering more than a century, and since there exists an obvious pedagogical alternative, namely, calling the angle, which appears in the 2D polar coordinates, φ instead of θ. 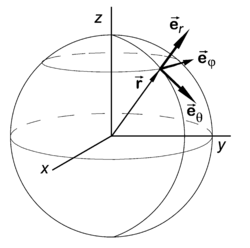 is perpendicular to the surface of the sphere, while

are tangent to the surface.

We will define algebraically the orthogonal set (a coordinate frame) of spherical polar unit vectors depicted in the figure on the right. In doing this, we first wish to point out that the spherical polar angles can be seen as two of the three Euler angles that describe any rotation of

Indeed, start with a vector along the z-axis, rotate it around the z-axis over an angle φ. Perform the same rotation on the x, y, z coordinate frame. This rotates the x- and y-axis over a positive angle φ. The y-axis goes to the y'-axis. Rotate then the vector and the new frame over an angle θ around the y'-axis. The vector that was initially on the z-axis is now a vector with spherical polar angles θ and φ with respect to the original (unrotated) frame. Expressed in equation form this reads,

where the two rotation matrices are defined by

is easily verified—it could have been postulated without reference to Euler rotations and proved by verification.

We now introduce the coordinate frame depicted in the figure on the right:

That is, the new frame, depicted in the figure, is related to the old frame along the x-, y-, and z-axes by rotation,

Inverting this set of equations is very easy, since rotation matrices are orthogonal, that is, their inverse is equal to their transpose.

Recall, parenthetically, that free parallel vectors of equal length have the same coordinate triplet with respect to a given coordinate frame. Or, equivalently, coordinate frames may be freely translated in a parallel manner. That is, the frame in the figure could have been drawn equally well with its origin in the crossing of the x-, y-, and z-axes, which, however, would have obscured the fact that

are tangent to the surface of the sphere.

In curvilinear coordinates q i the metric tensor (with elements g ij ) defines the square of an infinitesimal distance,

The Cartesian metric tensor is the identity matrix and hence in Cartesian coordinates,

Consider the following expressions between differentials, obtained by application of the chain rule,

with the Jacobi matrix having the following form,

where the matrix on the right-hand side is obtained by performing the partial derivations. By inspection it follows that

are orthogonal vectors that are normalized to unity. Hence the columns of the Jacobi matrix, which are proportional to the columns of

The infinitesimal distance squared can be written as follows

where we used that the rotation matrices are orthogonal (matrix times its transpose gives the identity matrix), so that

The rightmost matrix being the metric tensor associated with spherical polar coordinates, we find

An infinitesimal surface element spanned by two coordinates is equal to the square root of the corresponding 2 × 2 minor (subdeterminant) of the metric tensor times the infinitesimal coordinates,

For spherical polar coordinates it follows that

As an example we compute the area of the surface of a sphere with radius r,

As an example of the use of dV, the volume V of a sphere with radius R is,

We will express the velocity of a particle in spherical polar coordinates. In Cartesian coordinates velocity is the vector

and similarly the time derivatives of y, z , θ, φ, and r are given in Newton's fluxion (dot) notation. The following two equations follow from Eqs. (1) and (2), respectively,

Recalling that the unit spherical polar vectors are obtained by this rotation, we find

so that the velocity expressed in spherical polar coordinates becomes

which becomes upon multiplication by dt2 the expression for ds2 given above.

In vector analysis a number of differential operators expressed in curvilinear coordinates play an important role. They are the gradient, the divergence, the curl, and the Laplace operator. It is possible to derive general expressions for these operators that are valid in any coordinate system and are based on the metric tensor associated with the coordinate system. In the case of orthogonal systems (diagonal metric tensors) only the square roots of the diagonal elements (the scale factors) appear in the expressions. Since these general relations exist, we will not give derivations for the special case of spherical polar coordinates, but depart from the general expressions.

Above we derived the following scale factors for the spherical polar coordinates,

and we showed that the unit vectors

are obtained by two rotations of a Cartesian system.

The gradient of a scalar function Φ is,

If the vector function A is,

then its divergence is,

and its curl is given by

This is often written as

where it is understood that the determinant is computed by developing along the first row and then along the second row.

The Laplace operator of the scalar function Φ is,