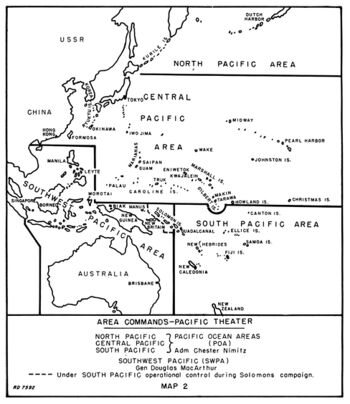 The Southwest Pacific Area (SWPA) was a World War II theater of operations under the command of General of the Army Douglas MacArthur that extended from the Philippines south through New Guinea and Australia, and west to Singapore. Its eastern border included parts of the Solomons Islands.

The existence of the area, to some extent, reflected the original Japanese barrier between Hawaii and Australia, but also reflected the interservice rivalries between the U.S. Army and U.S. Navy, and the ego of MacArthur.

Australian forces in the theater were subordinated to the SWPA headquarters, although Australia still commanded its troops in the Mediterranean.